Founded in 1886, Shrewsbury Town have, like most clubs, experienced mixed fortunes in their history.

The origins for Shrewsbury Town can be traced back to 1879 when an early version of Shrewsbury entered the Shropshire Challenge Cup. However, they were unable to raise a team for a game against Newport and disappeared from the scene.

Shrewsbury became a hotbed for football with nearly 40 teams in the county town. One of the leading sides were Castle Blues. In 1886 Castle Blues were beaten by Wellington Town in the first round of the Shropshire. A month later Wellington faced another Shrewsbury side Castle Rovers. During the game spectators invaded the pitch and started attacking the Wellington players. Three of those arrested were Castle Blues players and it spelt the end for the club who folded at the end of the 1885/86 season.

On the 20th May 1886 Shrewsbury Town were officially formed, with a number of Castle Blues players joining the club. The club began playing at the Racecourse Ground at Monkmoor, but moved to Ambler’s field in 1889, Sutton Lane in 1893 and the Copthorne Barracks Ground in 1895.

When football resumed after the First World War, Town had their first golden era. A new stand was built in October 1922 and Town ended the 1922-23 season as Birmingham League Champions for the first time.

Town continued to improve and in 1938 they won the Midland League at the first attempt. They also reached the final of the Welsh Senior Cup and came from 2-0 down to draw 2-2 in front of around 14,500 fans. Extra time wasn’t played and Town won the replay the following season.

Town’s first real footballing legend was Arthur Rowley. Rowley joined Town from Leicester City and scored 38 goals in his first season, helping Town gain promotion from the Fourth Division. Rowley scored 152 league goals for Town taking his overall career tally to 434 goals, a league record that remains to this day. Rowley retired from playing in 1965, but continued to manage Town and guided them to the FA Cup Fifth Round two years in a row.

Perhaps Town’s most famous side is that of 1979. Managed by Graham Turner, Town has been promoted to the second division for the first time in their history thanks to a 4-1 victory over Exeter City. Town remained in the second tier for 10 years, including consecutive eighth-place finishes in 1984 and 1985.

Town began to drop down the leagues and although they survived on the final day of the 1999/2000 season, they dropped out of the league in 2003. Earlier in the season Town had caused one of the biggest upsets in FA Cup history, beating Everton 2-1 thanks to two Nigel Jemson goals. But, they struggled to find another win after that and were relegated to the Conference.

Thankfully, the stay in non-league was short-lived as Town bounced back at the first time of asking. Scott Howie was the hero saving three penalties as Town beat Aldershot in the play-off final. Trevor Chalis scored the winning penalty at the Britannia Stadium.

Town reached the League Two Play-Off Final in their final season at the Gay Meadow, losing 3-1 to Bristol Rovers, before leaving their home on the banks of the River Severn to move into a new stadium built for the 21st Century.

The 10,000 all-seater New Meadow hosted its first game on 14th July 2007 with Town beating the A-Line All Stars 4-0. The new stadium has brought about considerable success.

Town legend Graham Turner returned to the club in 2010 and guided them to League Two promotion in his second season with the club, before preserving their status the following season.

Town dropped back down to League Two in 2014, but the stay was short-lived as new manager Micky Mellon guided Shrewsbury to promotion in his first season as manager. Mellon enjoyed considerable success at Town, reaching the fourth round of the League Cup in 2014 where they faced Chelsea in front of a Greenhous Meadow record of 10,210. Before reaching the FA Cup Fifth Round the following season, losing to Manchester United.

Mellon left the club in October 2016 and was replaced by former Grimsby Town Manager Paul Hurst. Hurst took over a side that sat bottom of League One, but a brilliant second half of the 2016/17 season saw Town escape relegation.

The 2017/18 season then became a memorable one for everyone connected with the club. The season started with a 16-game unbeaten run in the league and ended with two trips to Wembley. The first came in the Checkatrade Trophy Final as Town were beaten 1-0 by Lincoln City. Unfortunately, the run of defeats a Wembley continued just seven weeks later as they were beaten 2-1 by Rotherham United in the Sky Bet League One Play-Off Final. Those defeats mean that Shrewsbury have now lost all five of their trips to the National Stadium. Just two days after the Play-Off Final Paul Hurst left to join Ipswich Town and he was replaced with John Askey from Macclesfield Town.

Like most recent seasons, the most exciting games of the 2018/19 season came in the FA Cup. Salop beat Salford City and Scunthorpe United in the first two rounds to set up a tie away at Stoke City. Town came from two goals down to beat the Potters 3-2 and earned a glamorous match-up against Premier League Wolverhampton Wanderers. Once again, Shrewsbury came from two goals down to set up a replay at Molineux but, despite a spirited performance, they couldn't create history and lost out by three goals to two in the Fourth Round Replay. Askey was sacked in early November after a poor start in the league saw Town pick up just two wins from their opening 14 games. His replacement, Sam Ricketts, didn't fare much better but guided Town to a lower-mid-table finish of 18th.

The 2019/20 season was curtailed after 34 league games due to the outbreak of COVID 19. Shrewsbury were sat in 15th place at the time with ten wins, 11 draws, and 13 losses so far in the season. Again, the FA Cup made headlines as Shrewsbury drew Liverpool in the Fourth Round. After beating Bradford City, Mansfield Town, and Bristol City, Salop found out they were to host one of the biggest clubs in the world at the New Meadow. After the footballing giants took a two-goal lead, all seemed lost until Jason Cummings popped up with two late goals to take the game to a replay at Anfield. Salop faced a youthful Liverpool team and disappointingly lost 1-0 due to a freak own goal.

Sam Ricketts made it as far as November 2020 before he was relieved of his duties and replaced by Steve Cotterill. That season was played behind closed doors except for an eerie game at the New Meadow against Accrington Stanley that was watched by a reduced crowd of 2000 people. Town finished 17th that season with 54 points from 46 games.

Last season saw Town finish 18th with 50 points. Impressive runs over the Winter months and during March meant Shrewsbury were rarely in danger of facing the drop. Club legend, Shaun Whalley, marked his 250th appearance for the club with a cameo against Oxford United following a four-month injury and the FA Cup brought yet more excitement to Shropshire. Shrewsbury earned another visit to Anfield in January, 2022. Salop were forced to contend with a much stronger line-up that day as Virgil Van Dijk, Andy Robertson, Ibrahima Konate, Fabinho, Roberto Firmino and many other world class names took to the field. The moment of the season came in the 27th minute when Daniel Udoh snuck in between Van Dijk and Konate and poked little Shrewsbury Town in front at Anfield. Liverpool would go on to score four more goals but that didn't ruin the occasion for Salop, who will always remember the elation of leading at Anfield. 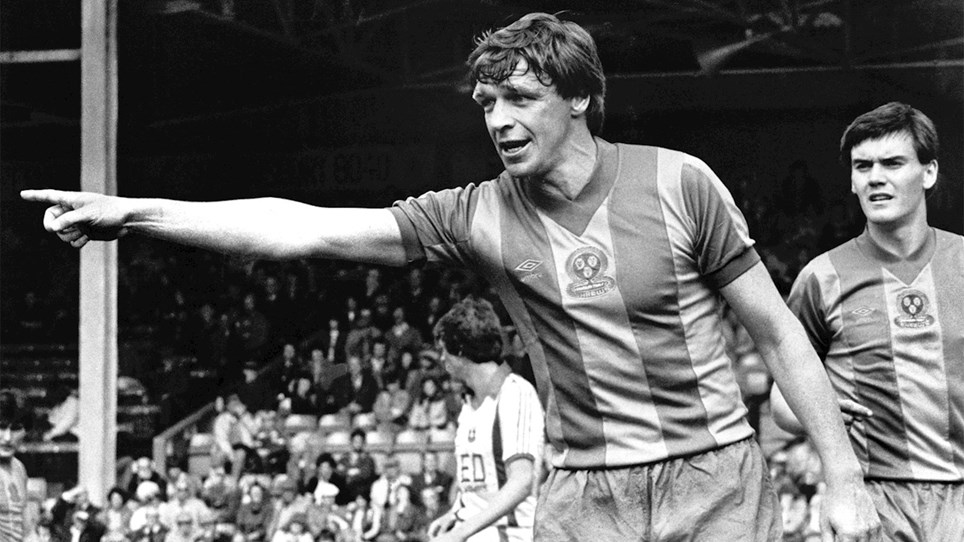 Umbro | Part of the fabric of Shrewsbury Town


Take a look at Town's Umbro kit history in pictures as we welcome the supplier back to the Club. 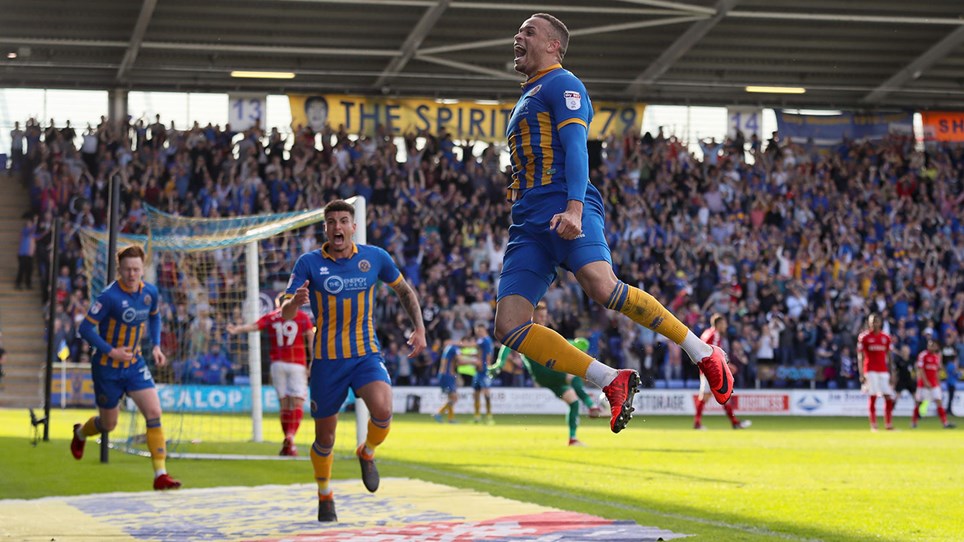 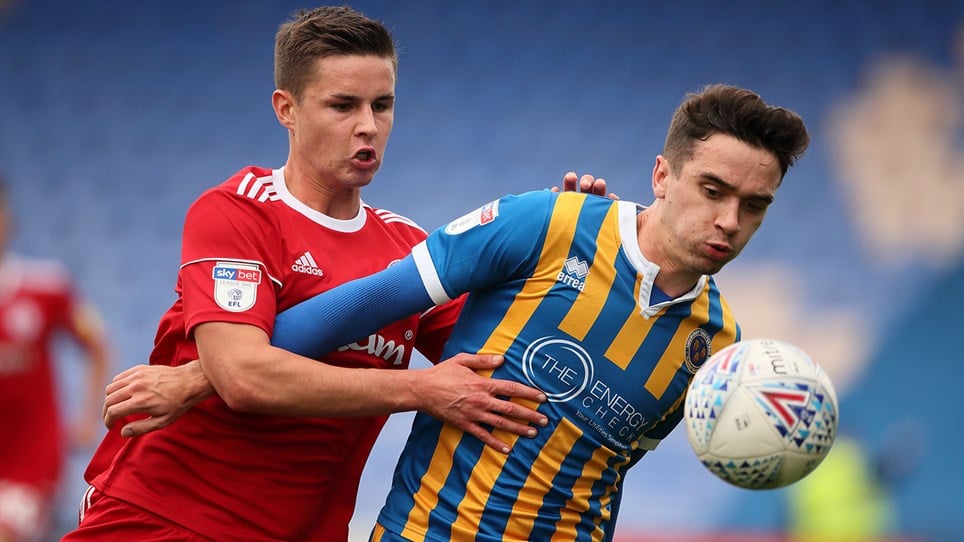 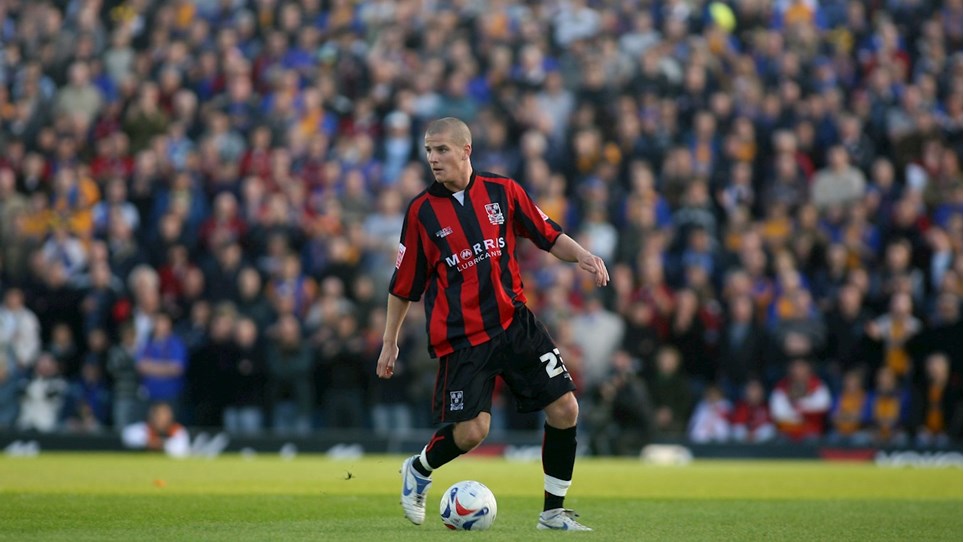 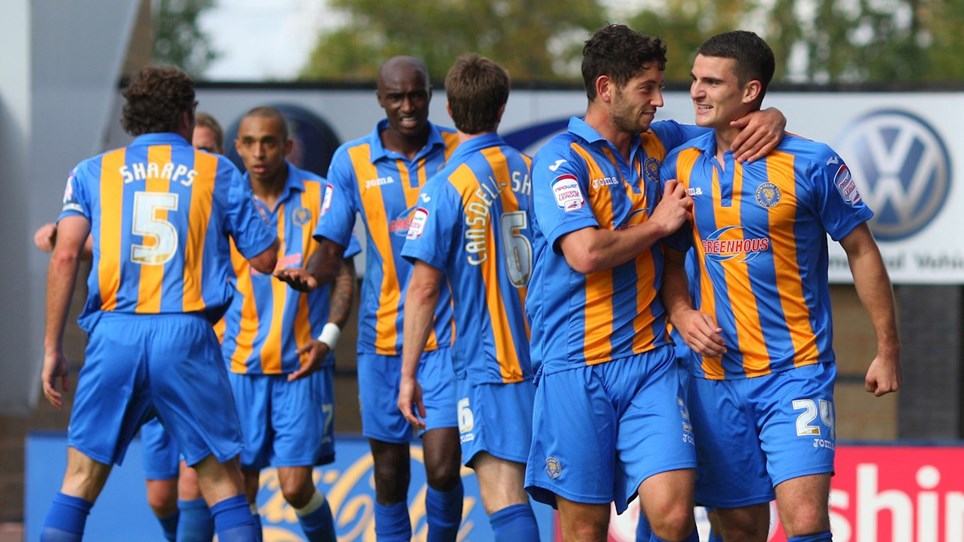 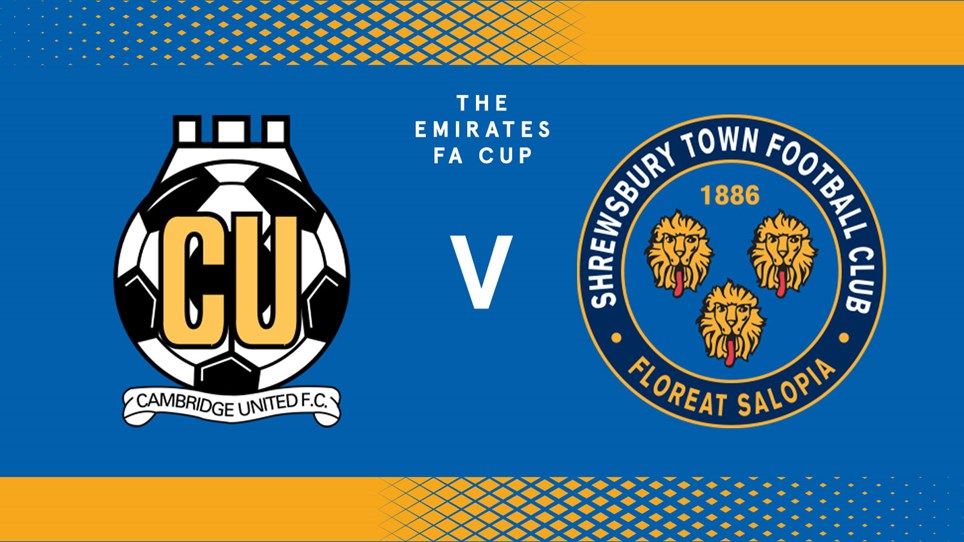 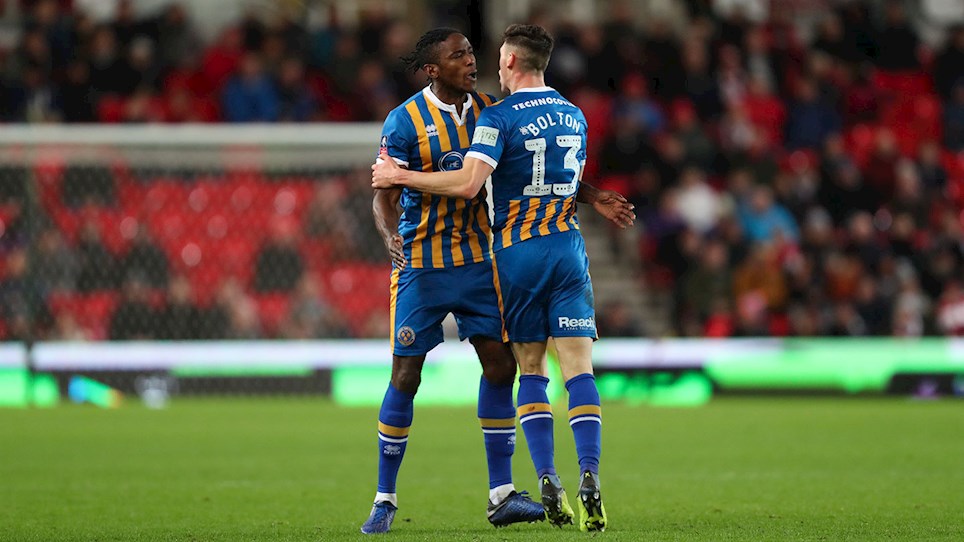 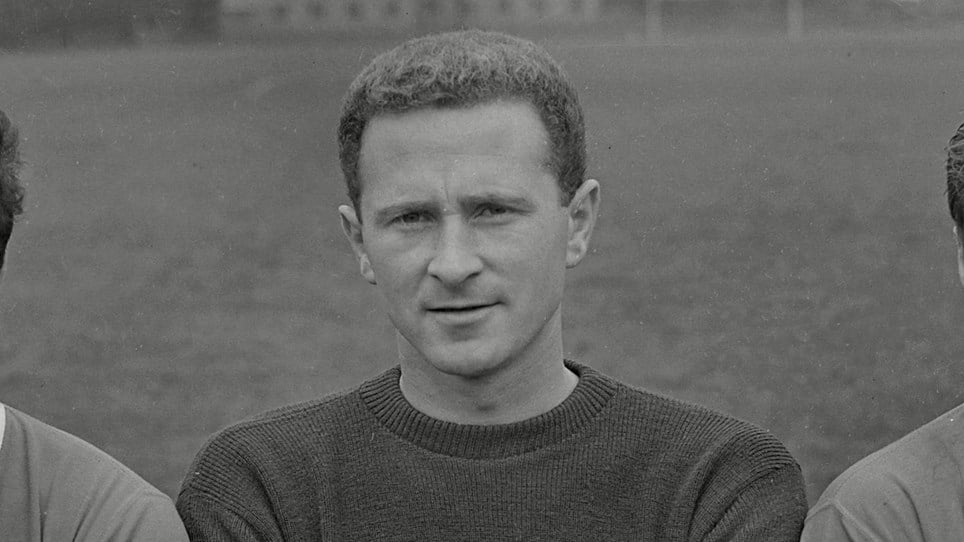 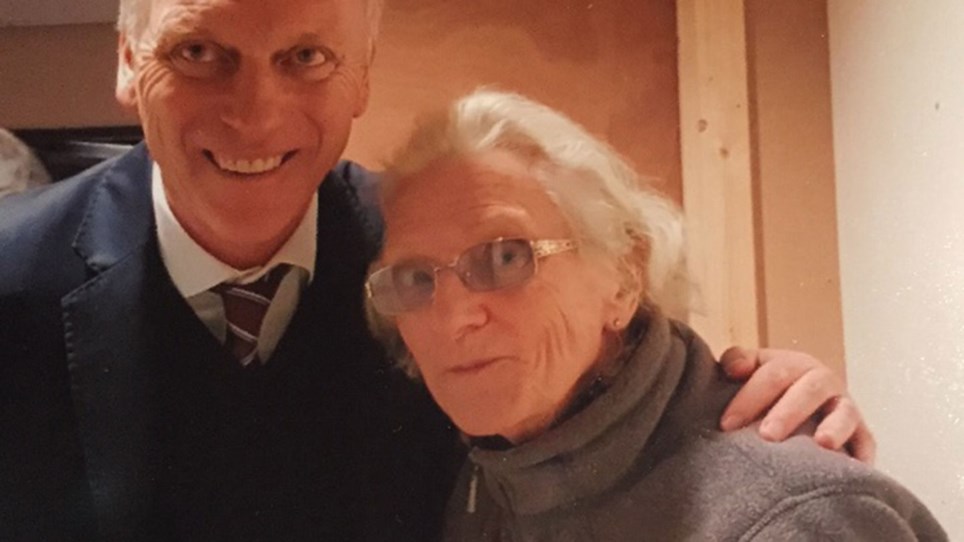 
Everyone at Shrewsbury Town were very saddened to hear about the passing of club life-member Ruth Williams. 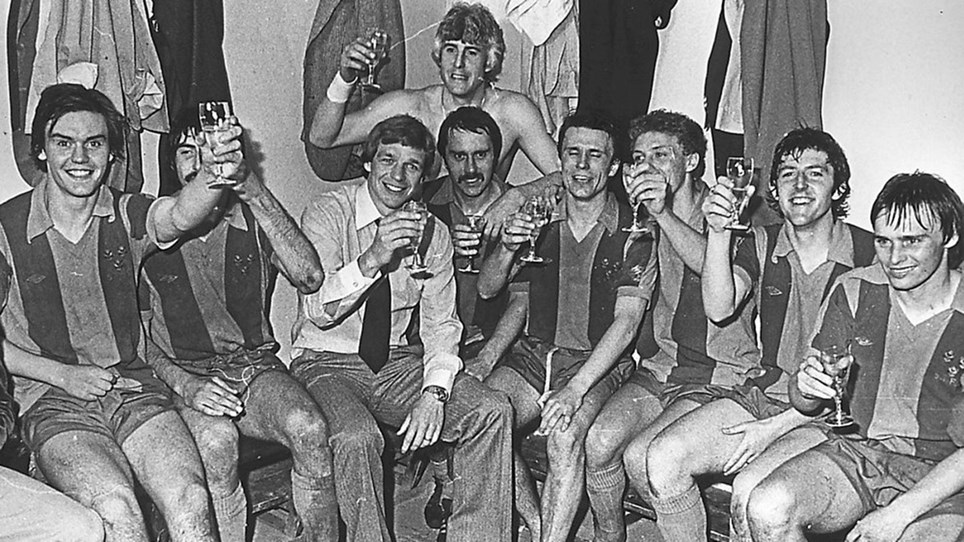 
In Town Talk our matchday programme we have looked back at the 1978/79 season, here is Bob Davis match report from the final game of the season at home to Exeter City 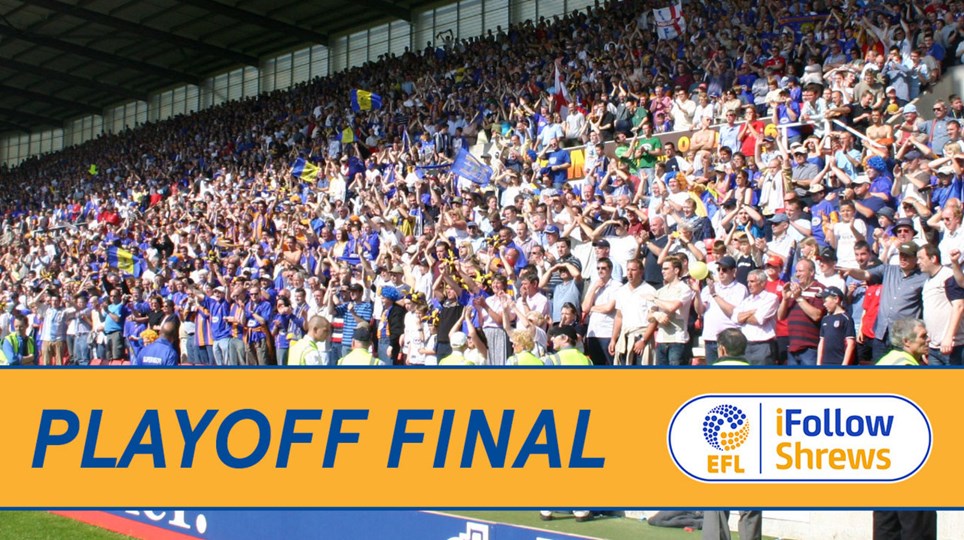 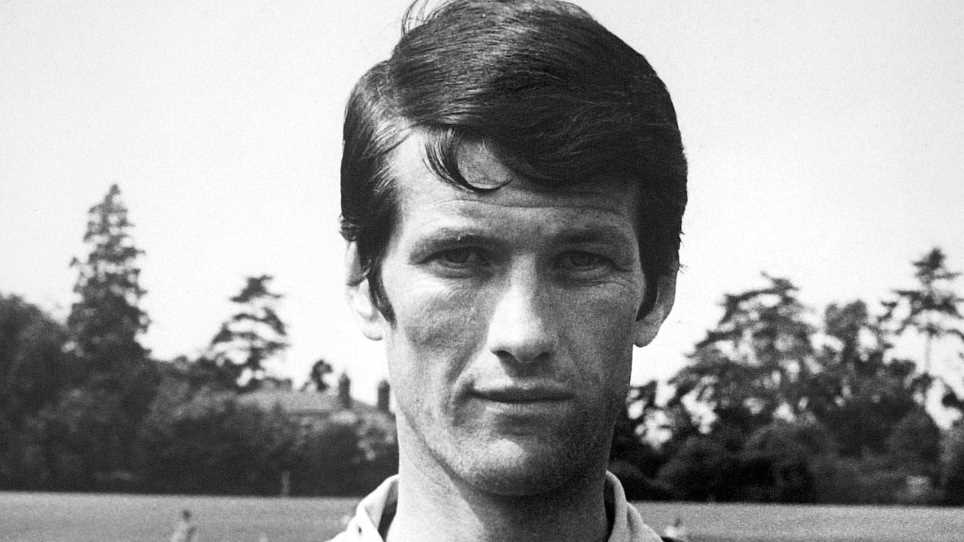 
Club legend has passed away