With most of League On playing on Saturday and on Tuesday night, we're playing catch up and have a chance to close the gap on Blackburn who dropped a couple of points against Gillingham. The team we face is Bradford City who started the season well but have found things particularly difficult since the start of 2018. The first few months up to January saw the Bantams win fourteen times in twenty five games in League One but since then they've won just twice in fourteen games. The form cost previous manager Stuart McCall his job and ex-Leeds and Sunderland manager Simon Grayson took the reins. His first game finished with a decent draw at Charlton but since then Bradford have won once at home to Gillingham and lost five every other game without scoring.

Squad News
Junior Brown is the only man missing for Town with Alex Rodman and Toto Nsiala now fully fit.
Simon Grayson could make a host of changes after Bradford’s 5-0 defeat to Blackpool last weekend.

Summary
This looks like a foregone conclusion on first inspection but there are several factors that could influence the result. The game is live on T.V. So although they are in a sticky patch of form and are pretty comfortable in League One, there is personal pride to play for in front of a large audience. Another factor is how we respond to the result at the weekend and having watched this team come back from disappointment rather well this season, I wouldn't be at all surprised to see a great performance. 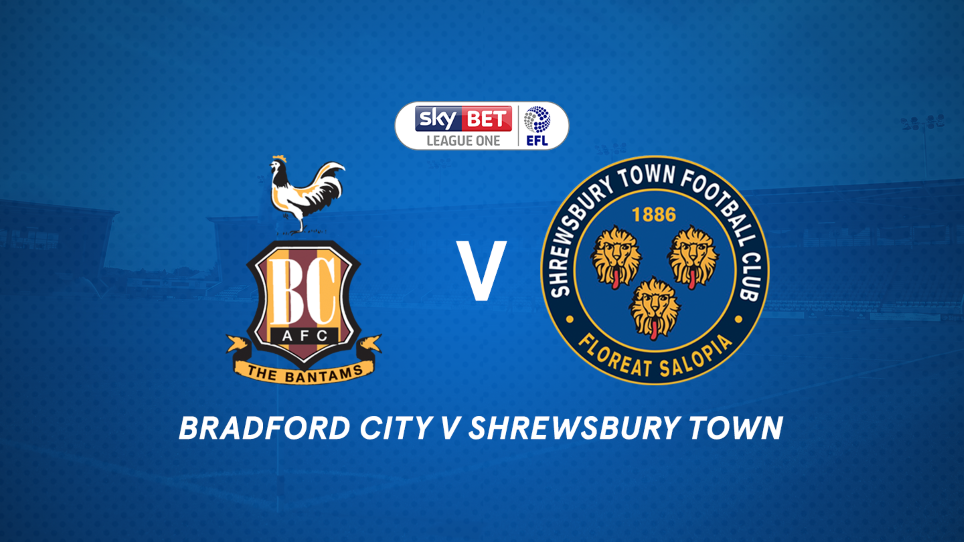 
Trip to Valley Parade to be shown live on Sky Sports

Shrewsbury Town were forced to take a draw as they were reduced to 10-men against Bradford. The hosts had enjoyed the better of the first-half and Town had Dean Henderson to thank for two fantastic saves. After the break Town started brightly, but their lives were made more difficult when Omar Beckles was sent-off for a second yellow card on 60 minutes. Town kept pushing despite being down to 10-men, but in the end they had to settle for a point.

Team News:
Paul Hurst makes two changes to the side that was beaten 1-0 by Lincoln City at Wembley on Sunday. Top scorer Stefan Payne returns to lead the line in place of Carlton Morris, whilst Alex Rodman is fully over his back injury and comes in for Nathan Thomas on the left-wing. Bradford make five changes and bring in former Town skipper Nat Knight-Percival.

First-Half:
It was the Bantams that started the game brighter and 10 minutes in they forced Dean Henderson into two wonderful saves. The first came after Stephen Warnock’s cross was headed back across goal by Charlie Wyke and it was met by Alex Gillead who struck a rasping shot from 12 yards, which Henderson did brilliantly well to tip over. From the resulting free-kick Bradford created another good chance as the Town failed to fully clear their lines and Warnock tried his luck from 20 yards, but Henderson did brilliantly to get across to his right and palm it away.

The Bantams were then presented with another good chance as Omar Beckles was judged to have brought down Kai Bruenker on the edge of the box. Beckles was shown a yellow card for the challenge and Tony McMahon stood up to take the free-kick, but his shot went inches with of the post with Henderson at full stretch.
At the other end, Town had a couple of shots blocked. The first came from Shaun Whalley after a free-flowing passing move and the second fell to Bryn Morris, but he couldn’t get the desired connection with his volley after finding space on the edge of the area.

There was a slight worry for Town 20 minutes in when Beckles illegally brought an end to a Bradford counter-attack. The home fans were calling for Beckles to be shown a second-yellow, but referee Webb gave him a final warning. The resulting free-kick was whipped into the box and found Timothee Dieng at the back-post, but he hesitated and James Bolton got back to make an important block.

Both goalkeepers then exchanged saves. The first was from Dean Henderson as Kai Bruenker played in Tyrell Robinson on the left and the pacey winger shot across the goal, but Henderson did well to hold on. At the other end, Town created their best opportunity of the half when Shaun Whalley played a superb 40 yard pass to find Jon Nolan unmarked in the area, but Nolan’s first-time shot was straight at Doyle who held on.

Toto Nsiala then found himself in the referee’s notebook after putting in a strong tacked on Tyrell Robinson. It looked harsh on the big Congolese defender who appeared to have got contact on the ball, but Mr Webb felt it was slightly too aggressive.

It was actually Town who ended the half on top as they put some pressure on in first-half stoppage time, but they couldn’t create anything clear cut with Shaun Whalley having an effort from the edge of the area blocked.

Second-Half:
The second-half took a while to get going and it wasn’t until 10 minutes into the half that either side created any opportunities. That chance fell the way of Town as Alex Rodman picked the ball up in his own-half and drove at the Bradford defence. He then unleased a powerful shot from 30 yards which went inches over the bar.

A couple of minutes later Town produced another good chance as James Bolton and Shaun Whalley connected down the right. Whalley whipped the ball into the box and it was met by Jon Nolan but his first-time shot was brilliantly saved by Colin Doyle, low to his right.

15 minutes into the half Town went down to 10-men as Omar Beckles was shown a second yellow card. The Town defender overran the ball as he was looking to get forward and ran into Nat Knight-Percival. It appeared to be an accidental collision but Beckles was on a final warning and the referee decided there was enough contact to send him off.

With Town now down to 10-men they decided to make a substitution by bringing on Carlton Morris in place of Bryn Morris as Paul Hurst opted for a 3-4-2 formation.

Town actually adjusted well to going down to 10-men and it took over 10 minutes for the home side to create any chances of note. Their best opportunity fell the way of Charlie Wyke as Tony McMahon crossed from the by-line, but Wyke’s looping header went inches over the crossbar.

At the other end, Town continued to push forward and a free-kick from Shaun Whalley almost created an opening. Toto Nsiala managed to head the ball back across the face of goal, but Carlton Morris was beaten to the ball by a Bradford defender and they managed to clear. Morris then went for the spectacular, but his attempted dipping volley lacked the required dip.

With just under 10 minutes remaining Paul Hurst turned to his bench for the second time on the evening and this time it was a straight swap with Lenell John-Lewis replacing Stefan Payne upfront.

As the game ticked towards added time Shaun Whalley won Town a corner. His delivery was punched away by Doyle, but only as far as James Bolton who tried to lash the ball goalwards, but it his effort from inside the box went well wide.

With seconds remaining Town almost put themselves in huge trouble when Dean Henderson tried to come a punch a Bradford free-kick but he judged it all wrong and the ball fell to an opposition man, but Town got bodies in the way and hacked it clear.


Trip to Valley Parade to be shown live on Sky Sports

Shrewsbury Town are pleased to announce that the club will paying for the supporters coaches for next month’s Sky Bet League One trip to Bradford City.

It will mean the cub will pay for those who are travelling with the Away Travel Club and the OSC Travel Club.

The move is recognition for the superb support that has followed Paul Hurst and the team all over the country this season.

Town CEO Brian Caldwell is hoping the move will reward those fans that have travelled all over the season.

“The Bradford game’s been moved to the Thursday after the Checkatrade Trophy final and I think we all appreciate that being a Shrewsbury fan is an expensive business at the moment”, said Brian.

“I think a lot of people will have spent a lot of money going to Wembley, so by offering to pay for the normal coaches run by the Away Travel Club and the Official Supporters Club for the Bradford game, hopefully we can give a bit back to those loyal supporters that will travel to Bradford, because we need their support at Bradford as much as we need at Wembley in the Checkatrade Trophy Final.

“The support we’ve had both home and away has been phenomenal this season. The away support has been fantastic in really getting behind the team and hopefully it’s helped the results we’ve had this season on the road.

“It’s been a good season to be a Shrewsbury fan, but hopefully in some ways this will reward those loyal fans that do go away from home by giving them a free trip to Bradford.”

For more details on the coaches to Bradford contact -


Ticket details for our trip to Northern Commercials Stadium