Marcus Braddock looks ahead to the visit of Charlton Athletic

Town are back in action tonight with the visit of eighth placed Charlton Athletic. The Addicks are one of a number of teams hoping to finish in the play-off positions but their last three results have seen them fall off the pace a little. It's left them 2 points behind the play-offs having played one more game than 6th placed Plymouth.

When we last played Charlton they'd managed seven clean sheets, four at home and three away. Since then they've added another two at home and one away.

In away games, Charlton have averaged 1.3 points per game, 0.1 better than the league average.

62% of the goals the Addicks have conceded have been scored in the second half.

Their worst fifteen minutes of away games is the final fifteen of the game with 9 goals conceded in 20 away games.

Their best fifteen minutes is the middle segment of the second half with 8 goals scored and 2 conceded between the 60th minute and the 75th.

Paul Hurst will be without the suspended Omar Beckles and long-term absentees Abu Ogogo and Junior Brown.

We all know what is at stake for us; a win sees us close the gap between Blackburn and ourselves to just 2 points with four games to play. Charlton will be wanting to avenge our win at the Valley in February and enhance their chances of a play-off position. Defensively we will be tested without Omar Beckles and Abu Ogogo and we will need to counter the inevitable pressure that will be placed on these areas. If we can do that and also get a couple of goals then the pressure is on Blackburn not to slip up at home to Peterborough on Thursday.

Visitors take the points after two second half goals

Team news:  Sam Jones is introduced into the Town starting 11, making his full debut and replaces Bryn Morris who is on the bench. Omar Beckles is suspended for this game due to picking up two yellow cards in the Shrews game away at Bradford City. Max Lowe replaces the defender in the left back position.

A disappointed Town side lost out to Charlton 0-2 after goals from Jason Pearce and Josh Magennis.

A good first half from Town want enough as Jason Pearce’s header and Josh Magennis’s chipped goal gave promotion-chasing Charlton all three points upon their visit to The Montgomery Waters Meadow.

The first 10 minutes of the game went by without any real goalmouth action, with both sides battling hard for possession. Shortly after, Sam Jones created some space for Shaun Whalley with a driving run. Whalley chipped the ball over the Charlton defensive line but Carlton Morris couldn’t get on the end of the ball.

Town were looking to make things happen in the Charlton half. Ben Godfrey went on a bursting run round the side of the Addicks defence. The defensive midfielder let off a shot but the ball went the wrong side of the post and hit the side netting.

A good counter attack started all the way from the back by Dean Henderson earned the Shrews a corner. Whalley delivered in a low driven ball but the winger couldn’t find a Town body and Charlton cleared the ball.

Charlton had their own chance against the run of play in the 26th minute. Addicks number 14 Tarique Fosu burst into space down the left wing but James Bolton rushed back well and blocked the winger’s shot, keeping the game level.

Town were starting to dominate the ball, with the majority of the possession being in the opposition’s half. Some wonderful passing play in the midfield by Sam Jones, Jon Nolan and Whalley eventually found Godfrey who’s long range shot flew just above the bar.

Both sides went into the break level on the score line. Town had a bright first half, playing some good passing football but couldn’t find an end product

Aristote Nsiala was given a yellow card shortly after the second half resumed for a miss-timed tackle on Fosu as the ball just passed the defender.

Shortly after that, half time substitute Abo Eisa was pulled down by Charlton number 19 Jake Foster-Caskey, the Addicks player was also given a yellow card.

The first ten minutes of the second half started out in scrappy fashion. Nolan was looking positive with the ball and was driving towards the Charlton back line. Ezri Konsa fouled Nolan and was given a yellow card. The free kick was delivered in but the referee blew for a foul.

The game was heating up with Town pressuring the back four of the Addicks. A wonderful lofted pass by Nolan to Carlton Morris opened up space on the left wing for the striker in the 58th minute. Morris dribbled past one defender and shot towards goal, only for the ball to be blocked by Patrick Bauer.

The next 10 minutes didn’t produce any real chances for either team. The Addicks and Town midfields were both fighting for possession with both defences cancelling out each others attacking moves.

Charlton were the first to break the deadlock. Foster-Caskey swung in a dangerous free kick from the left wing and the Addicks captain Jason Pearce rose above the defence and notched a header home past Henderson, giving the visitors the lead with 15 minutes left in the game.

Charlton were doing a good job of sealing out the Shrews attacks but Town were mounting on the pressure. As the game was drawing to a close Nolan had a shot from outside of the box but the ball fizzed wide of the post.

A mistake by Dean Henderson gifted Charlton a second goal. Henderson tried to clear his lines but lofted the ball into the air and Josh Magennis chipped the ball over the keeper to double their lead.

Town will be disappointed but Charlton held on and took all three points back to The Valley to add to their promotion push.

Tickets are now on sale for our home game with Charlton Athletic.

Ticket prices for a 2017/18 Sky Bet League One fixture can be found here.

U8s go free to every home SkyBet League One game during the 2017/18 season. 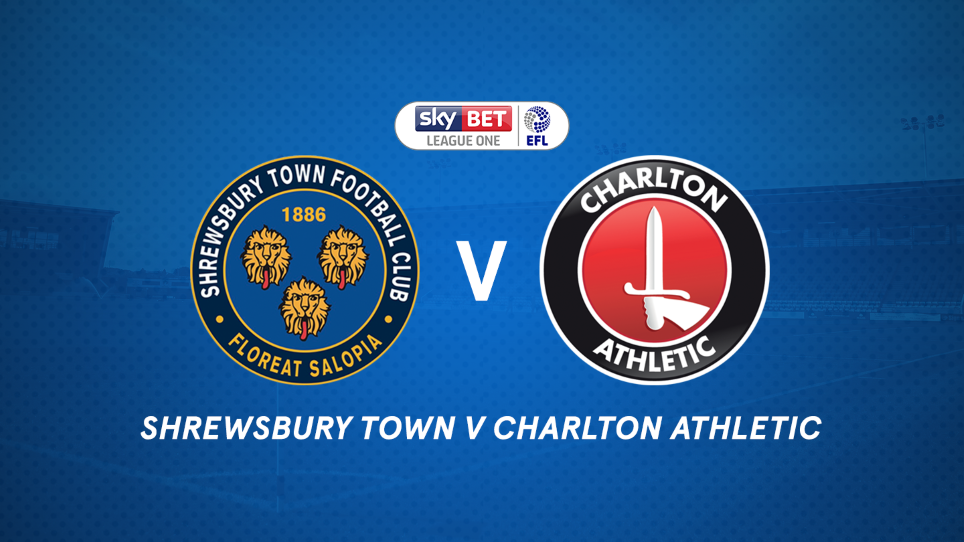