Marcus Braddock looks ahead to the Emirte

Shrewsbury Town head back to Montgomery Waters Meadow for the second round of the F.A. cup this weekend with Morecambe standing between us and round three. The Shrimps currently sit in 21st position after a difficult season but look to have stabilized in League two with just one defeat in a six game sequence that also included two wins and two draws. The last time Morecambe won was against Wycombe at home in League Two on November 11th and their last defeat was on November 21st when they lost 1-0 at home to Crewe. They got to this round of the cup via a 3-0 win at home to Hartlepool with Kevin Ellison, Andy Fleming scoring one each before an own goal put the tie beyond Hartlepool.

Shrewsbury-Abu Ogogo is serving the final game of his suspension, Junior Brown is still a long way from rehabilitation after his operation.  Dean Henderson will sit this one out as Man United haven’t given him permission to play in the FA Cup.

Another difficult game made a little more interesting given our slight slip in form and The Shrimps slight improvement. Morecambe are more than capable of surprising use, a quick look through their goals shows a team able to pass it around nicely but also able to take advantage of sloppy defending. So we will have to be at our best or we will be punished. As an aside, it's nice to see Aaron Wildig returning, I remember him having a rather deft touch and it's good to see him settled with a good club.

Just a little reminder that Shrewsbury Town in the Community are asking fans to donate tinned food to the Shrewsbury Ark. The Ark is a safe drop in centre for homeless and vulnerable people, providing basic things that most people take for granted. A collection point will be at the football clubs main reception for the Morecambe game on 2nd December and the Blackpool Game on 16th December. I'll be dropping off a few tins, hasn't cost me a great deal but someone out there may be a little warmer thanks to you.  Please give if you can, you could even pop into the local supermarket on your way to the game.

Town into third round with a 2-0 victory

Shrewsbury Town reached the third round of the Emirates FA Cup with a comfortable 2-0 victory over Morecambe. The League Two side were well in the game in the opening 20 minutes, but two goals in three first-half minutes, the first from Alex Rodman and the second a Shaun Whalley penalty, made things difficult for the visitors. The second-half was a quieter affair as both sides struggled to test the opposing goalkeepers, although Craig MacGillivray did pull off a good late save to maintain Town’s clean-sheet. The victory means that Town will now be joined in the hat for the next round by the likes of Manchester United and Arsenal.

Paul Hurst said in the week that he would pick a strong side for today’s game and he has done just that by making just one enforced change. Dean Henderson hasn’t been given permission to play in the Emirates FA Cup by Manchester United, so Craig MacGillivray is the goalkeeper. That means that Cameron Gregory comes onto the bench as the back-up ‘keeper and other than that it’s same again for Town.

Town almost made the perfect start as within the opening two minutes Alex Rodman hit the post. Shaun Whalley did well on the right and his ball eventually found its way to Rodman on the left, who turned the right-back inside out before shooting low to Barry Roche’s right. The shot cannoned off the post and hit Roche on the back before going behind for a corner.

Town looked dangerous whenever they came forward and Shaun Whalley was the next to test Roche when he played a neat one-two with Nolan before shooting left footed from just outside the box, but he never really got hold of it and Roche made a comfortable save to his left.

After a bright opening five minutes, it took Town until the 23rd minute for them to have their next meaningful effort on goal. Some neat play between James Bolton, Bryn Morris, Jon Nolan and Shaun Whalley on the right hand side saw the former find space to deliver a cross. His cross found the feet of Stefan Payne, who was allowed space to turn and shoot, but his shot went just wide of the post.

There was a sense that frustration was just started to grow around the Montgomery Waters Meadow, but that feeling evaporated in the 33rd minute as Shrewsbury took the lead. Town built nicely from the back and Beckles found Whalley on the right-hand side. Whalley reached the byline before firing in a ball across the six yard box and Alex Rodman was on hand at the back post to side foot past Barry Roche.

Just three minutes later Town were presented with the perfect opportunity to double their advantage. Jon Nolan latched onto a Shaun Whalley pass over the top and found himself in acres of space behind the Morecambe defence. He looked to round Barry Roche but the Morecambe ‘keeper brought him down in the penalty area and referee Craig Hicks pointed straight to the spot. There were calls for the Morecambe ‘keeper to be sent-off, but double jeopardy rules meant that he only received a yellow card. Shaun Whalley was given the honour of taking the spot-kick and he sent Roche the wrong way, smashing it into the goalkeeper’s left.

Jim Bentley clearly wasn’t happy with what he had seen in the first-half and he made two changes at the break. Alex Kenyon and Patrick Brough made way for Vadaine Oliver and Aaron McGowan. It led to a change of formation for the visitors who moved form a 4-2-3-1 to a 4-4-2.

The changes certainly allowed the visitors to enjoy a greater share of possession in the first ten minutes of the second period, but they struggled to test Craig MacGillivray, who just had to claim a couple of crosses.

At the other end, Alex Rodman should have added a third when he expertly brought a Shaun Whalley cross down at the back post, but when he tried to cut onto his right foot he let the ball get away from him and they chance went begging.

Paul Hurst turned to his bench for the first time of the afternoon with just under an hour gone and Louis Dodds replaced Ben Godfrey. The change meant that Dodds moved in behind Stefan Payne and Jon Nolan joined Bryn Morris in a deeper midfield role.

Dodds almost got himself on the scoresheet twice in quick succession. The first chance saw him steer a Shaun Whalley cross towards goal, but Roche made an acrobatic save and then 30 seconds later Dodds shot inches wide from the edge of the box.

Meanwhile, Morecambe created their best opportunity of the game when veteran midfielder Garry Thompson tested Craig MacGillivray from range, but the Town ‘keeper got down well to hold onto the shot.

Goalscorer Rodman was then replaced by Arthur Gnahoua for the final 20 minutes as Paul Hurst looked to give some members of his squad game time.

Gnahoua’s introduction seemed to give Town a bit more energy than they had shown for much of the second-half and they had a five minute spell camped in Morecambe’s defensive third, but the best they could muster were a couple of blocked Shaun Whalley shots.

Town then made their third and final change of the afternoon with 10 minutes to go as Town’s other goalscorer, Whalley, was also brought off and Carlton Morris came on.

Town then produced a lovely move as Gnahoua, Dodds and Bryn Morris combined to set Bryn free on the left side of the box. He cut the ball back for Dodds, but he couldn’t sort his feet out and the shot went just wide.

Craig MacGillivray made a fantastic stop with five minutes remaining after James Bolton gave the ball away and Callum Lang got himself one-on-one with MacGillivray, but the former Walsall ‘keeper stood tall and threw out a strong left hand to make a fantastic save.

But, that was the closest Morecambe came and Town almost made it three in stoppage time, but Roche did well to keep out a Carlton Morris effort.

Ticket details for the Emirates FA Cup game with Morecambe

Ticket details have been confirmed for Shrewsbury Town’s Second Round Emirates FA Cup tie with Morecambe at the Montgomery Waters Meadow.

Town will take on The Shrimps on Saturday 2nd December with a 3pm kick-off.

We have been in discussions with Morecambe and they have kindly agreed to the same prices and structure as our First Round game against Aldershot Town.

Full ticket details are as follows:

This game is not included in the Season Ticket and holders will need to purchase a ticket for the game.  Their existing season ticket seat will be held until Friday 1st December.

Season Ticket holders will have the game added to their season ticket and they will use this to access the game, no physical tickets will be provided.

FanCard holders can purchase the game at full price and select the option to have the game added to their FanCard.

The Youth Group offer is not valid for Emirates FA Cup games. 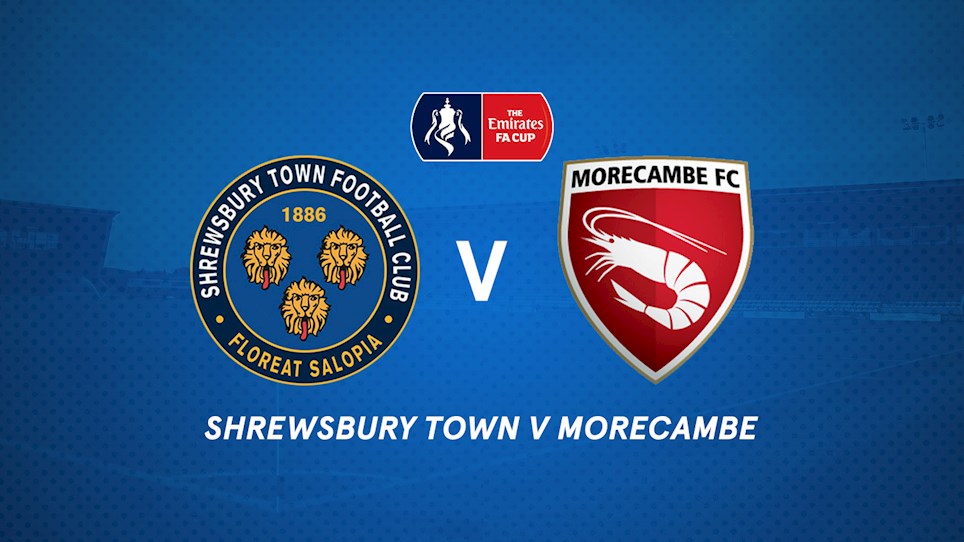 
Ticket details for the Emirates FA Cup game with Morecambe