After Tuesday's eventful 1-1 draw at Northampton, Shrewsbury Town return to Montgomery Waters Meadow to take on 19th placed Wimbledon. Although the Dons currently occupy a lowly position in League One, their form has been pretty good of late. They've suffered just one defeat in their last five games and that was against league leaders Blackburn but they're still too close to the relegation spots for comfort. Just behind the Wombles are Northampton and Oldham, both of whom are just a win away from leap-frogging them, so there is plenty of motivation for the Dons and with changes required in midfield for Paul Hurst, they'll be hoping to punish any uncertainty from the home team.

Top Scorer
Last season's top scorer Lyle Taylor is also this season's top scorer so far with twelve league goals and four in the cups. He started his footballing life as a trainee with Millwall and in total he's played for ten clubs which seems a lot for a 27-year-old but many were loan spells. He's been with the Dons since 2015 when he made the move from Scunthorpe and since then he's scored 42 times in 122 league appearances (15 sub appearances).

Clean Sheets
Ten. Five at home and five away.

Team News
Abu Ogogo will be missing for the next four League One games after his red card on Tuesday. Injuries mean that Ben Godfrey will also be missing, as will James Bolton. Dean Henderson will be on international duty.
Cody McDonald wont feature because of a metatarsal injury.

Summary
This weekend we're missing four quite influential players, five if you include Junior Brown, so we're going to see changes in personnel and possibly in formation. I'm sure Wimbledon will be keen to test our resolve in the face of change but we've absorbed the loss of players this season and kept performing and I think we can do that again. Much will depend upon how well we deal with Lyle Taylor, the 27 year old has been extremely productive this season and has scored three times in his last three away games. If we can do that then our current unbeaten run in League one will be extended to six games with eight to play.

Shrewsbury Town made it seven games unbeaten as they beat AFC Wimbledon 1-0. The first-half was a non-event, but Town took the lead just nine minutes after the break as Stefan Payne turned the ball home from eight yards after a good cross from Luke Hendrie. Town looked comfortable holding onto their lead until the final five minutes when Bryn Morris was sent-off for a second-yellow card, but they still managed to see the game out and pick up an important three points.

Team News:
There's a very different feel to the Shrewsbury Town line-up this afternoon with a few regular players missing for a variety of reasons. Dean Henderson is on international duty so Craig MacGillivray is in goal. In midfield, Ben Godfrey is still missing through injury whilst Abu Ogogo starts his four game suspension, so Bryn Morris and Jon Nolan line-up together in central midfield. It means that there’s a change of formation to a 4-4-2 with Stefan Payne coming into the side alongside Carlton Morris upfront.

It was the away side who seemed to settle quicker and they were able to get their passing game going in the opening minutes. A neat move on the left hand side between the likes of Jon Meades, Harry Forrester and Andy Barcham saw the latter win a corner, but thankfully for Town the delivery was easily dealt with.

Town’s first real opportunity of the afternoon came just before the 15 minute mark. Some good hold-up work from Carlton Morris saw him release Alex Rodman on the left. Rodman tried to cross but it was blocked by the hand of Barry Fuller meaning that Town had a free-kick in a decent position on the left. Shaun Whalley whipped in a low delivery, which was met by Omar Beckles but he couldn’t direct the volley on target.

On the whole the game was being played at quite a sedate pace with neither side creating anything clear cut. In Jon Meades, Wimbledon had a man who was capable of taking a long throw and he almost used this to good effect midway through the first-half when his throw was only headed away as far as Andy Barcham on the edge of the box, but Barcham’s first time shot didn’t have any power and was easily collected by Craig MacGillivray.

A few minutes later we saw the best move of the game so far when Wimbledon built-up nicely down the left. Liam Trotter was at the heart of it as he played a neat one-two with Lyle Taylor before unleashing a half-volley that was well saved by the feet of Craig MacGillivray.

Town’s best chance of the first-half came when Alex Rodman unleashed a powerful strike from 25 yards, which was palmed away by George Long, but it fell to Stefan Payne on the follow up and Town’s top scorer shot wide of an open goal as he appeared to be pushed off the ball.

Just a couple of minutes before half-time there was real concern for Jon Nolan as he went down under pressure from Lyle Taylor. Nolan was down for at least a minute but thankfully he got back to his feet was able to carry on.

The first-half had been a drab affair but their appeared to be a hint more urgency at the start of the second. Carlton Morris was almost presented with a chance when Stefan Payne flicked on Luke Hendrie’s cross, but although Morris beat Dons ‘keeper George Long to the ball, the away side had plenty of men back and were able to get a block in.

Within the opening six minutes of the second-period Town had created as many decent opportunities as they had in the first. Once again it fell to Carlton Morris as Alex Rodman put in a decent cross, which was met by an unmarked Morris but his header from eight yards went well wide.

Stefan Payne then had a free header of his own after a good ball in from Luke Hendrie on the right, but although Payne could hit the target, his effort lacked power and was easily held by Long.

Town looked a completely different side at the start of the second-half and nine minutes in they took the lead. Luke Hendrie once again put in a decent ball into the box, which was nodded down by Carlton Morris and Stefan Payne was on-hand to turn the ball home with his left-foot from eight yards for his 13th of the season.

In the minutes that followed the opening goal Town were shown two yellow cards, both for breaking up potential Wimbledon counter attacks. The first was shown to Bryn Morris with the second received by Omar Beckles.

Both sides struggled to create many chances in the 15 minutes that followed the goal but Town then had a five minute spell where they caused all sorts of problems down the left hand side. Wimbledon’s Captain and Right-Back, Barry Fuller, was clearly struggling injury and Alex Rodman got through on three separate occasions, but they couldn’t make the most of it with the final ball.

Town then had a couple of good opportunities. The first fell to Bryn Morris who did well to dispossess George Francomb on the left, but this shot from a tight angle was pushed away by Long. Stefan Payne then had a chance to double his tally for the day after being slipped in by Omar Beckles, but Deji Oshilaja did well to get across and make an important block.

With just under 15 minutes to go Paul Hurst turned to his bench for the first-time of the afternoon. Nathan Thomas was the man to come on as he replaced Shaun Whalley on the right-hand-side.

Town looked relatively comfortable for their one goal lead, but Craig MacGillivray had to remain alert and he did just that when Lyle Taylor tried to turn Egli Kaja’s cross towards goal, but MacGillivray did well to hold it low to his left.

Town’s life was made harder five minutes from Town as they were reduced to 10-men. It appeared to be an innocuous challenge from Bryn Morris as he looked to break up a Wimbledon counter attack, but he had already received an earlier yellow for a similar incident and this time Darren Drysdale produced a second booking and a red card.

With Town now down to 10-men, Stefan Payne was sacrificed for Max Lowe as Paul Hurst looked to sure things up at the back.

As the game ticked into stoppage time the visitors were provided with a great opportunity to level when Toto Nsiala committed a foul right on the edge of the box. Lyle Taylor stood up to take the free-kick but he fired well over the bar.

Lenell John-Lewis was then brought on with the aim of running the clock down and Town managed to do just that to take home all three points.

The first offer allows Season Ticket holders to bring a friend for a fiver. The second offer will allow those who work for the Emergency Services (Police, Fire, Ambulance and NHS) to receive 50% off the ticket price on production of photographic ID.

The club have a number of important home games coming up over the next six weeks and CEO Brian Caldwell felt it was important to reward the fans for their loyal support.

“Our Season Ticket holders are very important to us and are probably our best sales people, we hope they can encourage their friends, relatives and neighbours to come along for just £5 to see the improvements in the team”, said Brian.

“We have already had a really good uptake in renewals of Season Tickets for next season and our hope is that they bring a friend to the game against Oxford and hopefully they enjoy the experience and want to come on a more regular basis as well.

“Over the last few years we have had a great relationship with our armed forces and we are now looking to build-up relationships with our local emergency services.

“The Emergency Services do a lot of hard work across the county and we felt it was important to reward them with a ticket offer.

“We will be offering them 50% off for this game and we will be looking closely at what we can offer them in the future.”

Season tickets holders can easily change their seats to sit next to the friend they bring, just pop to the ticket offfice and they will do this for you.

If you are a member of the Emergency Services and have already purchased tickets please contact the ticket office. 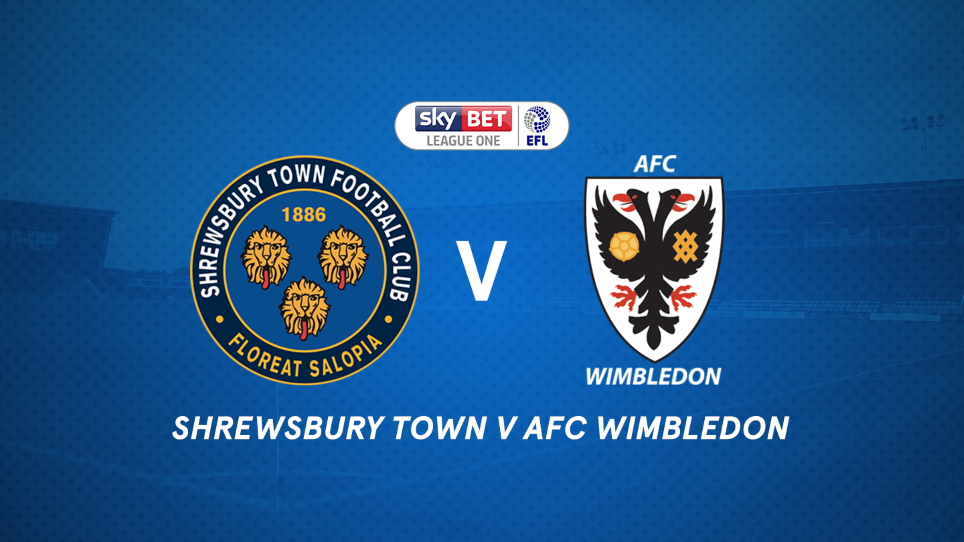