Tonight sees Shrewsbury Town go into possibly the most important pair of games of  in the clubs history. Our opponents finished the season with 71 points and although they ended the regular season with a defeat, their last ten games have seen a mini revival, seemingly inspired by new manager Lee Bowyer. The ex-Leeds United midfielder has won six and lost three since taking over in March. One of those wins was against us a few short weeks ago and other notable scalps include Blackburn and Rotherham at home but the Latics lost their high pressure game at home to Scunthorpe so their revival hasn't been completely immaculate.

The most frequent score at the Valley this season has been a 1-0 home win which has occurred five times. The next most common result is a 1-1 home draw which has happened three times.

Charlton are the 10th best team at home in League One with 39 points from 23 games.

Squad News
Charlton are hoping winger Tarique Fosu-Henry will be fit after a strained hamstring. Defender Lewis Page is unlikely to be fit in time.
Paul Hurst has a full squad to pick from with the exception of Abu Ogogo and Junior Brown.

Summary
Looking at social media, it's clear that Charlton are very much up for a noisy encounter with plenty of home support after their flurry into the play-off places. But we have the second best defence in the league so we're more than capable of getting something positive from this game. An away win would be just what we want but Charlton will have other ideas and will put us under pressure from the off.

Team News: Paul Hurst goes back to the 4141 formation, which has proven to be successful over the season for Town. Alex Rodman is re-introduced into the starting 11 ahead of Abo Eisa and Bryn Morris is back in the centre of midfield, he replaces Joe Riley. Carlton Morris gets the nod ahead of Stefan Payne up top.

Paul Hurst’s men came away 1-0 winners at The Valley, taking a lead into the second leg of the Sky Bet League One semi final Play-Off.

A late second half volley from Jon Nolan gave Town the win and the one goal advantage heading into the second leg.

Town started the game brightly but were nearly caught out early on from a Jake Foster-Caskey shot. The Addicks man shot the ball towards the bottom right hand corner but Dean Henderson got down well to put the ball out for a corner. Subsequently Town cleared the ball and the score remained level.

The next 10 minutes flew by. Both teams were battling hard for the ball in the middle of the park but neither team could breach the defence and cause a problem for the goalkeepers.

Town’s first real chance came in the 18th minute. Town broke on the counter attack through Bryn Morris and were pouring forward towards the Charlton

defence. Morris fed a ball through to Jon Nolan, who had a lot of work to do before reaching the back line. The centre midfielder dribbled his way into the box and let off a shot, which narrowly missed the target.

Nolan and Shaun Whalley were combining well down the right side as the half went on. Whalley fired in a high looping cross towards Rodman but The Addicks keeper, Ben Amos came out and claimed the ball well averting any danger for Charlton.

Bryn Morris came close for Town with 15 minutes of the half left to go. Some bright play down the wing opened up space for Morris on the edge of the box, the midfielder struck a hard shot towards Amos but the keeper parried the ball out for a corner, which The Addicks cleared.

Carlton Morris was given a yellow card towards the latter stages of the half for a challenge on Charlton captain Jason Pearce.

An end-to-end first half came to an end with both teams level. Town created a flurry chances but couldn’t do enough to get the ball past The Addicks keeper.

The first 10 minutes of the half went by just as the first half finished. Both teams were fighting hard in the middle of the pitch trying to keep the ball. Neither team could hold the ball long enough to create a dangerous attack.

Town had a shot on target five minutes later. A deep free kick was delivered in and was latched onto by Rodman but the winger’s header didn’t produce enough power to trouble Rodman.

A set piece chance fell for Town in the 67th minute. Whalley passed the ball to Nolan who was driving into the box. The midfielder got on the end of the ball but shot the ball just wide.

Rodman was given a yellow card for a raised boot on Patrick Bauer.

Charlton had their own chance with 15 minutes left in the half. Ben Reeves flashed a half volley just over the bar from outside of the box.

The deadlock was finally broke by Town in the 81st minute. Some great passing play around the box from Whalley and Stefan Payne created an opening for Nolan who fired an emphatic volley into the top corner of the goal giving Amos no chance.

Dean Henderson made an important save in injury time. Claiming the ball from an Addicks header.

Charlton had a couple of late corners but Town held on and took a one nil lead back to the Montgomery Waters Meadow for the second leg of the semi final.

Charlton game live on the big screen in the Sovereign Lounge

Shrewsbury Town travel to the Valley on Thursday night to take on Charlton Athletic in the Sky Bet League One play-off semi final first leg.

With the game being played midweek in the evening some Town fans will find it hard to get down to the Valley to support the team.

The club will be opening up the Sovereign Lounge at the Montgomery Waters Meadow to show the game live on our big screen.

It’s free entry and free parking, the bar will be open and the kitchen will be putting on pulled pork baps.

Why not come down to the Meadow and cheer of the lads with your fellow Town fans.

The doors open at 6pm this evening if you want to pop down for a leisurely and some food before the action starts. 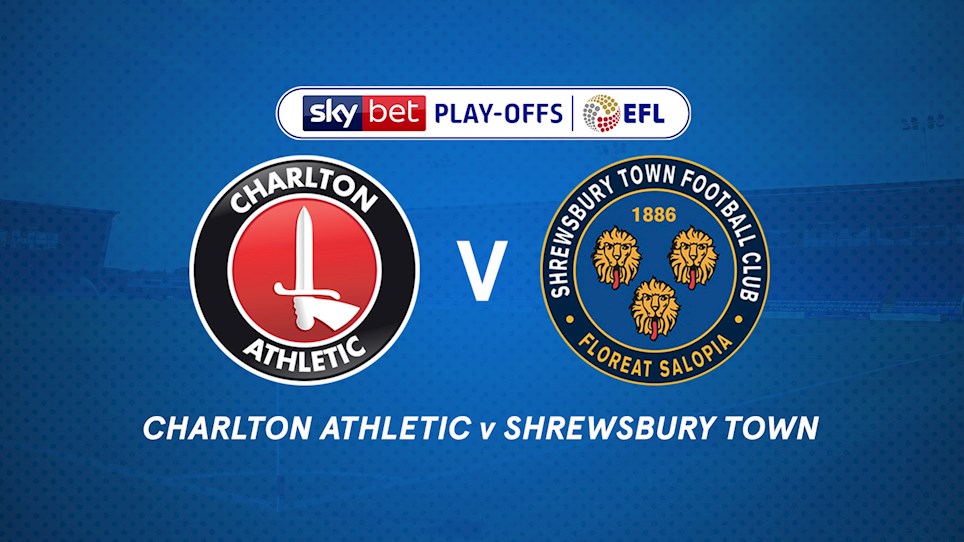