The Emirates FA Cup is here again with Aldershot visiting this weekend, which gives proceedings a distinctly retro feel for those of us who remember the late 1970's. For those of you who don't remember that far back, one of our most historic years, 1979, included an Emirates FA Cup tie with Aldershot, albeit at a slightly later stage of the competition. I don’t remember the game, I was small and only just aware of Shrewsbury Town after they beat top flight Manchester City, I didn't make it to the Gay Meadow until the following season.

They say form goes out of the window in the cup but without it I wouldn't have much of a preview so I'll plough on. This season has seen Aldershot position themselves well, just behind the play-off spots with plenty of time to make a good attempt at promotion. They're the highest scoring team in the National League with 29 goals from their 18 games. Their away form is pretty even with three wins, three draws and three defeats with their most recent away win taking place against Gateshead in mid September.

Aldershot's 29 goals this season have come from 13 different squad members which suggests that we're going to need to keep a close eye on everyone. Shamir Fenelon and Matt McClure are joint top goalscorers with four goals each. Fenelon is a 23-year-old forward who's scored goals for Crawley, Torquay and Tranmere whilst on loan from his first club Brighton. McClure has been with the Shots since the summer of 2015. The ex-Wycombe trainee has also spent time with Dagenham and Hays and Yeading.

A third of Aldershot's games this season have been clean sheets with their last clean sheet occurring on October 14th when they beat Torquay at home in the fourth qualifying round of this competition.

No new injury concerns for either side.

I do love the Emirates FA Cup as it's brought us some good times in the past but at this level of the competition and after our season so far, we are one of the teams to beat and not the minnow that we have been in the past. This could mean a nervy afternoon for Shrewsbury fans as Gary Waddock's young team try and put themselves in the EFL shop window. However, if we play as well as we have done this season, Aldershot will find it difficult and we should progress to the next round. Much will depend upon which team takes the initiative on the day, if we can get hold of the ball we all know what we can do but Aldershot will be looking to aggravate and generally upset our game from the off and we need to be well prepared for that.

Shrewsbury Town swept into the second round of the FA Cup thanks to a 5-0 victory over Aldershot Town. The visitors started brightly, but two goals in four first-half minutes from Alex Rodman and a Shaun Whalley penalty calmed the nerves. Town then scored three times in six second-half minutes with Stefan Payne, Arthur Gnahoua and Carlton Morris all getting themselves on the scoresheet as Town’s higher league quality paid off in the end.

Team News:
Town make four changes to the side which suffered their first league defeat of the season last weekend against Peterborough United. Abu Ogogo is suspended after picking up five yellow cards, so Bryn Morris takes his place in the centre of midfield. Dean Henderson is the only one of the loanees not given permission to play in the FA Cup by their respective clubs, so Craig MacGillivray is in goal. Mat Sadler returns after missing last weekend with illness, he replaces James Bolton with Joe Riley moving to right-back and Omar Beckles taking the left-back spot. The final change is up-top where Carlton Morris is replaced by top-scorer Stefan Payne.

First Half:
Aldershot Goalkeeper Mark Smith was the first man to be tested eight minutes into the game. Alex Rodman found space down the left-hand side and clipped a ball onto the head of Stefan Payne who glanced it goalwards, but Smith got down well to his right to palm it away and Aldershot scrambled it behind for a corner. The resulting corner led to Town having a short spell of pressure, but the ball wouldn’t quite fall for a blue and amber shirt and Smith eventually gathered.

Despite being two leagues below Town, Aldershot have a reputation for playing some decent football and at times in the opening 20 minutes they showed that. A nice passage of play from the visitors allowed Fabien Robert to find space, but his shot was comfortably saved by Craig MacGillivray.

With Aldershot starting to get a foothold in the game, Town were forced to play on the break and they created a brilliant chance to take the lead when Whalley and Nolan combined to put Stefan Payne in behind the Shots defence. Payne had plenty of time to settle himself and decided to try and take it around the Aldershot ‘keeper, but Smith was brave and smothered the ball at Payne’s feet, much to the disgruntlement of Alex Rodman who would have had an easy tap-in had Payne opted to square it.

However, Rodman didn’t have to wait long to get his name on the scoresheet as less than a minute after the Payne chance, Town took the lead. In the 20th minute, Riley found space on the right-hand side and delivered an inch perfect cross for Rodman to head home from a yard out at the back-post.

Rodman, playing against his former club, was then involved again as Town added a second four minutes later. Stefan Payne threaded a perfect through ball into the path of Rodman who tried to take the ball past Mark Smith, but the Aldershot ‘keeper caught his trailing leg and, after taking a couple of seconds to make his decision, Referee Ross Joyce pointed to the spot. Shaun Whalley stood up to take the penalty and fired it straight down the middle.

The second goal seemed to take a lot of sting out of the game, with Aldershot struggling to create any real chances in the remainder of the first-half. Scott Rendell went closest with his shot from 20 yards that went a couple of yards wide. At the other end, Town seemed to have taken the foot off the gas themselves although that wasn’t helped by the fact that Jon Nolan was struggling with an injury and he was replaced by Arthur Gnahoua a couple of minutes before the break.

Joe Riley then picked up a yellow card right on half-time when he brought down Shamir Fenelon as Aldershot looked to break after a Town corner.

Second Half:
Aldershot had struggled since Town took the lead in the first-half, but they had the first chance of the second half as left-back Adam McDonnell lifted the ball forward for Bernard Mensah who decided to shoot first time on the volley, but it was never troubling the Town goal.

Town then had a good chance to make it three when Toto Nsiala’s challenge fell into the path of Shaun Whalley who ran at the Aldershot defence before having his shot blocked behind. The resulting corner saw Nsiala win the initial header and it looked like Alex Rodman would hammer home from a yard out, but an Aldershot body got in the way and it looped over the bar.

Town did make it three 62 minutes in when Bryn Morris pounced on an Aldershot mistake in the middle of the park. Morris ran with the ball before releasing Whalley into space. Whalley could have opted to shoot himself, but with the Aldershot goalie bearing down on him, he decided to roll the ball across the box for Stefan Payne to sidefoot into the empty net from six yards.

The third goal took all hope Aldershot had of getting back into the game away and four minutes later Town would add a fourth. Alex Rodman, who had been back to his best against his former club, turned Cheye Alexander inside out and he cut the ball back for Arthur Gnahoua who ran onto the pass and powered his shot into the top of the net.

That was Rodman’s last involvement of the afternoon as he was replaced by Carlton Morris, but it didn’t stop Town’s goalscoring exploits as Morris came on and scored with just his second touch of the game. Whalley played the Norwich loanee into space behind the Aldershot back-four and he steadied himself before rifling a shot past the onrushing Smith to make it five-nil with over 20 minutes of the game still remaining.

Whalley and Morris then combined again with the latter finding himself in behind for the second time in the space of 10 minutes, but this time his radar was off and he shot a yard wide of the post.

At the other end, Aldershot stuck to their principles and tried play some decent football, but even when they got into some good positions, the likes of Sadler, Beckles and Nsiala were on hand to sweep up any danger as Town took the sting out of the game in the final 15 minutes.

Ticket details for the Emirates FA Cup game with Aldershot

Ticket details have been confirmed for Shrewsbury Town’s First Round Emirates FA Cup tie with Aldershot at the Montgomery Waters Meadow.
Town will take on The Shots on Saturday 4th November with a 3pm kick-off.
Last season when we took on Barnet at the same stage of the competition and announced special prices and a discounted rate for season ticket holders.  We have been in discussions with Aldershot and they have kindly agreed to the same prices and structure as last season.
There will be a special discount for season ticket holders who buy up to 24 hours in advance with their seats being reserved until Friday 3rd November

Full ticket details are as follows

This game is not included in the Season Ticket and holders will need to purchase a ticket for the game.  Their existing season ticket seat will be held until Friday 3rd November.

Season Ticket holders will have the game added to their season ticket and they will use this to access the game, no physical tickets will be provided.

FanCard holders can purchase the game at full price and select the option to have the game added to their FanCard.

The Youth Group offer is not valid for Emirates FA Cup games. 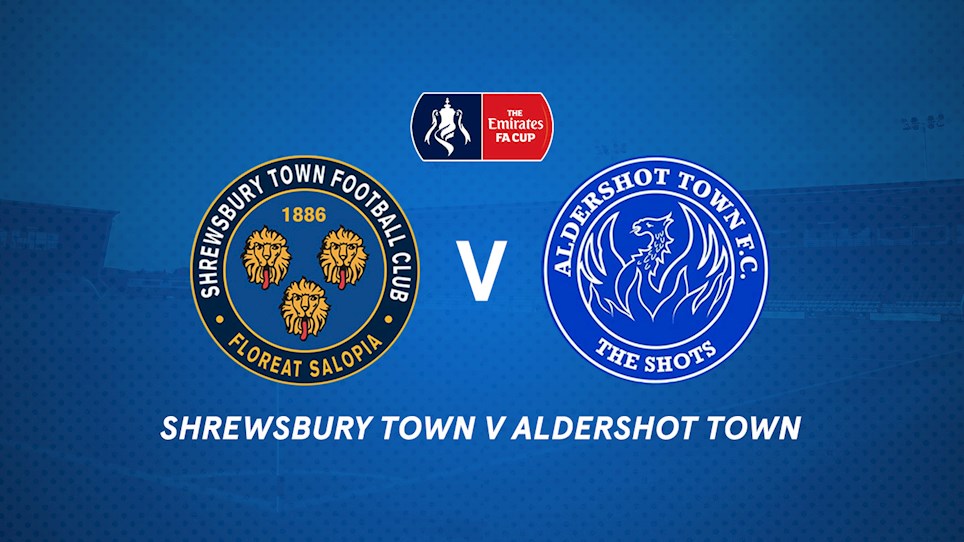 
Clarification on tickets for season ticket and fancard holders