This Good Friday sees Shrewsbury Town travel to Barnsley after a difficult week off the field for the Tykes. Fortunately I only have to focus on what happens on the other side of the touchline and in that respect the Yorkshire team have been very good all season. With just a handful of games left, 2nd placed Barnsley are looking to cap off the season with promotion to the Championship but Charlton, Portsmouth and Sunderland all within three points. Pompey and the Black Cats also have a game in hand so the Tykes will be looking to earn maximum points over the Easter weekend just to stay in second place.

Ten at home and ten away.

The Tykes have yet to concede in the first half of a League One home game this season. They've coupled that defensive solidity with some very quick starts, scoring eight in the first fifteen minutes and seven in the next fifteen.

Barnsley are one of two teams in Skybet League One who have yet to lose at home, only top placed Luton have a better record.

With the exception of long-term injury victims Kenny Dougall and Kieffer Moore, Barnsley manager Daniel Stendel has a full squad to choose from.

Dave Edwards is out after ankle surgery; Steve Arnold remains sidelined with a hamstring injury.

With our away form picking up we face one of the best home teams in the division, which is going to provide a stern test in all areas of the pitch. We need to be alert from the first second, as the stats suggest that the Tykes don't hang about when it comes to taking the lead. Ten clean sheets at home suggest we'll be doing well to score, let alone winning but all things are possible. Earlier this season we beat Barnsley at home when we were in much worse form and expected to lose so why shouldn't we be the first team to beat Barnsley at home?

Shrewsbury Town were unable to secure any points on the road against promotion chasing Barnsley.

Despite Tyrese Campbell notching a goal for Town, the Shrews were unable to keep out the Tykes and left Oakwell Stadium with no points.

Shaun Whalley could have got his team off to a flying start just three minutes into the game. The forward found himself in a one-on-one situation with the Barnsley keeper but was unable to find the net due to pressure from the oncoming Tykes defenders.

The opening 15 minutes saw Town play good passing football in the opposition half. Whalley and Tyrese Campbekk were both working hard to create opportunities and caused the home side some problems.

The home side had to wait until after the 20-minute mark to register a real threatening chance. Jordan Williams was managed to pick the ball up near Town’s box but the driven shot flashed wide of the post.

Alex Mowatt managed to go one better just two minutes later and managed to fire the home side in front. The midfielder received the ball on the edge of the box and curled a wonderful effort into the goal just past Jonathan Mitchell.

Town’s response came in the 37th minute through Campbell. The forward managed to get on the end of a bouncing ball to connect with half-volley outside of the box and saw the ball fire into the corner of the net via the post – giving Adam Davies no chance.

Town came very close again on the stroke of half time. Town were dealt a slice of luck when Whalley’s block saw the midfielder have an opportunity to run at goal. The winger played through Campbell but the forward’s shot was well saved.

The half came to an end with both teams managing to register a goal. A competitive 45 minutes saw both teams have chances, which encouraged another tightly contested half.

Town’s second-half started almost identical to the first, with Town nearly grabbing an early goal. Luke Waterfall managed to get on the end of Greg Docherty’s floated ball but narrowly missed the target with his diving header.

A high number of chances were coming Town’s way in the opening stages of the half and Campebll came very close to adding a second goal to the tally. The striker hit a shot inside the box on the half-volley but couldn’t find the target.

The home side had their own chance shortly after and were inches away from getting another goal. Cameron McGeehan rattled the crossbar with a first-time effort.

Whalley was given a yellow card by referee Scott Oldham for standing over ball as the home side went to take a free-kick.

Jacob Brown managed to get the breakthrough and gave his team the lad in the 55th minute. The Tykes man found himself inside the box and he managed to squeeze the ball into the net past Town’s number one with a powerful effort.

The home side were begging to get the majority of the chances as the half progressed. Barnsley were the team in the ascendancy but Town looked dangerous on the break.

Scott Golbourne nearly made his teams’ persistence pay off with a curling effort. The defender let off a shot from outside the box but was denied by a good save from Davies.

Waterfall was given a yellow card in the latter stages of the game for dragging back a Tykes forward.

The game came to an end with the home side clinching all three points.

Tickets are now on sale for our Sky Bet League One trip to Oakwell Stadium.

We have been allocated 500 for the game with Town fans being housed in the North Stand.

Tickets go off sale at 3pm on Thursday 18th April. 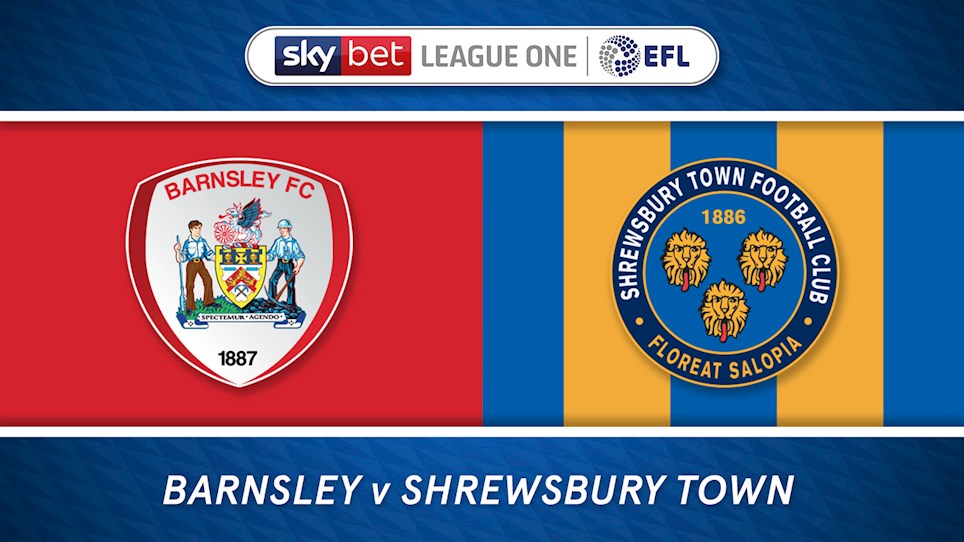