This weekend Town play Coventry City at the Ricoh Arena in what could be Coventry's last game there. Differences between the club and the Stadium owners mean that City may have to find a new home for next season making this quite a high profile game. On the pitch the Sky Blues have had a reasonable season, at times they've lacked consistency and had a rough patch from November until the end of December but aside from that, results have been good enough to put them in 8th position with two games to play. Mathematically they could still make it to the play offs but they would have to win their last two games and hope that neither of the two teams above them (Doncaster and Peterborough United) win any of their remaining games.

City's form had been quite good with five wins and two draws in their last ten games, their most recent encounter was a defeat was a 2-1 away defeat against high flying Portsmouth and their last home defeat was against Oxford on March 23rd.

Clean Sheets
Seven at home and four away.

Midfielder Tom Bayliss will be out for the rest of the season with a broken wrist. Midfielder David Meyler is out with a dislocated shoulder.

Dave Edwards and Steve Arnold are both on the sidelines for Town.

One of the good things about being so close to the end of the season is that you generally know what you need to do before the game. We need to win this to guarantee our League One status after we let the three points slip away against Oxford. Our away performances have been pretty good recently and we've already beaten Coventry at home this season so it is of course perfectly possible for us to take the three points.

The A5 from Dobbie’s Island to Jct 3 (Cosford) M54 will be closed to all traffic from about 10.50am through to about 12.30pm to allow the Bike4Life charity ride to pass safely. So if you're travelling to Coventry you may want to factor this information in.

Shrewsbury Town had to battle back from a goal down to earn a point against Coventry City.

Fejiri Okenabirhie was the man for Town who got on the score sheet to help his side take a point. A  point which secured Town’s Sky Bet League One status.

The first 15 minutes saw the home side marching forward and looking to break Town down and play the ball into the box. Town were looking dangerous on the counter-attack through Tyrese Campbell and Greg Docherty but couldn’t calve out a clear chance.

The Sky Blues managed to take the lead shortly after the 15-minute mark through Jordan Shipley. Town would have been disappointed as Jonathan Mitchell saved the strikers’ initial shot but couldn’t avert the forward from converting the rebound just outside the six-yard box.

Anthony Grant was given a yellow card in the 29th minute by referee Alan Young during a break of play.

Campbell stung the palms of the Sky Blues keeper Lee Burge in the 32nd minute with a strong shot. The striker got on the end of the pass from Docherty and let off his effort just inside the box. Unfortunately for Town the striker couldn’t guide the ball past the Coventry keeper.

Town would have thought they were in on goal shortly before the half-time break. Coventry miss placed a pass backwards towards Burge and Campbell was inches away from nicking the ball around the keeper and tapping into the net.

The half came to an end with the home side taking the one goal advantage into the break.

Town came out for the second-half looking to break down the Coventry defence but were struggling to find space in and around the box. Both Campbell and Docherty were trying to be positive with the ball but found opportunities hard to come by.

The game lacked any real goalmouth action as the clock ticked on towards the hour mark.  The battle for the ball was being played out in the middle of the park and neither team were able to sustain a period of possession.

Town came close in the 69th minute through left-back Scott Golbourne. The defender managed to latch onto a bouncing ball and was able to swing his leg and make a solid connection. Despite beating the keeper, the shot just beat the post.

The Sky Blues’ lead was nearly taken away in the 74th minute as Town came close again. James Bolton got on the end of a set-piece delivery but couldn’t guide his header on target.

Town finally got the breakthrough in the 78th minute. Shortly after coming on Fejiri Okenabirhie managed to stab home the ball into the back of the net after Luke Waterfall’s long-range shot drifted wide – bringing Town back onto level terms.

The game came to an end with Town securing a point. A point which secures Town’s Sky Bet League One status.

Tickets are now on sale for our Sky Bet League One trip to Ricoh Arena.

We have been allocated 1,000 tickets in the South Stand for the trip to Ricoh Arena which have sold-out.

Ticket prices increase by £3 if purchased on the day of the game.

Personal assistant is free of charge.

Supporters are advised that they may be held back after the final whistle for crowd control.

Town fans can pay on the day but prices increase, go to turnstile 5 and you can pay with CASH only.

Any tickets that have been put up for collection will be available from the main Ticket Office opposite the casino. 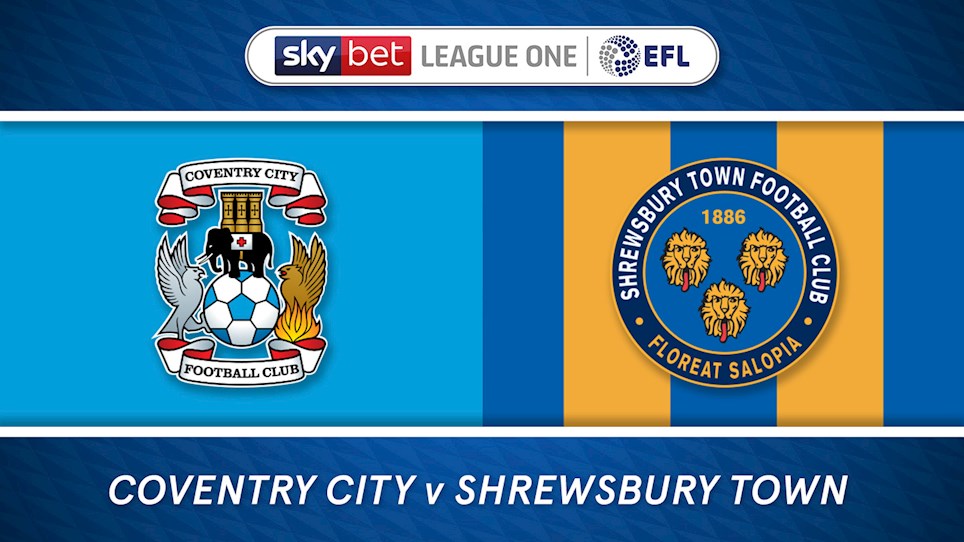