Marcus Braddock looks ahead to Saturday's trip to Gillingham

This weekend, Shrewsbury Town make the long journey down south to Kent to play Gillingham. The Gills sit in 13th,  are one position above Town with one point more than us but with an inferior goal difference. Both teams have yet to breach the all important 50 point mark which should mean Skybet League One survival this season. Both teams will be looking at this game as one to win so it should be an exciting game, a draw would push both teams closer to the magic 50 points and leave them both looking for another point or two before the season ends. The Gills home form hasn't been spectacular with just six wins and ten defeats from their 20 games at The Medway Priestfield stadium in League One. Their last six games have seen them win twice, lose twice and draw twice and their last home win was a 1-0 win to Oxford on the 9th of March.

Seven from away games and six at home.

The Gills best period of home games appears to be the last fifteen minutes with seven goals scored and just two conceded. Their worst period is the first fifteen minutes of the second half during which they've conceded eleven times.

Town have had a bit of a sickness bug in the squad with a few first team players under the weather. David Edwards and Steve Arnold will be unavailable because of injury.

With our away form improving I was hoping we may get a positive result but with players suffering from illness, we may find it difficult going. Sam Rickets has said that any spaces left would make a good opportunity for fringe players to push themselves and finish the season on a high. Whoever plays it's going to be a hard afternoon against a team in a similar position to ours, a win for either team should allay any relegation fears for the rest of the season.

Town secure a 0-2 away win against Gillingham.

Town’s trip to the Gills’ Priestfield Stadium came to an end with the Shrews securing three points.

James Bolton and Tyrese Campbell were the pair on hand to secure Town the win with a goal each.

Town’s afternoon in Kent got under way to a fiery and fast paced opening 10 minutes. Both sides hit the post in what was a very competitive opening period. Shaun Whalley was the man for Town who hit the post with his free-kick effort.

Town were the team getting the main bulk of the chances and were looking a threat in the Gills box. Tyrese Campbell came close to converting from Whalley’s pass. The strikers’ effort snuck under the keeper but couldn’t beat the post.

Town’s industrious midfield were constantly trying to force the play and progress into the final third. Whalley and Ollie Norburn were the two standout players looking to create chances and drive the ball forward.

As the half progressed, neither team created clear-cut chances. The Gills were pumping long balls forward, but the Town back five were doing a good job in heading the ball away from danger.

The half came to an end with neither team notching a goal. Town would have been pleased after a positive half and would have gained confidence going into the second-half.

Town started the second-half in near perfect fashion, with Omar Beckles nearly putting Town in the lead. The defender got on the end of a cross but was unable to bundle the ball into the back of the net due to a Tomas Holy save.

Town did take the lead just a minute later in the 49th minute through James Bolton. The defender latched onto the end of Whalley’s cross and managed to guide the ball into the corner of the net through a number of Gills bodies.

Town were the team in control but had to be switched on at all times with the home side looking to get back into the game. Beckles was nearly caught out by Brandon Hanlan in the Town box but the Shrews man managed to recover well and clear the ball.

To the delight of the travelling Shrews fans, Town doubled the lead with 62minutes on the clock. Scott Golbourne fired in a cross towards Town’s number 11, and the striker eloquently slotted the ball home first time past the Gills keeper Tomas Holy.

Greg Docherty was given a yellow card in the 66th minute by referee Thomas Bramall for a foul on Elliot List.

Town were the team in the ascendancy and were frustrating the home side as the half progressed into the final 10 minutes. The Gills were finding it hard to break down Town’s back line and couldn’t create clear chances.

Mark Byrne was given a yellow card in the latter stages of the game for a foul on Norburn.

The game came to an end with Town securing all three points at the Gills’ Priestfield Stadium.

Tickets are now on sale for our Sky Bet League One trip to Priestfield Stadium.

We have been allocated 321 in the Brian Moore Stand lower tier.

Town fans can get tickets for the Brian Moore Stand on the day of the game but the prices increase by £2.

Disabled fans pay the relevant price class and are entitled to a carer free of charge, as long as they are in receipt of the higher rate of DLA or Enhanced level of PIP.

Tickets go off sale at 3pm on Friday 12th April, after that it is pay on the day at Priestfield Stadium. 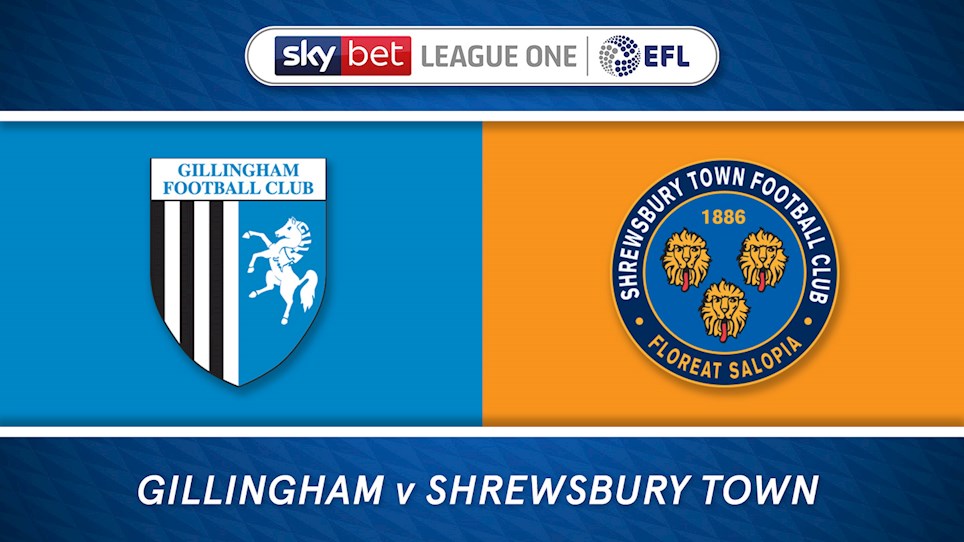