As the week draws to a close it's time to turn our attention toward our sporting life and in particular Shrewsbury Town who entertain Blackpool this weekend. Following last seasons 12th place in League One, the Tangerines have made a slow start to the new season. A draw at Wycombe on the seasons opening day, a defeat at home to Portsmouth a week later but earlier in the week they did manage a League cup win at home to table topping Barnsley.
The closed season has seen a fair few changes in the Blackpool squad with incoming ex-Salford defender Michael Nottingham and ex-Maidstone midfielder Harry Pritchard  both scoring since signing. Defender Chris Taylor and goalkeeper Mark Howard, both arrived in the summer from Bolton and both have slotted right into the starting line up.

Stats
There still haven't been enough games to draw any reliable conclusions from  but there are in game stats. Looking at the Wycombe game at the start of the season, the stats are pretty even apart from the corners conceded with Wycombe winning eight to Blackpool's two. The interesting stat from their Tuesday cup game is that they had less possession (44%) and still won 3-1. In their home defeat to Portsmouth the Tangerines had more shots on and off target, more corners by 4 to 1, committed far fewer fouls but had less possession and lost 2-1.

Squad News
Town could be without James Bolton, Ollie Norburn and Aaron Amadi-Holloway after knocks against Burton and Charlton.
The Seasiders will be without Jimmy Ryan (knee) and Ryan McLaughlin (hamstring).

Summary
Blackpool are still searching for a replacement manager for Gary Bowyer who moved on recently but caretaker Terry McPhillips is in charge and got his first win on Tuesday after making a raft of changes. Injury forced changes are needed for John Askey so although I could guess who will come in as replacements, they're all still finding their feet so its difficult to predict a result.  We look quite exciting going forward which always gives you  hope and defensively we need to tighten up on the lapses in concentration but I think that will improve as players get used to each other. I'm certain we have enough to get something this weekend and I'm looking forward to a noisy Montgomery Waters Meadow. So far the support from the safe standing area has been incredible and it would be nice to pack out that end of the stadium completely to increase the atmosphere further.

Shrewsbury Town secure their first point of the season with a draw against Blackpool.

Shrewsbury Town secured their first point of the season against visiting Blackpool.

Early on in the tie, Blackpool’s Chris Taylor was given a yellow card for a late challenge on Greg Docherty, as Town were advancing up the pitch.

The first 15 minutes of the game lacked any real goalmouth action. Both teams were still feeling out the opposition, but neither side could create any danger.

Just four minutes later, Town had a golden opportunity to take the lead through Lennel John-Lewis. Some good midfield passing found Shaun Whalley in a perfect crossing position; he fired the ball low and hard across the area but John-Lewis couldn’t make a solid contact with the ball.

The game was starting to open up for Askey’s men as time went on. A good attacking flurry for Town saw Docherty on the edge of the box with half a yard of space. The midfielder let off a powerful shot but the Seasiders did well to get a player in the way.

Josh Laurent was the next Town player who went close to breaking the deadlock for the Shrews. Laurent found himself in space on the edge of the box and the midfielder let off a low shot, which looked destined for the corner. To Mark Howard’s relief, the ball zipped just past the post.

Brilliant link up play from Town’s attacking players was proving to be a big problem for the Seasiders defence. Great one touch passing once again opened up space in the box just five minutes before the end of the half. Whalley and John-Lewis combined well but the striker couldn’t get a shot on goal, due to the oncoming defender.

Just before the break Town had a free-kick on the edge of the box, which came inches away from giving Town the lead before half-time.  John-Lewis did well to latch onto the delivery but the powerful header was cleared off the line.

Town came out for the second half with the same intent as the first. Similar to previous fixtures, Town’s wing play and passing was proving to be a problem for the Tangerines.

Ryan Haynes and Gilliead were giving Blackpool’s right back, Donervon Daniels a tough time on the left side. Smart movement from Town’s left back saw him in a great crossing position; Haynes floated a great ball into the box but the ball didn’t fall on a Town head and the ball was cleared well.

Town managed to put the ball over the line in the 71st minute, but referee Ollie Yates disallowed the goal as he deemed John-Lewis to have handled the ball.

The game was becoming a tighter affair as the clock ran down.  Blackpool were throwing everything at Town’s back line but the defensive resolve remained strong.

Town came ever so close to getting the deserved goal in the 90th minute, through Laurent. Amadi-Holloway did well to hold up the play and slipped Laurent through on goal. The centre midfielder let off a powerful shot but Howard made a brilliant save to keep his side in the tie.

The game ended with the scores level at the final whistle, with neither team able to take the lead.

Tickets are now on sale for our home game with Blackpool.

Supporters are encourage to buy in advance if they can to help beat the queues on matchday. 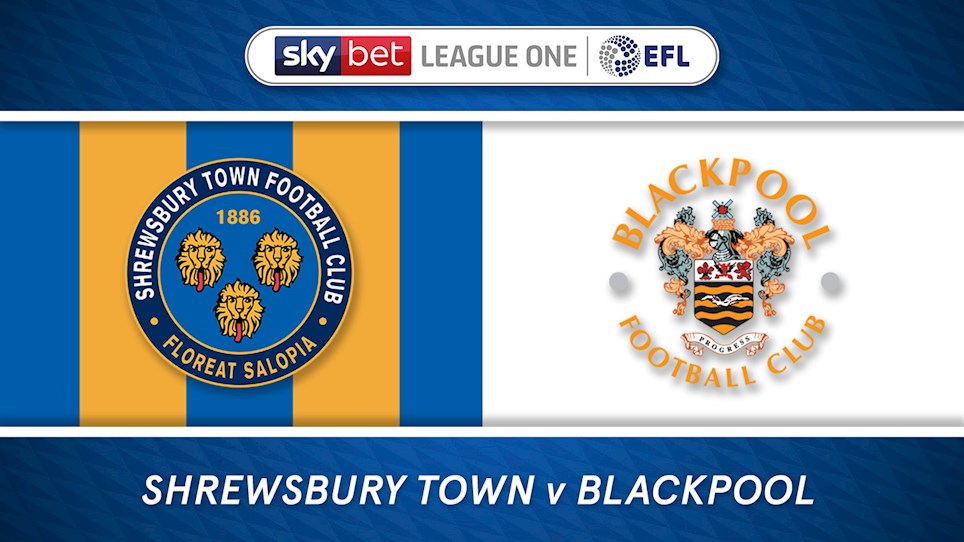