Town get start the season with an unlucky defeat

Town’s first game in the Sky Bet League One campaign got underway and Askey’s men fell to a one nil defeat at the hands of Bradford City.

The Bantams took the lead in the first half through Jack Payne and saw the game out to take all three points back to Bradford.

John Askey names his starting line up for this afternoons clash against Bradford City with six debutants getting the nod. Laurent, Kennedy, Coleman, Loft, Colkett and Holloway all start for the Shrews. Amongst the bench is young Ryan Barnett who has impressed the Gaffer during pre-season.

The first 10 minutes of Town’s Sky Bet League One season got underway to a fiery start with both teams pushing forward and challenging each other’s defence. Some bright play in the midfield from Town ensured Askey’s men looked a constant threat but both defences were remaining strong.

Despite Town looking the more dangerous side, Bradford were the team who broke the deadlock through Jack Payne. The attacking midfielder latched onto a pass from George Miller inside the box. The number 10 slotted home into the bottom right corner to give the Bantams the lead.

Town were nearly in for the equaliser just after the half an hour mark. Smart one touch play from Aaron Amadi-Holloway and Stefan Payne found Shaun Whalley in the box. The winger would have been clear in on goal if it wasn’t for a last ditch tackle from the Bantams defender.

The subsequent corner once again came close for Town. Kieran Kennedy latched onto Whalley’s delivery and was denied a debut goal by a great save from Richard O’Donnell.

Whalley was looking evermore dangerous as the half was drawing to a close. Shaun found himself on the edge of the box and let off a great curling effort that beat the keeper but couldn’t beat the post as the ball narrowly went the wrong side of the woodwork.

Shaun was proving to be a big problem for Adam Chicksen down the right side. The winger relentlessly attacked the wing and was delivering good balls into the box but Town struggled to capitalise and could get a man on the end of the deliveries.

Askey’s men went into the half time break down on the score sheet by one goal. Despite going a goal down, Town were looking strong in the midfield and created chances but couldn’t quite find the back of the net.

Town started the second half similar to how they finished the first. Town were looking dangerous on the wings. James Bolton crossed in a great ball towards Omar Becklles just seven minutes into the half. The defender made good contact with the ball but the Bantams defender leaped into the air to block the shot, which looked destined for the back of the net.

Josh Laurent was the next Town play who came close to grabbing an equaliser for the Shrews. The ball was being bundled around the box and the centre midfielder managed to get a nick on the ball but his effort rebounded off the bar.

The Bantams were inches away from doubling their lead in the 69th minute. Sean Scannell tricked his way into the box and fired the ball into the crowded area. Bradford managed to get a shot on goal but Coleman pushed the ball onto the post.

Town were on the back foot for a short period and City had another chance to double the lead. Eoin Doyle was clear through on goal and passed the ball to George Miller who couldn’t find the target from four yards out.

Town were battling hard for the ball and continued to attack the Bantams back four at any opportunity. Alex Gilliead was centre meters away from getting the deserved equaliser for Town in the 80th minute. The substitute drove the ball

into space and let off a shot from 20 yards but the ball didn’t dip enough and crashed off the bar.

Despite looking good going forward Town fell to a one nil defeat at the hands of Jack Payne’s first half goal. Josh Laurent and Alex Gilliead came close for Town but couldn’t get their hands on an equaliser.

Tickets are now on sale for our home game with Bradford City. 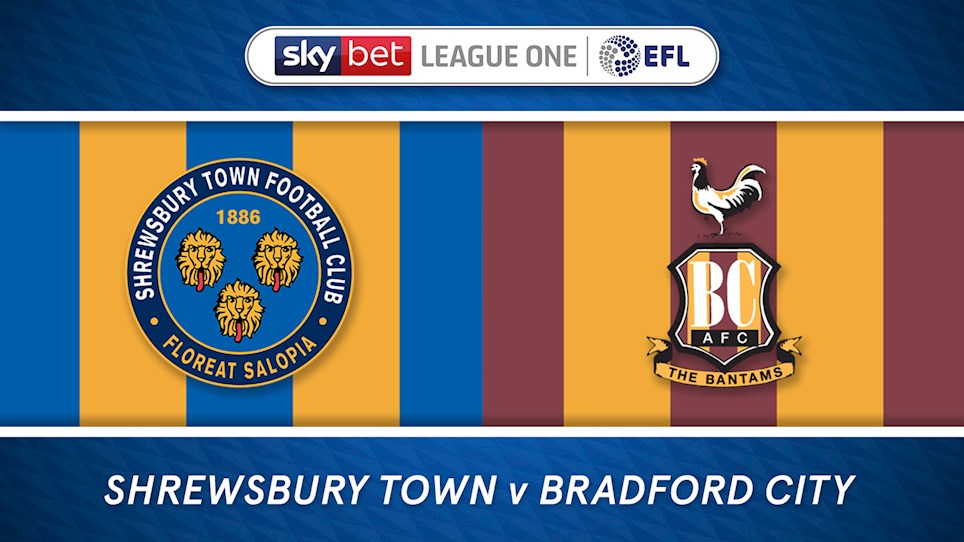