Tonight, Burton Albion visit Montgomery Waters Meadow for the first round of the Carabao Cup. Like us, they've not managed a point in their first two games so this game could prove an opportunity for either team to kick start their season. Burton were relegated from the Championship last season after 2 years in the second tier, an impressive feat given their size in comparison with the average club in that division.

So far this season there haven't been enough games to pick out any patterns emerging although both of Burton's goals were scored in the middle fifteen minutes of two different halves of their two games. Stats from their two games so far show a 50% share of possession and as you might expect, they had considerably more shots on and off target at home.

Town have a full squad to pick from.

On current form, either team could win this one but hopefully home advantage will give us the edge. In his pre-match comments, John Filan indicated that there might be a change or two to keep everyone fresh within the squad. According to the Derbyshire press, Burton boss Nigel Clough will be looking to go through to the second round and is hoping for a home draw in the next round! He may well have room for optimism given his teams record in the last couple of seasons in the Carabao Cup. The Brewers beat Oldham and Cardiff away last season, lining up a lucrative away game at Old Trafford although the Red Devils easily won 4-1. In the previous season, a 3-2 win at home to Bury set up a home tie against Liverpool which the Brewers lost 5-0. I expect this to be a difficult one, hopefully it will be an open game but I have a feeling that the team that can grind out the result will prevail. 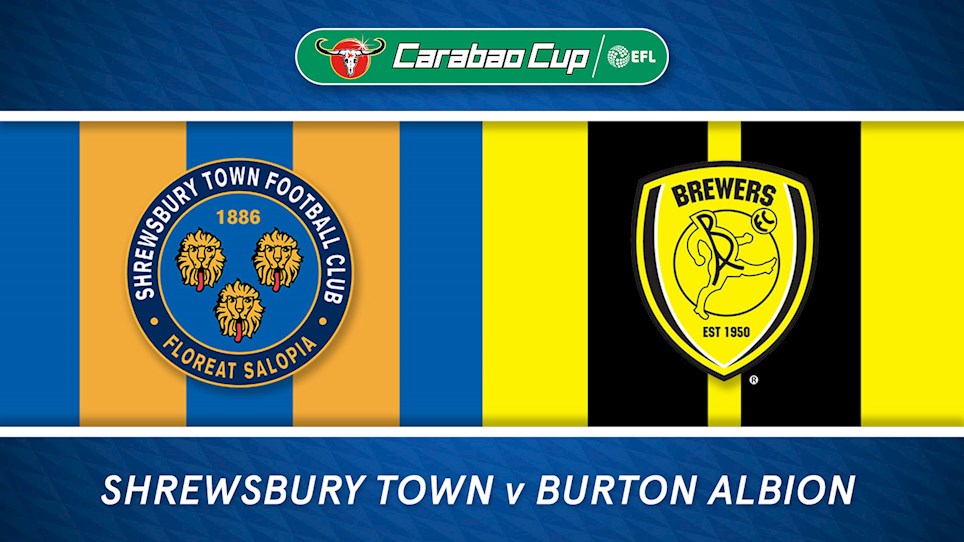 
Details for the Carabao Cup game at home to Burton Albion.

It wasn’t to be for Askey’s men in the first round of the Carabao Cup, losing out 2-1 to Nigel Clough’s Burton Albion.

Despite Town taking the lead through Shaun Whalley in the first half, the Brewers fought back in the second half and got the winning goal through Lucas Akins.

John Askey made one change from Town’s team on the weekend. Lenell John-Lewis is introduced into Town’s starting 11 for this evenings Carabao Cup tie and will lead the line against the Brewers.

Town started the game in dominant fashion, keeping possession and looking dangerous going forward. Similar to the last fixture, Town’s wing play was a constant threat to the Brewers back four. A few half-chances were coming Town’s way, but nothing significant to trouble Stephen Bywater.

Town were also doing well to neutralise any attacking threat from Nigel Clough’s men. Tidy tackling from Ryan Haynes and James Bolton ensured the door was kept shut for the Brewers attacking contingent.

Shortly before the half hour mark, Town’s dominance paid dividends. A neat through ball from Bolton found Shaun Whalley in the box; through on goal the winger made no mistakes and fired home the ball high above Bywater, putting the Shrews in the lead.

Alex Gilliead continued to be a problem for Burton’s John Brayford. The winger was often finding pockets of space on the edge of the box but couldn’t calve an opportunity out for himself.

Against the run of play, Town’s lead was snatched away. A minute before the end of the half, David Templeton found himself with half a yard of space in the Shrews box. The winger did well to beat Bolton and slotted home into the bottom corner of Joel Coleman’s net.

Town went into the break level on the score line, after a late equaliser from the Brewers. Askey’s men would have been disappointed to not be entering the break in the lead, after a good first-half performance.

Town started the second half looking to attack the Burton back line at any chance. Gilliead was looking a constant threat along the edge of the box and the winger had his first chance of the half just three minutes in. A hard long-range effort just whispered over the bar, to the relief of Bywater.

Bolton was given a yellow card in the 62nd minute, for a late challenge on Templeton.

Just a minute later, Burton were awarded a penalty by referee Graham Salisbury. The referee deemed that Luke Waterfall obstructed Scott Fraser just inside the box; Lucas Akins stepped up and slotted the ball into the left corner, giving the visitors the lead.

Burton were the team in the ascendancy as the half went on. The Brewers came close to adding another goal to their lead in the 77th minute. Liam Boyce latched onto a cross and headed the ball hard, but the Brewers sub put the ball just past the post.

As the game drew to a close, so did Town’s chances. Burton were doing a good job of sealing out Town’s forwards and Burton looked the likely team to be progressing to the next round.

The game ended 2-1 on the score sheet and John Askey’s men would have been disappointed to not be progressing to the next round of the Carabao cup.


Details for the Carabao Cup game at home to Burton Albion.

Tickets are now on sale for our home game with Burton Albion.

This game is not included for Season Ticket holders and they will need to purchase the game.

The Assit Group (West) Stand is closed for this game at present.