With Christmas all but over, Shrewsbury Town travel to Accrington in Lancashire to take on Stanley who currently occupy tenth position in Skybet League One. The last time we crossed swords with Accrington they were going great guns toward the top of the division but we managed a 1-0 home win. That was early in October and it was their only defeat in a run of six wins in seven but their form has dropped away a little as winter took hold and hadn't won a game in seven games going into their away game at Plymouth last Saturday. That 3-0 away win will have done their confidence no harm at all and given our away form they are likely to be champing at the bit as they go into their first of two seasonal home games.

This Boxing Day we bump into Jordan Clark who was a Micky Mellon Signing in 2014 and played over fifty times for us in all competitions. I'm not so sure how a player as good as he is ended up leaving but it is nice to see him doing well at a good club. He's made well over 100 league appearances and has scored 11 times and helped Accrington achieve promotion since joining in 2016. Fellow Micky Mellon signing Andy Mangan is also in the Accrington squad and he's another one it's nice to see playing at a good level. He joined at the start of the season but hasn't been quite as involved as he would have liked with just five appearances in all competitions.

Accrington have earned an average of 1.3 points per home game this season winning 30% and losing 30% at The Crown Ground.

Accrington tend to score most of their goals toward the end of the game with 8 scored in the last 30 minutes at home.

Stanley also concede more goals in the second half with 7 conceded in the last half an hour.

Neither manager has any new injury worries so both could name unchanged sides.

Our form is beginning to look pretty good but we're going to need to improve results on the road if we want to make any serious upward progress. Accrington will want to build on their win on Saturday but their last home win in League One was on October 13th so there may well be a little trepidation from the home side that we could exploit. However, if we're to get anything at Accrington we'll have to earn it.

Town were unable to take any point away from Accrington Stanley at the Wham Stadium.

Ollie Norburn’s second-half penalty wasn’t enough to see Town get any points as the home side notched twice in the first-half.

Team News: Sam Ricketts named an un-changed starting line up for this afternoon’s fixture, same as the previous team who beat Coventry City 1-0.

The game came to life with just 30 seconds on the clock. Stanley number seven Jordan Clark picked up the ball on the edge of the box and his tidy feet saw the player have a yard of space in the box. His right-foot effort flew into the corner of the goal – giving the home side an early lead.

The first 10 minutes fell in the favour of the home side. John Coleman’s men looked dangerous going forward and were predominantly the team on the front foot.

A good interception by the home side gave Stanley a golden opportunity to double the lead and they did just that. An intercepted ball on the right wing was played into Billy Kee - the striker hit his effort first-time and the ball nestled into the corner of the goal in the 22nd minute.

One of Town’s few chances came just a minute after the home side’s goal. Greg Docherty received a nice pass from Fejiri Okenabirhie and the midfielder was in a good position to shoot. Unfortunately for Town, the ball flashed just wide of the post.

Jordan Clark was given a yellow card in the 36th minute for pulling down Okenabirhie as the forward broke on the counter-attack.

Town came inches away from pulling a goal back with almost the last kick of the half. Docherty did well on the right side to beat his man and managed to flash a cross into the box. On the end of the cross was Josh Laurent, but his headed effort whistled narrowly passed the post.

The home side went into the break deservedly in the lead. Stanley had a number of chances and manage to put away two to give themselves a good advantage.

Town were awarded a penalty in the 50th minute as Okenabirhie was pulled down just inside the Stanley box. Ollie Norburn stepped up to take the penalty and calmly slotted the ball into the left corner of the goal – sending the keeper the wrong way.

Mat Sadler was booked in the 54th minute for blocking the on-coming Stanley player.

The next 10 minutes of the half consisted of both teams looking to progress up the opposition half at any given chance. Docherty was doing well to find space in the final third, but the home side were defending well as a unit.

An almost instant impact by Alex Gilliead nearly saw Town back on level terms. The winger did well to drive into the box but his effort dragged just wide of Connor Ripley’s goal.

The second-half had a much more competitive edge as time went on. Town were constantly looking to go forward but the home side also looked dangerous on the break and had the Shrews stretched at times.

The game came to an end with the home side seeing out the game to take all three points.

Tickets are now on sale for our Boxing Day Sky Bet League One trip to Accrington Stanley.

Ambulant disabled supporters pay the relevant ticket price (Adult/Concession/Junior) and are entitled to a PA ticket free as long as disabled supporter is on medium to high rate disability allowance. Please be aware that the buyer will need their documentation to enter the stadium.

There is no mention of any price increase on the day of the game.

Tickets go off sale on Monday 24th of December, at 12 noon, after then pay on the day. 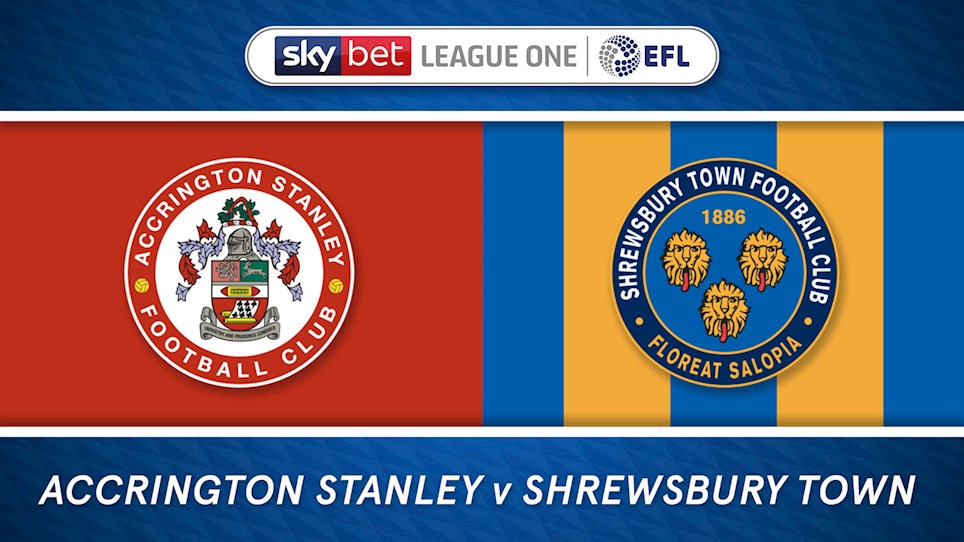