Shrewsbury Town earn a 2-1 win over Walsall in the Checkatrade Trophy.

A goal in each half for Town secured the Shrews a place in the next round of the Checkatrade Trophy.

Doug Loft and Alex Gilliead were the pair on hand to ensure Sam Ricketts’ first game ended in victory.

Team News: Sam Ricketts made a number of changes to the starting line up from the team that faced Scunthorpe United last time out in the FA Cup. Shaun Whalley also makes his return to the squad on the bench.

The half started with both teams trying to feel out the opposition. Neither team were taking risks, and that reflected in the game. The only bright spark after 10 minutes was a cross, which was flashed across goal by Ryan Haynes. However, the Walsall keeper parried the ball away to safety.

Town would have taken the lead in the 20th minute if it wasn’t for a great block by Kane Wilson. Lenell John-Lewis latched onto a miss-placed ball, but Wilson recovered well to leap in the way of the strikers shot.

Next time the visitors weren’t so lucky. The Saddlers cleared the ball from a corner, but meeting the ball on the edge of the box was Alex Gilliead. The winger let off a powerful low shot, which nestled into the corner of the goal – giving Town the lead in the 23rd minute.

After the goal the game settled down and didn’t create any fireworks. The visitors were struggling to put pressure on Town and were being kept in their own half for the majority of the first period.

The half came to an end with Town having a one-goal advantage. Town would have been happy with the score-line after an equal half of football.

The second-half began in the same vain as the first. Both teams weren’t doing enough to create openings and neither team’s keeper was being kept busy. The battle for the ball was predominantly played in the middle of the park.

Both teams were unable to have a sustained period of pressure as the clock was ticking down. Although, Town were looking good down the wings, but Ricketts’ men were not able to calve out a clear-cut chance.

The game sparked back into action in the 72nd minute with a Doug Loft goal. Shaun Whalley’s cross round Loft on the end of the box and the midfielder let off a long-range effort, which deflected off a Saddlers defender and looped into the net.

Kieron Morris pulled a goal back for the Saddlers just four minutes later. Morris received the ball on the on the edge of the box and lashed the ball towards goal. A slight deflection saw the ball fly into the corner, which pulled the score back to 2-1.

The game suddenly contained much more intensity and tempo with the Saddlers pushing to find an equaliser. The visitors were having a degree of success but nothing to trouble Joel Coleman.

The game came to an end with Town the 2-1 victors. Doug Loft and Alex Gilliead were the pair with the goals.

Details of the Checkatrade Trophy home game against Walsall

Shrewsbury Town are pleased to confirm the date for their Checkatrade Trophy second round game against Walsall.

The game will take place on Wednesday 5th December with a 7:30pm kick-off at the Montgomery Waters Meadow.

As per last season, for group matches only the Roland Wycherley East Stand and DM Recruitment North Stand will be open for these games. 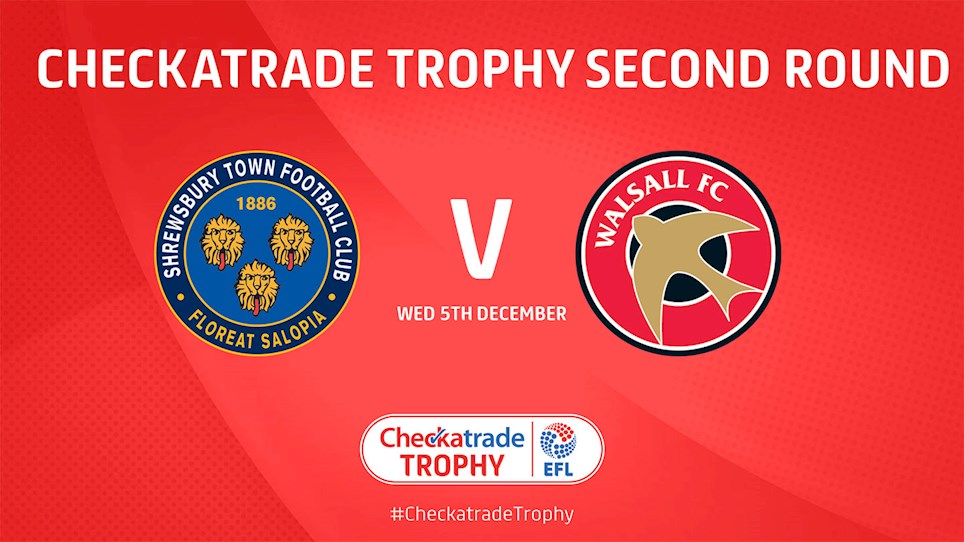 
Details of the Checkatrade Trophy home game against Walsall