The coming weekend sees Shrewsbury Town make the journey east to Peterborough to play United in Sky Bet League One. Posh have had a difficult time of it recently and find themselves out of the top six having spent much of the season there. To stop the rot, Peterborough decided to change things and replaced Steve Evans with Darren Ferguson for his third stint with the club. Since coming in, Ferguson's team has drawn once lost twice and won once. The one win was their last game which was 1-0 away win against struggling Oxford at the Kassam Stadium.

Clean Sheets
Seven, three at home and four away.

Posh have won 31% and lost 31% of their home games, making a draw look slightly more likely.

Town-Dave Edwards is still suspended, Josh Laurent and Greg Docherty could both return.

This is an interesting game because we have a team that hasn't been winning at home against visitors that have found away victories elusive. Both teams have had a little recent lift with Posh recording their first win in seven and Town unbeaten for two games. As the stats suggest, the chances of a draw are relatively high but both teams really need a little more than that if they want to rescue their respective seasons. Hopefully Josh Laurent and Greg Docherty will be fit enough to play a significant part in the game, both are key players and I'm hoping that their injury enforced absences have recharged their batteries.

Shrewsbury Town secure an away win over Peterborough United.

Shrewsbury Town secure all three points on the road with a win against Peterborough United.

Ollie Norburn and Tyrese Campbell were the pair on hand to give Town the goals for the win.

The first 10 minutes of the half was a balanced affair with both teams having good moments at the opposite end. Shaun Whalley and Tyrese Campbell looked a constant threat with their pace.

It was the home side that managed to find the first goal scoring chance, and they took that chance in the 10th minute. Jason Naismith got on the end of a free kick delivery and calmly headed the ball into the side netting – giving his team an early lead.

Town were having success on the wings, particularly through Whalley. The winger relentlessly pressured the Posh left-back and was finding crosses into the box.

Town looked to be in through Omar Beckles in the 25th minute as the defender got on the end of a cross and guided the ball towars the net, but Ivan Toney handled the ball off the line and was given a straight red card.

Ollie Norburn stood up to take the penalty for his team and calmly slotted the ball into the left corner of the net – bringing Town back onto level terms.

Town were on the front foot since the sending off and made the home side pay with a brilliant set-piece goal. Whalley slipped a ball through to Campbell, who was just inside the box, and the striker stuck a wonderful curling effort into the goal off the post.

Town were utilising the space left behind by Toney well and were spraying balls around the pitch well. Norburn continually did a good job of finding teammates in space, which was troubling the home side.

The half came to an end with Town going into the second with a 1-2 lead over the home side.

Steve Arnold was called into action with just eight minutes on the clock in the second-half. The Posh wide man did well to beat Golbounre and fired in a cross, but Arnold was on hand to mop up and claim the ball.

Norburn was booked in the 56th minute as the referee had deemed the midfielders tackle to be a foul – despite it looking like Town’s man got the ball.

Town’s midfield were busy during the game, with possession and without. Norburn came close again for Town in the 61st minute but saw is long-range driven effort drift just wide of the post.

Just a minute later the midfielder was given a second yellow card for a challenge in the middle of the park.

The home side were testing Town more and more as the half went on, but the defensive unit were remaining strong and doing well to keep the ball at bay.

Anthony Grant came inches away from scoring against his former club in the 77th minute. The midfielder got on the end of a cute pass inside the box but saw his shot rebound off the post.

Fejiri Okenabirhie was booked in the latter stages of the game for blocking Conor O’Malley’s free kick.

The game came to an end with Town securing the win on the road and leaving Peterborough with all the points.

Tickets are now on sale for our Sky Bet League One trip to the Abax Stadium.

We have been allocated 630 tickets for the game in the Main North Stand.

Disabled supporters pay the relevant price class and are entitled to a carer free of charge. Headsets for match commentary are available for visually impaired fans from main reception.

There is a barcode entry system at the Abax Stadium so ensure you keep your ticket in good condition and ensure the barcode is not detached from the ticket.

Town fans can pay on the day and but there is a £2 increase in price.

Tickets go off sale from the ticket office at 3pm on Friday 22nd February. 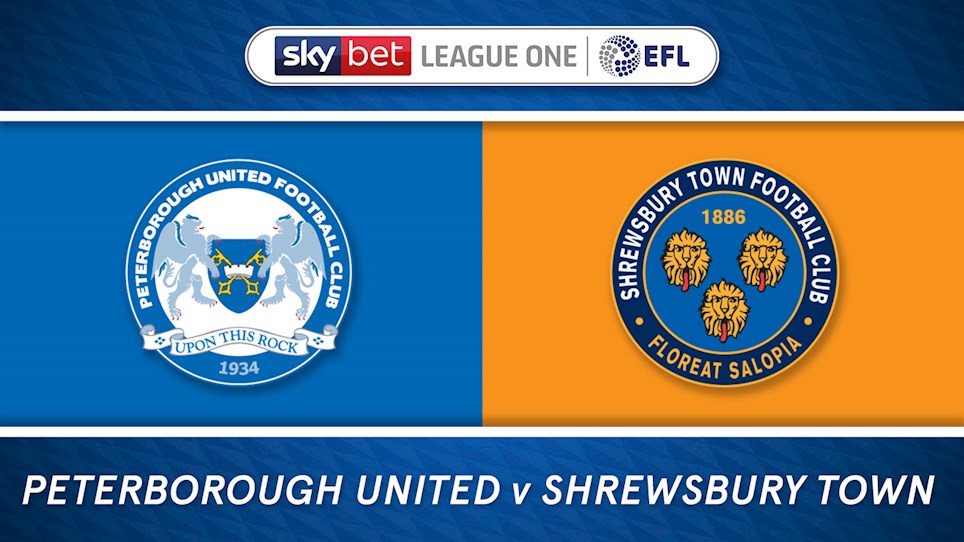