Marcus Braddock looks ahead to the weekend visit of Burton Albion

This weekend Shrewsbury Town welcome 12th placed Burton Albion to Montgomery Waters Meadow. The Brewers season so far has been one of ups and downs, a couple of defeats here, a couple of wins there and an incredible run in the EFL Cup. The cup run was particularly impressive because it reached the semi final where they met Manchester City who put paid to any cup ambitions for another season. Along the way the Brewers dispatched Burnley, Middlesbrough, Aston Villa, Notts Forest and of course ourselves who they beat 2-1 at the Meadow. That 2-1 win was only their first of two against us so far this season so a win this weekend will give them a treble over us this season.

Six at home and two away.

Burton have scored 1.1 goals away from home with 1.3 goals scored per game. They concede an average of 1.5 per away game, which is why their away record, shows just four wins so far this season. However, their four away draws this season shows that they weren't too far away from a much higher league position.

Romaine Vincula is still injured, Dave Edwards is suspended and Greg Docherty may not feature after his facial injury last weekend.

It's going to be another tough one against a team that's kept clean sheets in their last two games. Doing without Greg Docherty is also a blow but if we can replicate our better performances for the entirety of the game then we've got a decent chance of getting three valuable points to help us climb out of the Sky Bet League One basement. It's obvious from the stats that Liam Boyce is going to be someone to keep an eye on very closely but there are goalscorers throughout this team so we need to be alert to everything. One thing that will help is seven days without a game for the first time in a month so hopefully we'll have a bit of a spring in our steps.

Shrewsbury Town battle it out with Burton Albion to earn a point.

Shrewsbury Town were unable to take all three points against Burton and shared the points with the visitors.

Town took an early lead through Tyrese Campbell but Burton fired back to earn a point.

Sam Ricketts was unable to select four of his squad for the game against Burton Albion. Town were without Josh Laurent, Greg Docherty, and Romain Vincelot through injury and Dave Edwards due to suspension. Mat Sadler was also replaced in the starting 11 in favour of Luke Waterfall.

Town started the game in the best way possible with an eighth minute goal. Tyrese Campbell managed to get on the end of a great pass from Ro-Shaun Williams as Shaun Whalley’s dummy fooled the defender. Campbell went one-on-one with the keeper and calmly slotted the ball into the corner of the goal.

The Brewers were dealt a hint of luck just two minutes after the opener and managed to pull a goal back. Omar Beckles looked to have been fouled inside the box as David Templeton rose above the Town defence to head home from a crossed ball – bringing the score back level.

James Bolton was given a yellow card during the early stages of the game for a late tackle on Brewers goal-scorer Templeton.

Whalley had a great opportunity to put Town back into the lead with 20 minutes on the clock. The winger intercepted the ball just inside the box but wasn’t able to get the ball out from his feat and couldn’t generate enough power to trouble Bradley Collins.

A great tackle by Williams surely stopped Albion from getting another goal. Liam Boyce had a yard of space in the box and was shaping up to shoot. Luckily for Town, Williams slid in and took the ball away from the Brewers frontman.

The half came to an end with both sides going into the break level on the score sheet. Some positive football from Town would have given Sam Ricketts and his team encouragement going into the second-half.

The half began with both teams looking extremely competitive and keen to impress onto the opposition. Bolton was close to putting the ball in the net for Town in the 53rd minute as he latched onto a cross but saw the ball flash wide.

It wasn’t from a lack of trying that Town that saw minimal goalmouth action. Whalley and Alex Gilliead were both pushing hard in the middle of the park but the visitors were remaining defensively resolute.

The visitors were also pushing for the goal to take them into the lead but were unable to find the target through Lucas Akins in the 72nd minute. The Brewers man got on the end of a through ball but saw his effort dash past the post.

Williams was given a yellow card in the 78th minute for pulling back Marcus Harness.

Ollie Norburn was also booked just a minute later for a foul just outside the Town box.

Town were pushing hard to find a second goal with 10 minutes left on the clock and were having success in finding ways into the box. Burton however were remaining solid and managing to find last ditch blocks and tackles.

Harness was given a yellow card in the 86th minute for blocking Town from resuming the game.

Town were awarded a free kick just outside the box right at the death. Whalley stood over the ball but his effort went straight into the keeper’s arms.

The game came to an end with Town sharing the points with the visitors.

The draw of the Postcode Ticket Giveaway has taken place and the winning postcode is SY16 1NS.

For every Sky Bet League One game this season we are picking one season ticket at random and then give away tickets to everyone in their postcode.

Close to 400 tickets have been given away since the start of the season with people getting the chance to take in a Town home game for free.

If you are in SY16 1NS then keep an eye on your letterbox for your free ticket vouchers. 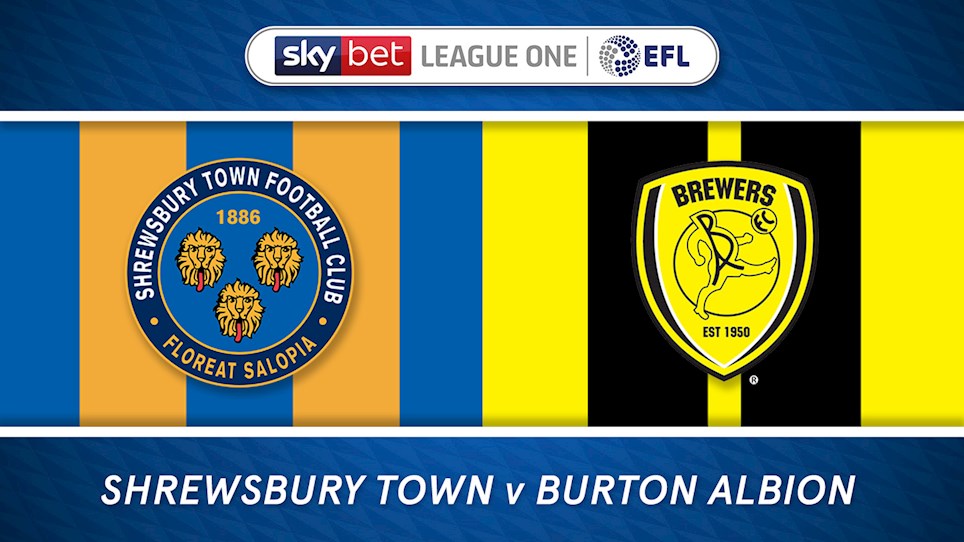