Marcus Braddock looks ahead to this evenings game with Doncaster Rov

Tonight, Shrewsbury Town welcome Doncaster to Montgomery Waters Meadow in Skybet League One. Donny currently occupy 6th place with 54 points and two games in hand on those around them after 32 games this season. Rovers have won twice and drawn three times in their last five league games and haven't lost a league game since January 12th when they lost 3-2 at Wycombe. Their last game was a 1-1 draw at Scunthorpe with Malik Wilks taking the lead for Rovers after 25 minutes.

Clean Sheets
Seven at home and one away from home.

They've scored first in ten of their 16 away games this season but have only maintained that lead until half time 6 times.

Their best half in terms of goals is the second with 67% of Rovers goals in the second 45. They also concede more in the second half with 9 goals conceded in the last 15 minutes this season.

Dave Edwards and Ollie Norburn are both suspended.

This is another tough game, which is a shame because it's our game in hand on those below. Peterborough looked a difficult game too but we managed to prevail and if we manage to take all three points we'll jump to 17th with a home game against bottom placed Wimbledon next up. However, this is also one of Doncaster's games in hand too and they need the points just as badly as we do for different reasons. So they're likely to come here all guns blazing and we need to be ready for that. I think we can get the result we need but it's going to take massive performances from everybody again. 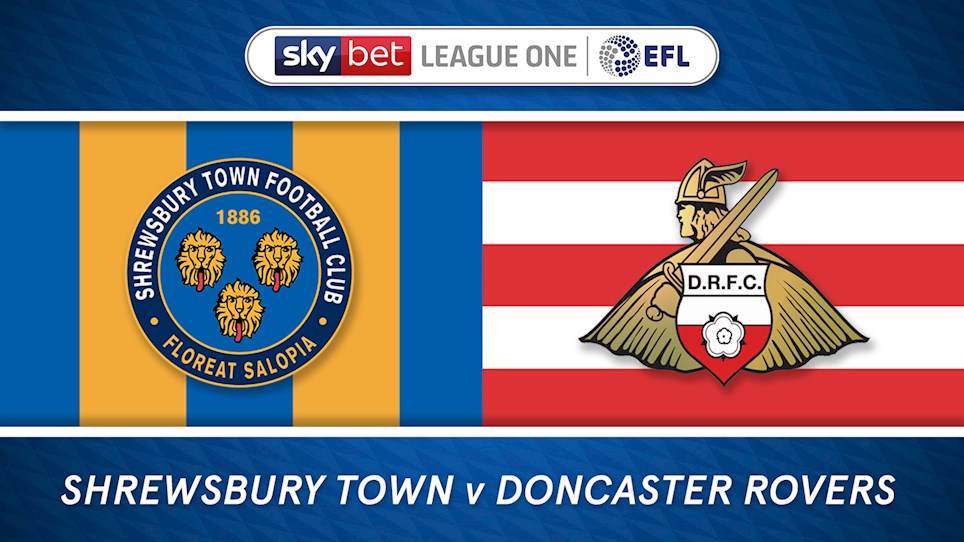 A superb first-half performance from Sam Ricketts’ men earned his side a 2-0 win over Doncaster Rovers – making it two wins in a row.

Tyrese Campbell found the back of the net for his team, as did Josh Laurent as Town went on to secure all three points.

The game started with goal action right from the first whistle. It took only seven minutes for Town to have a good chance at taking the lead. Greg Docherty fed through a ball into the box to Fejiri Okenabirhie, but the striker couldn’t make a clear connection with the ball due to heavy pressure from the Rovers defence.

Luke Waterfall was given a yellow card just 10 minutes into the game for a challenge Tommy Rowe.

Town were having success with their attacks and came close to netting for the second time just after the 10-minute mark. Tyrese Campbell dribbled all the way from the halfway line and managed to drive a powerful shot towards goal but saw the ball flash wide.

Town’s attacking display continued to grow and the only thing denying Campbell a goal was a great save from Marco Marosi. The striker latched onto a Docherty pass but was unable to beat the keeper from distance with his powerful effort.

The goal finally came for the home side in the 18th minute. Josh Laurent received the ball just inside of the box from a cross, dummied the ball past his man and buried the ball into the right-hand corner of the net – giving his side the early advantage.

The next 10 minutes were relatively calm as the visitors were trying to push themselves back into the game. Rovers were havening limited success but did occasionally find crosses into the box.

Town doubled the lead with just 10 minutes to go in the half.  Campbell got on the end of a sublime through ball and found himself one-on-one with the keeper. Town’s frontman didn’t need another opportunity and fired the ball across the keeper into the corner.

Anthony Grant was given a yellow card in the 39th minute for a late challenge in the middle of the park.

Town were doing great to deny the visitor any real good chances at goal and Steve Arnold’s first real save came in the 41st minute. Malik Wilks used his pace and power to drive towards goal but his driven shot was calmly collected by Town’s man in goal.

The half came to an end, and it would have been a pleasing half for Sam Ricketts and his team as they went into the break two goals up on the score sheet.

Rovers came out from the break and looked determined to force themselves into the box and impose themselves on the game. The visitors had a couple of distant chances within the first 10 minutes but nothing to really trouble Town’s keeper.

Rovers were having good moments in the game, particularly on the counter-attack. A flurry of chances came their way in the 60th minute but the Town defence threw their bodies in the way to block every shot.

The half was a contrast compared to the first 45 minutes as neither team had much goalmouth action. The battle was being fought out in the middle of the park with both teams looking to grasp possession and move positively with the ball.

Town were awarded a free kick around 30 yards away from goal as a Rovers defender brought down Whalley. The winger stood over the free kick but couldn’t find the target.

Town were very lucky to have kept the two-goal advantage intact just before the 80th minute mark. A number of shots were fired towards the net but saves from Arnold and a goal line clearance ensured Town’s 2-0 lead stayed.

The visitors were beginning to have some good chances and would have felt unlucky to not have pulled a goal back. Denying the visitors a goal was a brilliant reflex save from close range by Steve Arnold.

The game came to an end with Town seeing out the fixture and earning three points against a highly competitive Doncaster side.

Tickets are now on sale for our home game with Doncaster Rovers.