Despite scoring two goals, Town weren’t able to cause an upset and secure a spot in the FA Cup fifth-round.

Josh Laurent and James Bolton got Town’s goals but it wasn’t enough to outscore the home side who won 3-2.

Town’s evening didn’t get off to a great start inside Molineux as the home side managed to take an early lead. A pacey whipped cross found Matt Doherty and the defender thrashed the ball into the bottom left corner.

Town responded in the best way just after the 10-minute mark.  Ollie Norburn swung in a corner and James Bolton launched himself towards the ball and managed to head in past John Ruddy.

Wolves looked to be in a again just after 20 minutes had passed by. Jonny Otto managed to steer a volley on target but Luke Waterfall threw himself in front of the ball to deny the home side a real chance at their second goal.

Wolves were pressuring Town’s back line and were having success on the wings. Jonny and Doherty were proving to be a good challenge for Town’s fullbacks but the pair were remaining solid.

Norburn was given a yellow card in the 35th minute for fouling Adama Traore as the winger looked to burst through the midfield.

Town were growing into the game as the minutes went by and were looking more and more dangerous as the first-half was drawing to a close. In the 40th minute Josh Laurent tried a long-range shot and his bravery paid off as the ball slipped under Ruddy and into the back of the net.

The end-to-end half continued towards the last seconds of injury time and the home side managed to draw level. Jonny fired in another good cross and Doherty was there once again to head home for the Molineux men.

The half came to an end with both teams all-square. Town would have been disappointed not to have gone into the break in the lead but would have been proud to have taken the game to the Premier League outfit.

The home side came out from the break determined to force the ball into Town’s half. Wolves were having success on the wings, particularity with Traore – who utilised his explosive pace time and time again.

Some individual brilliance from Ivan Cavaleiro in the 62nd minute gave Wolves the lead once again. Ryan Haynes was unable to block the wingers run into the box - Cavaleiro cut inside with the ball and slotted home into the corner of the goal.

Town were pushing back and didn’t let the home sides advances deter them from pressuring the Wolves back line. Despite the good work going forward, Town were being limited to long-range efforts.

Second-half substitution Raul Jimenez nearly gave Wolves another goal in the 80th minute. The striker received a pass just inside the box and guided his shot towards the corner of the goal, but Steve Arnold got down well to claim the ball.

Omar Beckles nearly did the same thing for Town up the other end of the pitch. The defenders great run was capped off with a good shot, but his effort narrowly went the wrong side of the post.

The game came to an end with the home side taking the win and securing a spot in the fifth round. A resilient performance from Town wasn’t enough to snatch the win from Nuno’s Wolves.

Tickets details have been confirmed for Shrewsbury Town’s game against Wolves in the Emirates FA Cup Fourth Round Replay.

The game will take place on Tuesday 5th February at Molineux Stadium and tickets will go on-sale from Wednesday 30th January at 9am (Season Ticket Holders Only). Should we receive the tickets early enough on Tuesday, then the tickets will be available online that evening.

Full details of this process can be found further down the page. Each supporter will be able to buy two tickets with the Season Ticket Holders given the option to purchase a further 2 Child tickets (U17).

Tickets can be purchased up to 2pm on the Tuesday 5th February 2019.

As this is an away game, Season Ticket holders do not have their normal reserved seat so are able to purchase an additional ticket online.

Online Orders will be available for collection 24 hours after purchase from the Main Reception at Montgomery Waters Meadow.

Tickets are on General Sale now for those with previous purchase history or proof of address (subject to availability).

Town fans WILL NOT be able to buy tickets on the night at Molineux.

Tickets go off sale from the ticket office at 2pm.

Should Season Ticket Holders or Loyalty Point holders require additional tickets, these can be bought from Monday during General Sale (subject to availability). 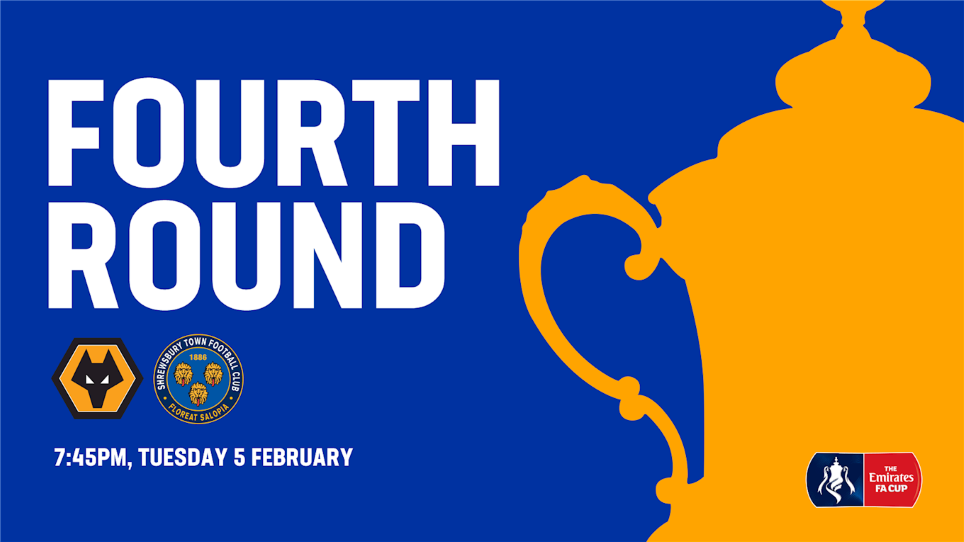