Marcus Braddock looks ahead to Town's visit to Bla

Shrewsbury Town go into this weekends game at Blackpool with a spring in their steps after their stunning comeback against Stoke City. The Tangerines are having a pretty decent season on the pitch and are sitting in 9th place in League One just a point behind Coventry but with one point less and with two games in hand. Their recent form hasn't been great with just one win in their six league games since December 8th. However, a 1-0 away win at league leaders Portsmouth in their last game put paid to that win free run and Blackpool will also have a pretty sizeable spring in their steps too.

Blackpool have an above average points haul at home this season with 1.6 per game. The league One average is 1.5.

They also concede less goals at home than the league average with 1 goal conceded against an average 1.2 for the league.

They've also won less (6) than half of their home games in the league.

Blackpool have no fresh injury worries but do welcome defenders Curtis Tilt,  Ollie Turton and striker Nathan Delfouneso back from injury.

Ollie Norburn returns after his cup suspension but Dave Edwards has a groin injury and will miss out.

Blackpool have had a difficult time without some key players but they look set to return to the squad this weekend. They also come into the game with an away win against the league leaders under their belts, so we have a difficult game on our hands. We also have the distraction the Wolves game next weekend, hopefully Sam Ricketts can keep the focus on this weekends game. Our comeback against Stoke was impressive this week and if we play like we did in the second half, we can come home with a point or three.

Town earn a point and a clean sheet away to Blackpool

The game at Blackpool’s Bloomfield Road came to an end with the scores remaining level.

A more competitive second-half didn’t see either team take al three points as Town left the northwest with a point and a clean sheet.

Team News: Alex Gilliead and Aaron Amadi-Holloway were the two players who made way in today’s starting line up and were replaced by Ollie Norburn and Omar Beckles.

Town’s first 10 minutes in Blackpool started in very positive fashion, with the Shrews dominating the ball and being the team on the front foot. Greg Docherty and Josh Laurent were the two who were mainly pushing the pace.

Laurent’s hard work saw the midfielder get into good positions in and around the Pool box. Unfortunately for Laurent, the final ball was getting a late block or just firing wide.

Steve Arnold was rarely called into action, even with over 30 minutes on the clock but Town’s shot stopper was efficient and calm when dealing with the rare cross into the Shrews danger zone.

Ollie Norburn was also showing his class in winning and distributing the ball well. The midfielder was getting stuck in and really challenging the home sides midfield contingent.

The half came to an end with neither team able to break the deadlock. Chances were scarce for both sides. Town would have been pleased with the first-half work and would have felt confident going into the next period.

The second-half began identically to the first, with Town dominating the ball and pushing forward at any given chance. Docherty was another bright spark in the middle of the pitch – winning balls and pushing the team forward.

A driven effort from Norburn had the Town fans on their feet in the 56th minute. The powerful effort looked to be heading towards goal, but the home side deflected the ball out for a corner – which ultimately didn’t create a chance.

The home side had to wait until the 66th minute for a real chance at goal. A good cross was fired towards Armand Gnanduillet but the Pool 21 was unable to capitalise and fired the ball over the bar.

The next chance of the game came in the 82nd minute as the home side rattled the ball from outside of the box. Some good movement from Long gave the forward a yard of space just outside the box but his effort cannoned back off the woodwork.

The game came to an end with neither team able to break the deadlock as the points were shared at Bloomfield Road.

Tickets are now on sale for our Sky Bet League One trip to Bloomfield Road to take on Blackpool.

We have been allocated 500 tickets which are located within the North Stand.

Tickets go off sale at 12 noon on Friday 18th of January.

Town supporters can buy tickets on the day with no increase in price on the day. 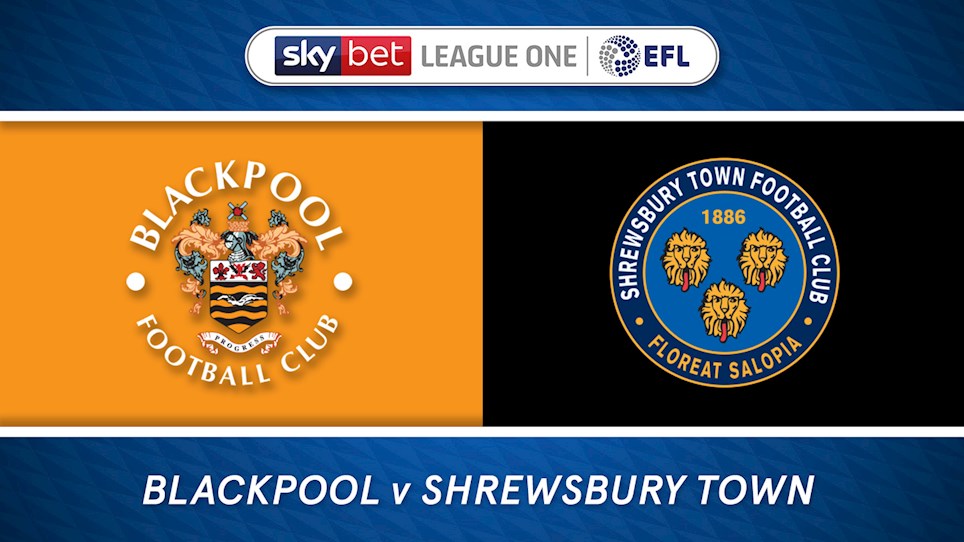