Marcus Braddock looks ahead to the visit of Charlton Athletic

Shrewsbury Town go into this weekend’s game at home to Charlton after a busy week with games in two competitions and plenty going on off the pitch. You could almost be forgiven for forgetting about this weekend’s home game against 4th placed Charlton Athletic with so much happening. The Addicks have had a good season so far and look set for another play-off position finish but a closer look at their stats show that they need to win this weekend. The three clubs directly behind them have games in hand on the Addicks so a slip up is likely to let one of them in. Recent form has been pretty good apart from a couple of away defeats over the Christmas period and to be fair, those two games were against Coventry and Barnsley who have both been in decent form. Since then they've played at home twice drawing 1-1 with Sunderland last Saturday and beating Walsall 2-1 on New Years Day.

Five at home and 2 away. Charlton's last clean sheet was at home in the 1-0 home win to Gillingham and their last away clean sheet was from a 2-0 at Walsall in early November.

Charlton have only failed to score in one away game this season in League One and that was against Rochdale in Late October.

They have scored an average of  1.54 goals away from home and have conceded exactly the same amount, 1.54.

Both teams have scored in 77% of Charlton's away games this season, much higher than the league average of just over 50%.

We've seen a few players leave the club this week but none with any recent involvement with our first team so there should be any changes on that front. Returning hero Dave Edwards is in full training but Sam Ricketts has said that Edwards will only play if it suits the team.

Lenell John-Lewis received bad news this week about his injury from the Stoke game and will need an operation and a lengthy period of rehabilitation. He's not expected to play any further part in this seasons campaign and could be out as long as a year. Shaun Whalley is still suffering from a hamstring injury.

Charlton have no new injury worries but have signed goalkeeper Chris Maxwell on loan from Preston and Defender Ben Purrington on loan from Rotherham.

This game is as difficult to call as the play-off games last season and it could be a tight game again. However, the Addicks have two goalscorers in exceptional form this season and we're going to have to restrict their movement if we're to get anything from the game. Both Town and the Addicks have teams below them snapping at their heels so there is pressure on both teams and it's the team that copes the best with that pressure that's likely to prevail. 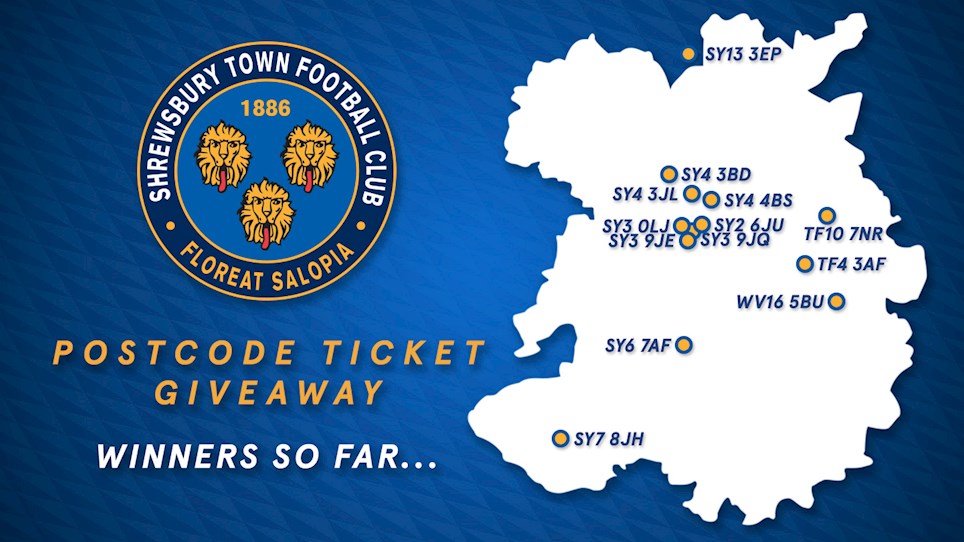 TF4 3AF Is The Lucky Postcode

Shrewsbury Town were unable to keep the recent good home form going and lost out to Charlton Athletic 3-0.

Lyle Taylor, Karlan Grant, and Darren Pratley were the trio on form to hand the visitors the three goals and three points.

Team News: Sam Ricketts reverted back to a similar line up compared to the previous league team sheets. Dave Edwards was also introduced to the match day squad and was named on the bench.

Charlton Athletic looked like they had come to the Montgomery Waters Meadow determined to trouble the home side at any give chance. Town were under the cosh quite frequently within the first 10 minutes and Steve Arnold was kept busy, the keeper but stood firm to the barrages of Addicks crosses.

Both teams were proving hard to break down but Town would have been disappointed not to score in the 20th minute. Some great play saw Aaron Amadi-Holloway have the opportunity to put the ball across the face of the box. On the end of the ball was Josh Laurent, but the midfielder was denied a goal due to a great save from Dillon Phillips.

The visitors managed to take the lead in the 27th minute. Lyle Taylor managed to pounce on a mistake in the box and the Addicks man managed to push the ball over the line.

Despite going a goal down, the home side were the team trying to push hard to find that goal. Greg Docherty looked a threat in the other half and constantly put pressure on the Charlton back line.

Ryan Haynes came close right on the stroke of half-time. The defender’s tidy feet saw him move into half a yard of space just outside the box. Haynes let off his curling effort but the Charlton keeper covered well to make a goo d save.

The half came to an end with the Addicks in the lead. Lyle Taylor pounced on a mistake and broke the deadlock for the visitors.

A big mistake Ollie Norburn nearly cost Town another goal right afrer the second-half had resumed. The midfielder tried to play a ball back to Arnold but didn’t put enough power on the ball. Arnold however made a great one-on-one save to deny Karlan Grant.

Darren Pratley was given a yellow card in the 49th minute for blocking a Shrewsbury free-kick.

Another defensive mistake cost Town a second goal in the 55th minute. Luke Waterfall miss-timed his clearance and the ball fell to Pratley. The midfielder lashed a wonderful effort that nestled in the top right corner.

Arnold was called into action a number of times in the game but Town’s goalkeeper made another great one-on-one save in the 70th minute to deny Charlton a third goal.

Charlton were a penalty in the 80th minute. Anthony Grant made a challenge just inside the box but looked to have got the ball. Karlan Grant stood up to take the penalty and slotted the ball home in the left corner.

The game came to an end with Town suffering a disappointing 3-0 defeat.

TF4 3AF Is The Lucky Postcode

Tickets are now on sale for our home game with Charlton Athletic.