Marcus Braddock looks ahead to the Emirates FA

It's Emirates FA Cup time again with Town facing Potteries giants Stoke City in the third round at Montgomery Waters Meadow. The Potters are a Championship team after last season’s relegation from the Premier League and it seems to be a bit of a shock to the system judging by their mid-table position. Former Burton, Birmingham and Derby coach Gary Rowett took the reins at the Victoria Ground ready for the start of the season and has since seen his players get 8 wins eleven draws and seven defeats. Current form is a little patchy with just three wins in their last ten league games and just one in their last five. Their last away win was back in late October when a clean sheet and a Darren Fletcher goal was enough to beat Bristol Rovers.

Six at home and four away.

Stoke have won 15% of their away games in the league this season and 50% of their cup games although this only amounts to 2 games in the League Cup, the first a win at home to Huddersfield and the second a defeat at Notts Forest.

The Potters have conceded the most away goals in the final fifteen minutes of the first half with five conceded. The second half of away games has been the most productive with 67% of their goals scored. They've also conceded exactly the same amount of goals over the same time period which counts for 56%.

Gary Rowett appears to have a spot of illness in the camp with both Ryan Shawcross and ex-Town midfielder Ryan woods suffering. They may yet be fit for the weekend but Joe Allen looks likely to miss out after a recent knock.

Town will be without Fejiri Okenabirhie after two yellow cards in the F.A. Cup and Shaun Whalley is still out of contention following a hamstring injury.

This game may have had a little more spice last season with City still in the top flight and with us at the top end of the table. Having said that, we had West Ham at home this time last season and Stoke were dumped out by League One Coventry. The season before that Stoke lost to Wolves and we didn't make it to the third round so neither team has a recent history beyond this round. As things stand, Stoke are not enjoying a rich vein of away form and we've not been too bad at home so there is a chance of a Town win this weekend but we'll have to work hard for it as Stoke have some excellent footballers and wont be beaten without a fight. A look at the Potters away form makes me wonder if a draw may be on the cards as they've drawn eight times away from home this season.  A win by either team may be the preferred result with so much football yet to be played and I think we may be able to squeeze a result out of this one if we play at our best. 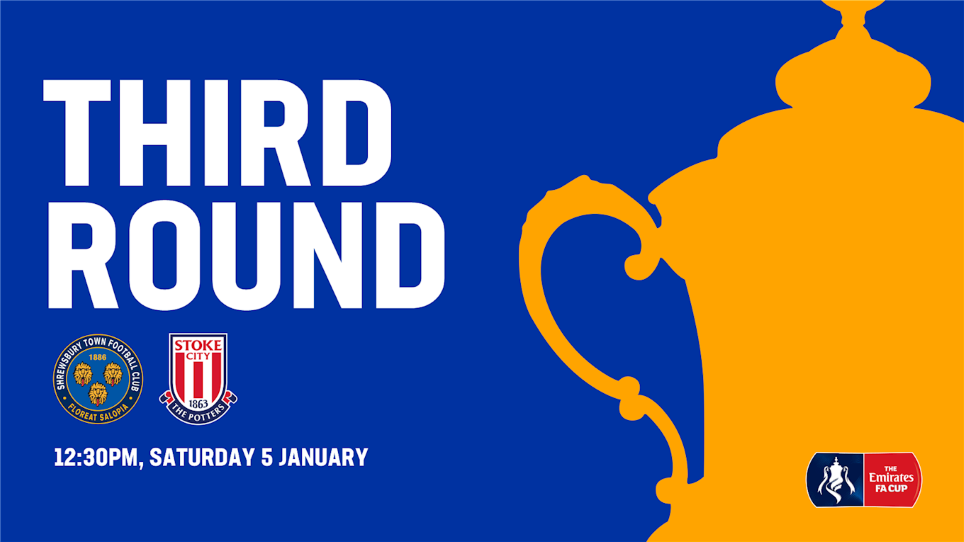 Town draw 1-1 with Stoke City at the Montgome

A first-half goal wasn’t enough to see Town progress into the next round as the visitors found an equaliser.

Ollie Norburn and Peter Crouch got the goals that will now see Town and the Potters face off in a replay fixture.

Team News: Sam Ricketts named the same team for the FA Cup tie with Stoke City as he did for Town’s Sky Bet League One fixture with Sunderland.

The third-round tie with Stoke City promised an entertaining game, and the first 10 minutes provided. Town would have been forgiven for sitting back against the Championship opposition but Sam Ricketts’ team were competing and matching the visitors.

Lenell John-Lewis was forced to leave the pitch after 16 minutes. The striker pulled up sharply and after running for the ball and picked up an unfortunate injury.

Town looked dangerous on every attack and it was Greg Docherty who orchestrated a number of Town’s positive moves. The midfielder continually picked the ball up in the middle of the park and forced the play up the pitch.

The only real chance the visiotrs got in the early stages of the half was a driven long-range effort by the Potters centre-back Ashley Williams. Williams picked the ball up near the edge of the box but saw his powerful effort go wide of the post.

Steve Arnold was called into action just a few minutes later and made a great save for Town. Tom Ince found himself through on goal, but Arnold got down low and parried the ball away to safety – keeping the scores level.

Ollie Norburn was given a yellow card with 15 minutes to go, as the referee deemed the midfielders challenge to be a foul.

Town were awarded a penalty on the stroke of half time for a foul on Aaron Amadi-Holloway. Norburn stepped up to take the penalty and buried the ball in the right hand corner – sending the keeper the wrong way.

Town more than matched the visitors in the early stages of the half and looked to be the team in control as the half drew to a close.  A late penalty saw Town go into the break with a deserved lead.

The visitors came out for the second-half determined to get a goal back. The Potters were pushing forward and pressuring Town’s back four, but Town remained strong and were doing a good job sealing out Garry Rowett’s men.

Town came inches away from doubling the lead just 10 minutes into the half. Another great ball from Docherty found its way to the head of Amadi-Holloway, but the striker headed the ball over the bar.

Ince was the danger man for the visitors and looked a continual threat as the game went on. Despite looking positive, the winger was unable to find the target and was being limited to long-range efforts.

The visitors managed to pull a goal back just a minute later. Second-half sub Peter Crouch got on the end of a driven cross and managed to knock the ball over the line after sustained pressure on the Town back line.

Mat Sadler was withdrawn from the game in the 82nd minute after sustaining a head injury due to a clash of heads.

The game came to an end level on the score sheet and Town will play a replay at the Bet 365 Stadium.

Early opening ahead of Saturday's early kick-off against Stoke City

The main Ticket Office is open at 9am tomorrow with the West Stand Ticket Office opening at 10.30am.
With upwards of 7,500 tickets sold already there will be limited availability in certain areas at both Ticket Offices.
If you are planning to come and buy tickets tomorrow, you will need to have a registered account with the club (supporter number).
If you do not have an account or any purchase history and are local we will need a proof of address to allow us to be able to create the account for you.