Marcus Braddock looks ahead to this evenings trip to Plymouth Argyle

When we last played Plymouth they were in the mire that is the drop zone, needing to beat us to climb to a safer position. They didn't get their win, we ran out 2-0 winners with goals from Greg Docherty and Fejiri Okenabirhie but they did eventually climb to safety and are now in 15th position. However, quick scan of Skybet League One shows the very fine margins between with just four points the difference between the clubs from 12th to 20th.

Clean Sheets
Six. Three at home and three away.

Plymouth have collected an average of 1.2 points per game and have scored an average of 1.25 goals at home. They've conceded 1.6 per game in Skybet League One and have drawn 25% of games at home. Their best period of games at home is the middle 15 minutes of the second half. They've scored eleven times although that may well be in reaction to the eight they've conceded in the first fifteen minutes of the second half.

Antoni Sarcevic returns to the Plymouth squad a two-match suspension.

Anthony Grant is available after his suspension but James Bolton is still struggling with an ankle problem.  Romaine Vincelot has returned to full training.

With a full set of fixtures tonight, League One may well make interesting reading tomorrow morning. Depending on results we could find ourselves in mid-table or in the relegation places depending on our performance. Hopefully we'll avoid the latter and get a little more than we did at the weekend. The return of Anthony Grant could be a big factor in our performance, his direction and experience should hopefully add something to our midfield.

Shrewsbury Town lose out on the road against Plymouth Argyle.

Shrewsbury Town were unable to bounce back from defeat and lost out 2-1 to Plymouth Argyle.

Town would have been disappointed after having a number of chances in the second-half, but the Shrews were unable to take any points away from Home Park.

The home side were playing good football right from the starting whistle. The home side took advantage and managed to notch a goal with eight minutes on the clock. Argyle fired in a low cross, which Steve Arnold saved, but he parried the ball into the path of Freddie Ladapo and the striker tapped home the ball from close range.

Arnold was called into action again just before the 15-minute mark. Arnold managed to get down well to his right-hand side quickly to deny Argyle securing a second from a good and powerful volley.

The home side were nearly in again just before 30 minutes had passed. Ruben Lameiras fired a great cross along the six-yard box but the home side’s forwards couldn’t get a man on the end.

Town managed to make Mat Macey work in the 34th minute. Ollie Norburn skipped passed his man and let off a shot from long range but saw his deflected effort calmly claimed by the Pilgrims keeper.

Shaun Whalley was shown a yellow card by referee Brett Huxtable for handball just outside Town’s box. Town’s wall stood strong and took all the power of the resulting free-kick.

The half came to an end with the home side keeping their one goal advantage.

An amazing run and tidy feet nearly gave the home side another goal shortly into the half. Lameiras dribbled around the Town defence to get in front of goal, but the Argyle man saw his shot drift just wide of the post.

Town came close themselves in the 55th minute. Omar Beckles found himself in the box and nearly got on the end of a cross, but the ball whipped past the defender agonisingly close.

Town were awarded a penalty in the 59th minute as Norburn was brought down inside the box. The midfielder stepped up to take the spot-kick and despite the goalkeeper making the save, Norburn managed to poke home the rebound – brining Town back on level terms.

Luke Waterfall was key in keeping the scores level in the 69th minute. The defender managed to get over towards Ladapo as the striker was through on goal. Waterfall managed to fling himself towards the shot and made a great block.

Town were growing into the game and began to create a plethora of chances in and around the Argyle box. Whalley looked continually dangerous on the right wing and was causing the home side problems.

Waterfall was shown a yellow card towards the latter stages of the game for a foul in the middle of the park.

Plymouth were awarded a penalty with just a few minutes to go. Graham Carey took the spot kick and managed to squeeze the ball into the corner, just past the keeper’s hands.

The game came to an end with the home side securing all three points with a 2-1 victory.

Tickets are now on sale for our Sky Bet League One trip to Home Park.

We have been allocated 580 tickets for the game in the Barn Park Stand.

Anyone wanting a ‘Family Ticket’ for the Plymouth game needs to visit the ticket office or order over the phone.

Town fans can pay on the day and but there is a £2 increase in price.

Tickets go off sale at 12 noon on Tuesday 12th March, after that it is pay on the day at Home Park. 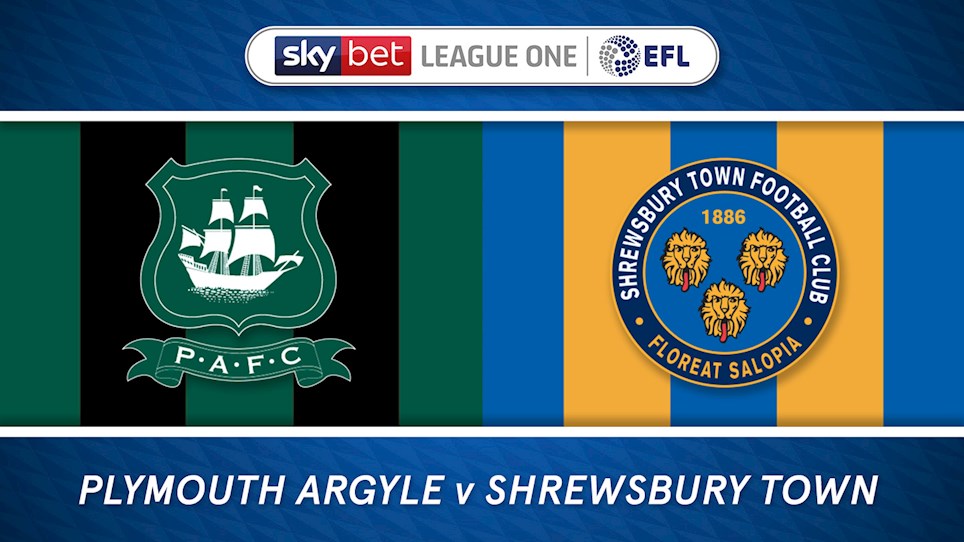