With the weekend creeping ever closer we turn our attentions toward Saturdays football and Shrewsbury Towns trip to Rochdale. To say that Rochdale fans have had a particularly difficult 2019 so far wouldn't be any sort of overstatement. Their season wasn't going particularly brilliantly up until that point but they'd won both Christmas games and might well have been looking forward to the rest of the season. However, on 29th of December they lost 2-1 at home to Bradford and they don't look to have recovered. Since then they've won at Walsall and drawn at home to Fleetwood meaning that they've not won at Spotland since December 29th. They parted company with Rochdale Legend Keith Hill this week, I doubt it was something they did lightly, Keith Hill and Rochdale is as familiar to lower league football fans as fish and chips but when a team is in free-fall like they were, something has to be done.

Clean Sheets
Five at home and two away from home.

Rochdale midfielder Ethan Hamilton is suspended and Notts Forest loanee forward Zach Clough may miss out because of a groin injury.

Town will be without Anthony Grant  who is suspended and Romain Vincalot who is on his way back from a knee injury.  Steve Arnold will be assessed closer to the game.

Why do teams always seem to get rid of a failing manager before they play us? It seems to happen more often than it should but then managerial sackings are hardly thin on the ground. At the time of writing a successor to Hill hadn't been found but First team coach Brian Barry Murphy and academy manager Tony Ellis look to be holding the reins and they will be pointing to our away record as encouragement. Having seen how our own caretaker managers did this season we wont need reminding that they can be quite effective and we need to guard against that. We're in dire need of points as much as Rochdale are so we need to be as professional as we can and perform like we know they can for 90 minutes.

David Longwell made four changes to the team that drew away to Blackpool last week. Edan Sears, Ryan Grosvenor and Taylor Townsend replaced Dan Walker, Lewis Redding and Lifumpa Mwandwe respectively. Goalkeeper Jack Atkinson returns to the starting line-up, after spending a lengthy spell out of the team due to a knee injury. He replaced Jaden Bevan, who had started in the last two games.

Shrewsbury captain James Rowland was forced to intercept Fabio Tavares in the opening minute of the game, when the Rochdale player was gifted the ball from Jack Atkinson as he took his goal kick. Reiss Corfield was forced to make a crucial tackle minutes later and managed to take the ball from Joseph Dunne, which resulted in a Rochdale throw in. Town suffered a blow in just the 7th minute when Corfield was forced off through injury, and one minute later found themselves one goal behind. Louis White struck the ball from outside the box and his shot took a slight deflection off Luke Ward and found the top left corner of Atkinson’s goal.

Substitute Jacob Bell was fouled by Florent Hoti a few minutes later and James Rowland stood up to take the resulting free-kick. The cross managed to find Luke Ward whose header was inches over the crossbar. It took a deflection though and Town were awarded a corner which Rowland took, but the wind carried his cross out of play and onto the roof off Morgan Piper’s goal. Chances soon came for both teams; the first was for Rochdale and Florian Yonsian nearly doubled their lead when he played the ball across the goal, but there was no one there to convert it into a goal. Town had a chance of their own when Jamaine Turner managed to get the ball into the penalty area but it was intercepted before it could reach the feet of Archie Elmore.

Shrewsbury had their closest opportunity to score in the 19th minute when Elmore found himself through on goal, but good defensive teamwork by Joseph Dunne and Adejuwon Hamzat denied the equaliser. The Shrewsbury striker found himself in a similar position moments later but his pass to find Taylor Townsend was intercepted and Town were denied their equaliser yet again. James Rowland did well to prevent Fabio Tavares from doubling Rochdale’s lead as he found himself in front of Atkinson’s goal after dribbling past Jacob Bell, but the captain was able to clear the danger away from the goal.

Jack Atkinson made a great save just before the half-hour mark when Tavares managed to break away from Luke Ward, but the goalkeeper was alert and came out of his box to deny the hosts. Shrewsbury’s best chance of a goal came in the 31st minute when Jamaine Turner’s header was goal bound, but Morgan Piper made a fingertip save to knock the ball over the top of his net. A slip by Edan Sears allowed Florian Yonsian to regain possession for Rochdale and quickly found Tavares who fired the ball into the back of the net and doubled their lead. Shrewsbury’s Jack Leask gave away a penalty in the minutes that were added on at the end of the half, and Lewis Bradley calmly converted from the spot to give The Dale a 3-0 lead at the break.

Five minutes into the second half and Rochdale added their fourth of the game, but the goal was courtesy of an own goal by Luke Ward who headed the ball past substitute goalkeeper Sam Agius. Florent Hoti was in search of another Rochdale goal when he took a shot at Agius’ goal, but Luke Ward managed to make the block; conceding a corner in the process. But he was there yet again to head the ball away from the goal and out of Town danger. Shrewsbury finally found their first goal of the game in the 70th minute when Taylor Townsend did well to pick out Jamaine Turner who slotted the ball into the bottom corner to give Town a much-needed boost. There was no time to celebrate though as Ryan Grosvenor carried the ball back to the halfway line to get the game back underway.

There was a goal apiece in the space of two minutes for each side. The first came for Rochdale courtesy of Yonsian who added their fifth of the game. The second came for Shrewsbury when Lifumpa Mwandwe’s effort went straight down the middle of Piper’s goal and found the back of the net. More chances came for Shrewsbury in the remaining minutes of the game, but none of them could be converted into goals.

This was the first defeat under new manager David Longwell and they will be looking to take all three points away from Rochdale in a couple of weeks time at the Shrewsbury Sports Village.

But first, it is a home fixture against Wrexham that is next for Town on Saturday 16th March.

Tickets are now on sale for our Sky Bet League One trip to the Crown Oils Arena.

We have been allocated 611 tickets for the game, Town fans will be located in the Willbutts Lane Stand and it will be unreserved seating.

Ambulant Disabled are charged the appropriate age band rate for their ticket however, should they need a full-time carer to accompany them, the carer is admitted free of charge. Proof of carer status for middle to higher band of disability is required.

Wheelchair users are to contact Rochdale AFC Ticket Office to purchase their tickets or from the ticket office on match day.

Pay on the day will be available and there will be no price increase.

There are cash turnstiles but if the below applies then supporters will need to come to the ticket office – allocated in the main reception.

“Please Note:- The majority of matches at the Crown Oil Arena are a mixture of ticket and cash admissions.
Separate turnstiles apply to Adults, Concessions and juniors but the club recognises that some adults may wish to have their children go through the same turnstile, to accommodate this club requests that the adult purchases a ticket for their child from the ticket office.”

Tickets go off sale at 3pm on Friday 8th March. 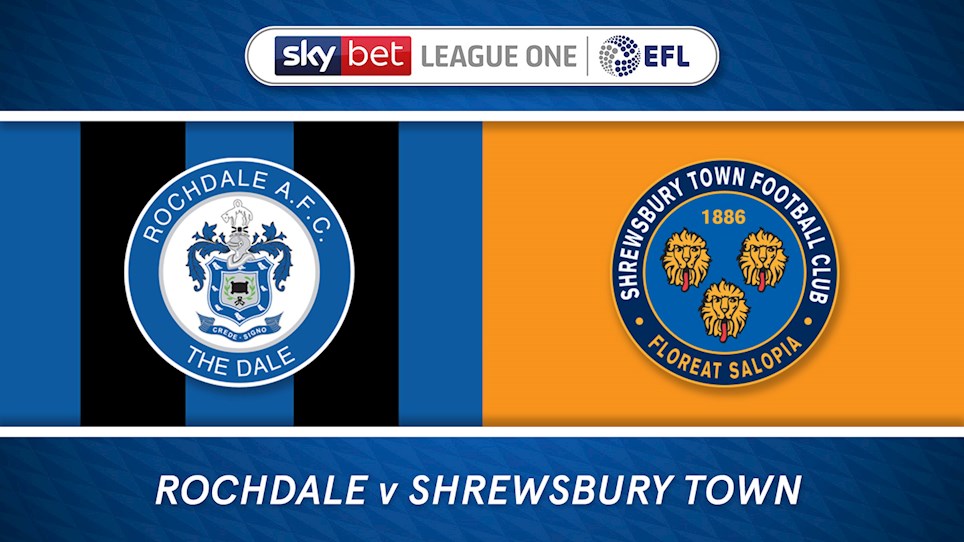