Marcus Braddock looks ahead to the weekends game

Next up in Sky Bet League One is high flying Portsmouth who occupy fourth place in the division. They've been in the top places for pretty much the whole year and are in good form as the final weeks of the season swing into view. The chances are that we're a must win game on their fixture list as they look to glean as many points at they can. Their form has obviously been good for them to be so highly placed but they did have a little dip in form from the end of January to the end of February. However, a dip for Portsmouth this season amounts to one defeat followed by five draws, so they were still picking up points. Their last five games have seen them beat Scunthorpe (2-0) and Bradford (5-1) at home and Walsall (2-3) away, beaten by Charlton (2-0) away and held 0-0 by Barnsley. So it looks like they aren't unbeatable away and although their recent defeats have been against teams in the top ten they've also been beaten at home and away in League One by Gillingham. Maybe we should do whatever they did! Pompey have also done well in the cup competitions and have a Wembley final next weekend in the CheckaTrade Trophy. Might they have half an eye on that this weekend?  Nobody wants to get injured the week before a cup final and these things sometimes have an impact but Manager Kenny Jackett has more than enough experience to counter that sort of thinking.

Pompey have the best away record in Skybet League One with ten wins on the road, over 50% of their away games so far.  That gives them an average of 1.8 points and 1.74 goals per game, both well above the league average. They also concede less than the league average with 1.3 against an average of 1.4. They score marginally more goals in the first half with 52% and their best period of the game in terms of goals scored is the last fifteen minutes of the first half with 8 scored. However, as is often the case, they have also conceded seven in that period, possibly because you're more vulnerable to counter attack when you're trying to score. Pompey's worst period of the game in terms of goals with nine conceded is the last 15 minutes, more than 50% of all their away goals in the second half.

Squad News
James Bolton, Luke Waterfall and Ro-Shaun Williams have question marks over their inclusion this weekend. Ryan Sears is on international duty with Wales U21s.

Summary
Defensive changes may dictate this one depending on who does or doesn't play and how they perform. Portsmouth are going to be difficult to beat as they march forward but putting them off their stride won’t be impossible. Last week I said it was vital to get an early goal and we won with two late goals so although it might be handy, we do know we can dig out a result. We're also against a team that's conceded a few in the last minutes of games so if we can keep things tight, we may be rewarded in the end.

Shrewsbury Town were unable to secure any points against today’s visitors Portsmouth.

Two goals from the away side was the difference between the two sides at the Montgomery Waters Meadow.

Town’s tie against Pompey started in quick fashion with both teams having a look in at goal. Town had the first chance of the game with Shaun Whalley narrowly missing a driven cross and Pompey’s Jamal Lowe seemed to be through on goal – until Steve Arnold rushed off his line to claim the ball.

Whalley had another great chance in the 16th minute, only to be denied by a great save from Craig MacGillivray. The keeper dived down well to his right-hand side to parry Whalley’s shot on to the post.

All the chances were falling Town’s way with just 24minutes on the clock. Ollie Norburn found himself through on goal but was unable to guide his shot into the back of the net due to pressure from the Pompey keeper.

Arnold was called into action just before the half an hour mark. Gareth Evans got on the end of Lowe’s cross but Town’s shot stopper managed to get two strong hands on the ball to keep out the powerful shot.

Pompey managed to take one of their few chances in the latter stages of the half. The ball pinged around in the box but a lucky bounce saw the ball to Ben Close and the midfielder powerfully struck the ball into the back of the net.

The half came to an end with the visitors taking a one-goal advantage into the break. Both sides enjoyed a competitive end-to-end half, but Pompey managed to convert a chance and take the lead.

Town came out of the starting blocks fast and looked to get back on level terms immediately. Greg Docherty did well just inside the Pompey box to fire off a shot but MaGillivray did well to push the ball away.

Town were awarded a free kick just outside the box in the 50th minute after Whalley was pushed over. Fejiri Okenabirhie took the resulting free kick but the striker couldn’t beat the wall.

Omar Bogle was given a yellow card for clashing with Scott Golbounrne in the 52nd minute.

Just three minutes later Tom Naylor was also given a yellow card for a poor challenge on Anthony Grant.

Town were pushing hard to find a goal and were the only side creating chances. Whalley and Ollie Norburn were all doing well and were looking to force their side back onto level terms.

Close was given a yellow card in the 68th minute for a foul on Norburn in the middle of the park.

Town were pushing forward and were nearly caught out by a Pompey counter attack. The visitors played in a nice cross and Ollie Hawkins managed to head towards goal.  Arnold however denied Pompey a second goal with a great reaction save.

Christian Burgess was added to the referee’s book in the 76th minute for tripping Whalley on the edge of the box. Norburn stood up to take the free kick but couldn’t beat the away side’s keeper with his driven cross.

Pompey managed to secure anther goal due to a defensive mistake by Town. Arnold kicked the ball against Omar Beckles and the visitors managed to latch onto the ball and fire in a cross. Brett Pitman met the pass and he fired home from six yards out.

The game came to an end with Town unable to force themselves back into the tie.

The draw of the Postcode Ticket Giveaway has taken place and the winning postcode is ST20 0LX.

For every Sky Bet League One game this season we are picking one season ticket at random and then giving away tickets to everyone in their postcode.

So far over 250 tickets have been given away since the start of the season with people getting the chance to take in a Town home game for free.

If you are in ST20 0LX then keep an eye on your letterbox for your free ticket vouchers. 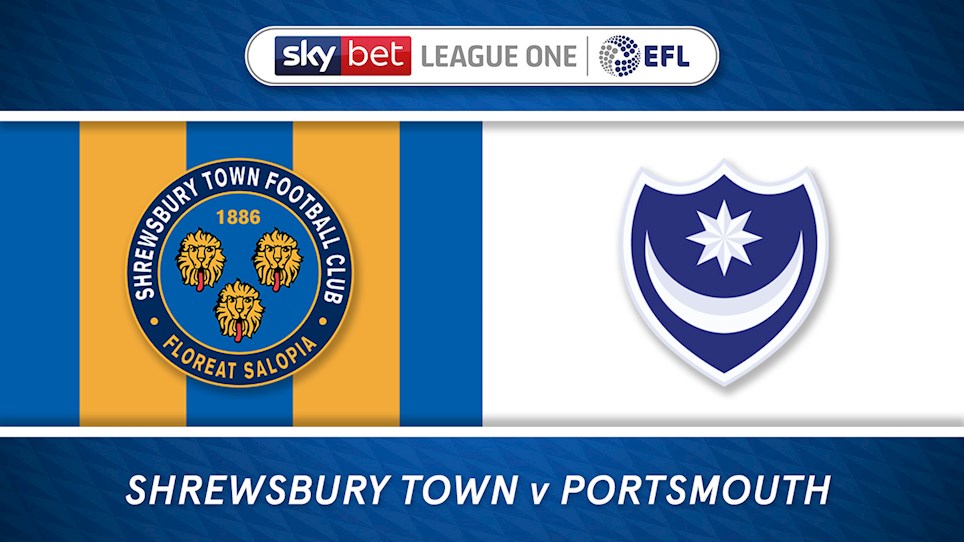