This weekend Shrewsbury Town welcome thirteenth placed Wycombe Wanderers to Montgomery Waters Meadow in Sky Bet League One. The difference between Town and Wycombe is seven places but only four points with just nine points separating the bottom thirteen teams. With games running out, neither Shrewsbury or Wycombe are mathematically certain of League One survival next season so three points this weekend could make all the difference. Neither team has great form but Wanderers haven't won since January when they beat Plymouth at home and have lost six times in the nine games since.

Five at home and none away from home.

With just three away wins all season, the Chairboys have averaged .8 points per away game and have lost half of their away games. They've scored an average of 1.2 goals but have conceded close to 1.9 away from Adams Park.

They've conceded 34 goals away from home with 41% occurring in the first half and 59% in the second. They've scored 22 away goals which were coincidentally split in exactly the proportion, 41% to 59% in the second half.

James Bolton remains a doubt still with an ankle injury.

We're getting toward the end of the season and the games are running out so we really need to find the form we showed against Doncaster and Peterborough. I honestly think there is more than enough quality in this squad to stay up but confidence seems a little changeable depending on how we're doing so we need a good start. We also need to hold it together defensively, again, we're more than capable of that with eleven clean sheets in League One this season, that's just under a third. We just need to find the form that saw us go five games unbeaten recently.

Despite going a goal down, Town managed to pull level late on and went on to secure the win with a penalty.

The Shrews started the game positively and were moving the ball well in the opposing half. Shaun Whalley was constantly giving his opposite man a challenge down the right-hand side.

Paris Cowan-Hall had a chance to put the visitors in the lead in the 26th minute. The forward got on the end of a driven cross at the far post, but the angle was too tight and Steve Arnold shut the door and calmly collected the ball.

The first thirty minutes had limited goalmouth action as the wind was causing problems for both sides. Town and the visitors couldn’t get a hold of the ball for long enough to mount a serious attack.

The wind came into play just two minutes after Wycombe’s first chance. A lofted ball looped towards the six-yard box, which saw Alex Samuel make a good connection with the ball. Arnold reacted instantly and was able to tip the ball over the bar.

Referee Trevor Kettle gave Scott Golbourne a yellow card in the 49th minute. The defender looked to have got the ball with his tackle but the referee decided otherwise.

Arnold had to make another important save during injury time. Wycombe number five Anthony Stewart rose well to head a powerful shot towards goal but Arnold was equal to the shot and parried the ball away.

The half came to an end with the two teams remaining level on the score sheet. Both teams had a small number of chances and positive spells during the half, whilst battling the wind, but neither side could snatch a goal.

The second-half began in the same fashion as the first had ended – with both teams battling for the ball and looking to create openings. Neither team were finding opportunities easily but kept on pushing for a chance.

Wycombe were given a good chance in the 67th minute due to a foul on the edge of the box, as Omar Beckles fouled Alex Samuel. Jason McCarthy struck the ball and managed to find the top corner of the goal – giving his side the lead.

Town went close with their own chance in the 71st minute. Whalley managed to whip in a great cross towards Tyrese Campbell, but the striker slightly miss-timed his header and the keeper was easily able to deal with the effort.

Just a minute later Josh Laurent had his own half-chance whilst under pressure from Adam El-Abd. The midfielder got on the end of a driven cross but couldn’t keep his show below the bar.

Ollie Norburn was booked in the 76th minute for a late challenge in the middle of the park.

Joe Jacobson was also put into the referee’s book for fouling Whalley on the right wing.

Omar Beckles managed to pull Town back on level terms in the latter stages of the half. Greg Docherty floated in a ball and Beckles jumped well to head the ball in the opposite corner to level the score line.

Town were awarded a penalty during injury time as Whalley was fouled just inside the box. Norburn stepped up to take the penalty and sent the keeper the wrong way to put Town in the lead.

The draw of the Postcode Ticket Giveaway has taken place and the winning postcode is TF1 1NP.

For every Sky Bet League One game this season we are picking one season ticket at random and then giving away tickets to everyone in their postcode.

So far over 200 tickets have been given away since the start of the season with people getting the chance to take in a Town home game for free.

If you are in TF1 1NP then keep an eye on your letterbox for your free ticket vouchers. 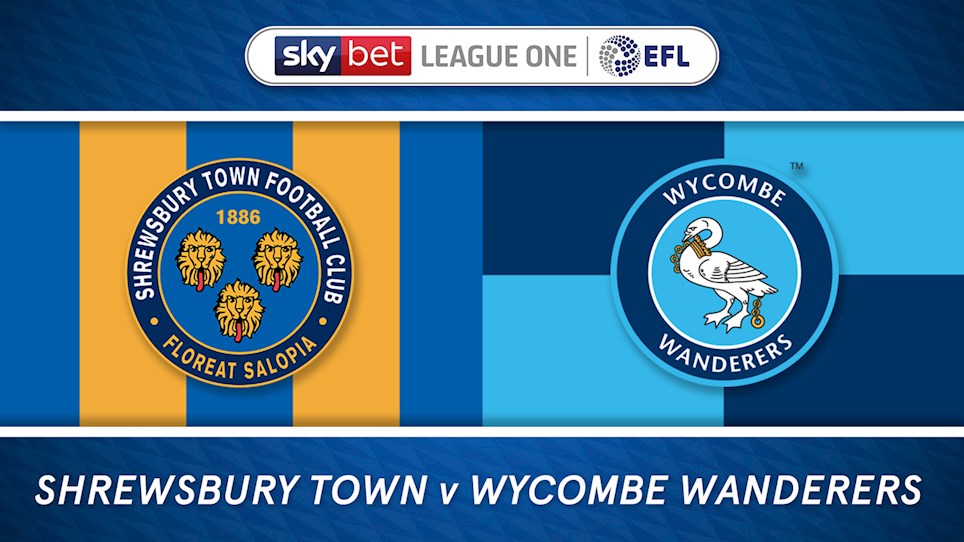