Marcus Braddock looks ahead to Saturday's trip to Southend

This weekend Shrewsbury Town travel all the way down south to Essex to face Southend United. The Shrimpers have found life difficult in League One this season, particularly since mid January, which was when, they last won in League One. You have to go back to New Years Day to find Southend's last home win, a 2-0 win against Kent rivals Gillingham. This week, manager Chris Powell and Southend parted company with their form being the obvious reason, Ricky Duncan, the head of the Southend Academy, has taken temporary charge.

Clean Sheets
Eleven, seven at home. Last clean sheet at home in League one was on Jan 1st 2019, a 2-0 win against Gillingham.

Southend have scored an average of 1.4 goals per home game and have conceded the exact same amount. That's given them an average of 1 point per game against a Skybet League One average of around 1.5.

Southend are keeping an eye on top scorer Simon Cox after an ankle injury last week although the player says he feels fit. Tom Hopper and Stephen Humphrys will miss out, as will Winger Stephen McLaughlin will also not feature.

Steve Arnold will miss out after picking up a hamstring injury last weekend which is set to see him missing for 4 to 5 weeks.

Why is it that teams that are struggling always seem to remove their manager before they play us? I'm sure that statistically I'm wrong but we do seem to play a fair few teams every season that have removed their manager and are playing with a new freedom, it even happened to us earlier this season. Whoever is in charge will be doing their best to test our weaknesses and arrest their slide down the table so we'll need to be at our best and also take the opportunities when they arise.

Town’s afternoon on the road ended with the Shrews taking three points back to Shropshire.

Fejiri Okenabirhie and Luke Waterfall were the pair on hand to score second-half goals to earn Town the win.

Team News: Sam Ricketts made one forced change to his starting 11, with Jonathan Mitchell replacing Steve Arnold in the net. Arnold was absent from the squad due to injury.

An open and evenly contested first 10 minutes is what faced Sam Ricketts and his team at Southend’s Roots Hall. Both teams were looking to be offensive and both tried to impose themselves on the game.

The Shrimpers had a penalty claim just after the 15-minute mark as Dru Yearwood fell to the ground in the Town box amid pressure from Ro-Shaun Williams, but the referee waved away the claim.

Space was opening up for both teams all around the pitch, which lead to both teams’ defences being stretched. Despite the space, neither team were able to find that killer pass into the box to create any real danger.

The next real opportunity for Town fell with just 10 minutes to go in the half. Ollie Norburn was pulled down around 30-yards out. Shaun Whalley floated in the free-kick but Luke Waterfall was unable to find the target with his headed effort.

Town were pushing forward at any given chance but were finding it difficult to break down the home sides’ back four. Norburn had a chance late on but saw his driven effort flash wide.

The half came to an end with no goals on the score sheet. Both teams were working hard to retain possession and create chances.

Town’s second-half started in the best way possible, with Fejiri Okenabirhie netting for the Shrews. The striker capitalised on a defensive mistake, ran towards goal and slotted home via the post across the goalkeeper – giving his team the lead in the 50th minute.

Williams was given a yellow card 54th minute for stalling a Southend throw-in.

Okenabirhie came inches away from doubling his, and Town’s tally in the 62nd minute. After Greg Docherty created a well-worked opening, the midfielder found Okenabirhie in the box but the striker’s shot flicked off the defender and onto the post.

Town were pilling on the pressure as the minutes went on. Despite getting the first goal, Town looked eager to double the lead and continued to fire balls into the box.

That next goal came in the 70th minute through Waterfall. James Bolton swung in a great cross and Waterfall leaped above the Southend defence to head home at the back post – giving Town a two-goal advantage.

The referee brandished a yellow card in the direction of Luke Hyam and Whalley as the two had an altercation in the Shrimpers box.

Town were very much the team in the ascendancy as the clock ran down towards the final 10 minutes. However, Jonathan Mitchell was called into action and had to make his first real save in the 81st minute.  The keeper had to get two strong hands to Simon Cox’s powerful shot.

Town managed to secure all three points at the Shrimpers’ Roots Hall with a 0-2 victory.

Tickets are now on sale for our Sky Bet League One trip to the Roots Hall.

We have been allocated 500 tickets for the game and Town fans will be housed in the North Stand which is unreserved covers seating.

** Please note the Emergency Services price is NOT available on matchday for home or away fans so need to be purchased in advance.

Tickets go off sale at 3pm on Friday 29th March. 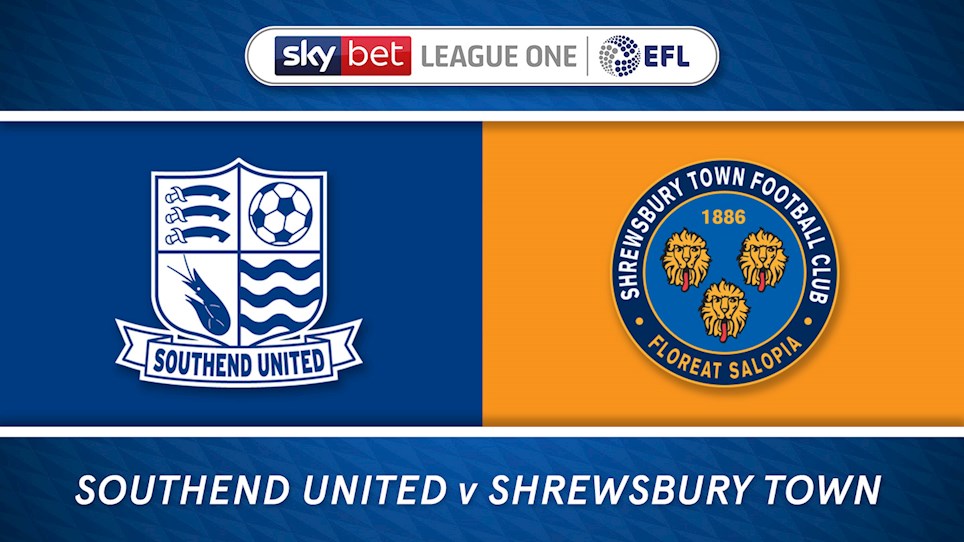