This week has seen all sorts of speculation in the local press and amongst the fan-base about our form and some of our recent performances. I'm not going to add to that, but the form of our opponents has because Wimbledon have the second worse home record in League One with just one win and one draw in eight games at The Cherry Red Records Stadium. That ratchets the pressure up for Town as we are the worst performing away team in the division with just three points from draws against Doncaster, Portsmouth and Walsall. Wimbledon last won on September 29th when they beat a similar Oxford team to the one that beat us last weekend so that might instil a little confidence in the home team although the fact that they've scored just once in their three games since may not.

One at home and three from away games. Last clean sheet: September 8th, Gillingham 0-1 Wimbledon.

Wimbledon have conceded 7 goals in each half of home games this season.

The 15 minutes before half time have been the most prolific for away teams with four conceded.

The Dons have scored three goals in the first half of home games this season and four in the second half.

Wimbledon boss Neal Ardley has had good news this week with the return of Andy Barcham and Anthony Wordsworth to boost his forward options. Tyler Garrett has also returned to training this week but  fellow defender Will Nightingale is unlikely to feature.

Although our away record doesn't make great reading, there is some firm evidence that we can travel and play well. The three teams we've drawn against are all in the top ten and on each occasion we were unlucky not to come home with a little more. Wimbledon can point toward their home win against Oxford in their last five games to give them hope but I wonder if a draw might be the most likely result this weekend with both teams playing cautiously to avoid defeat.

Town earn all three points on the road with a 1-2 win over AFC Wimbledon.

Intro: Town earned their first away win of the season with a 1-2 win over AFC Wimbledon.

Luke Waterfall scored two goals to give his side all three points on the road.

John Askey made four changes to his line up to face AFC Wimbledon this afternoon. Steve Arnold, Mat Sadler, Alex Gilliead and Aaron Amadi-Holloway were all introduced into the starting 11. Still involved in the match-day squad and starting on the bench were: Joel Coleman, James Bolton and Lee Angol.

The first 10 minutes of the half turned out to be a tight contest, with both teams working hard to retain the ball. The home side looked strong in possession, but Town were more than matching the Dons.

The home side had the better chance in the early stages and went close to taking the lead in the 25th minute. Scott Wagstaff flashed a ball across goal, but no Dons player could poke the ball into the net.

Terell Thomas was the next player to have a clear chance at goal. In the 33rd minute Wimbledon’s number six, Terell Thomas, latched onto the end of a driven cross, but the defender wasn’t able to guide his shot on target.

Just a minute later the home side broke the deadlock. Mitch Pinnock put in a great corner, which found its way to the back post and Dons frontman James Hanson leaped well to head home the ball from a yard out.

The first-half came to an end with the home side going into the break with a one-goal advantage. James Hanson managed to put the Dons in the lead after 33 minutes.

The best chance of the second-half didn’t come until 10 minutes had passed. A nice pass found Fejiri Okenabirhie just inside the box and Town’s forward did well to beat his man and let off a shot. However, Joe McDonnell did well to get two strong hands to the ball to parry it away.

Town managed to break even in the 59th minute. Greg Docherty put in a corner, which was met by Amadi-Holloway. The forward knocked the ball back into the danger zone, and after a goalmouth scramble, Luke Waterfall managed to stab home the ball to level the score for Askey’s men.

Town were very much the side looking more dangerous as the half progressed. Half-time sub Josh Laurent did well to put pressure on the home side’s goalkeeper. The midfielder beat his man and let off a powerful shot, but the keeper matched his effort and claimed the ball.

Docherty came inches away from giving Town the lead 74th minute - with a long-range effort. The ball fell to the midfielder outside of the box, but his effort narrowly missed the target.

Town secured another goal through Luke Waterfall in the 90th minute. Greg Docherty floated in a lovely ball and Waterfall jumped well to guide the ball into the corner of the goal - putting Town in the lead late on.

The game to an end with the final score 1-2, which saw Town win all three points on the road.

Tickets are now off sale for our Sky Bet League One trip to AFC Wimbledon.

We have sold 286 for the trip to the Cherry Red Records Stadium and Town fans will be able to purchase tickets on the day.

Ambulant disabled fans pay the appropriate price for their age group and their carer is free of charge.

Checks are in place on the day of the game and anyone who has purchased an age-related ticket will be asked for proof before entering the ground. 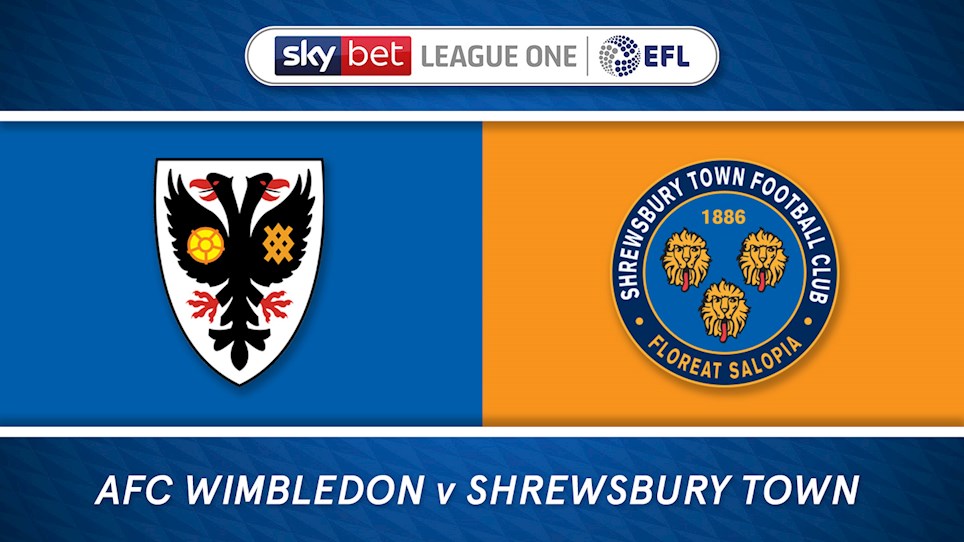