Town earn all three points with a 2-0 win over Plymouth Argyle.

Town managed an instant return to winning ways with a win over Plymouth Argyle.

Fejiri Okenabirhie and Greg Docherty were the pair who notched the goals to give Town all three points.

Team News: Danny Coyne made one change to his starting line up to face Argyle. James Bolton was brought into the starting 11 as Josh Emmanuel departed the match-day squad.

The first 15 minutes of the contest consisted of both sides trying to figure out the opposition. Both teams were having bright moments going forward but nothing to trouble each goalkeeper.

Town sprung into life just after the 20-minute mark and had the visitors defending their goal. Town looked to have taken control of the last five minutes and were the side looking most dangerous going forward.

Greg Docherty came inches away from giving Town the lead in the 30th minute. The midfielder picked up the ball just on the edge of the box, but saw his powerful effort drift just wide of the post.

Docherty didn’t let his previous missed effort deter him from shooting from distance.  Ollie Norburn picked out the Scotsman on the edge of the box and Docherty curled a great effort into the far corner of the goal – giving Town the lead in the 34th minute.

Steve Arnold was called into action shortly after Town’s goal. Luke Waterfall made a good block on the ball close to his net, but Arnold had to make a great reaction save to parry the ball away from his line – preserving Town’s one goal advantage.

Plymouth’s David Fox was given a yellow card in the 40th minute for impeding Docherty as the midfielder looked to counter-attack.

Town were very much the team in the ascendancy as the half drew to a close and were creating the majority of the first period’s chances. That’s how the first-half action would end, with Town going into the break with a one -goal advantage.

The second-half started in slow fashion with both teams not creating much. The battle was being played out in the middle of the park with both teams looking to retain possession.

Town were still looking to break forward given the chance, but the visitors were doing a good job of restricting Town to long-range efforts.

Town’s persistence paid off and Coyne’s men managed to find an opening in the 68th minute. Aaron Amadi-Holloway played a defence-splitting pass, which saw Okenabirhie through on goal. The forward needed no second invitation and slotted home the ball across goal into the corner.

Town were looking more and more threatening as the half progressed. Docherty came very close to doubling his tally after a quick counter-attack. The midfielder did well to beat his man on the right side, but his shot from just inside of the box grazed the top of the bar.

The visitors had positive spells of possession but nothing that would trouble Town’s keeper. The back four were being tested but remained resolute and pushed away any pressure.

Former Town man Joe Riley was given a yellow card in the 87th minute for tripping Gilliead as he looked to break on the counter-attack.

The game came to an end with Town earning all three deserved points, with goals from Okenabirhie and Docherty.

Tickets are now on sale for our home game with Plymouth Argyle.

The game is Orange Tuesday with the team playing in the Shropshire Homes Orange away shirt for this game.  Season Ticket holders can bring a friend to the game for just £5 when you buy your tickets at the ticket office.  The Orange away shirt is also on special offer at the clubshop. 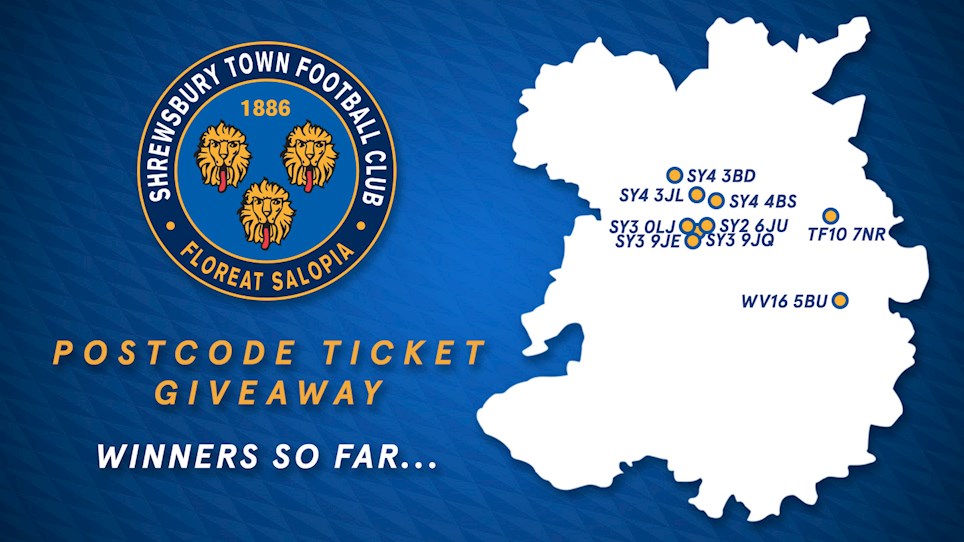 SY4 3JL Is The Lucky Postcode