Marcus Braddock looks ahead to Saturday's trip to Adams Park

This weekend Shrewsbury Town head to Buckinghamshire to face Wycombe Wanderers. The Chairboys are similar to us in that we've both had a recent improvement of form with Wycombe winning three and drawing one of their last five league games.  It took Wanderers until October to record a home win in League One but when they did they won four on the bounce. The last two of those games were won with clean sheets against Rochdale  (3-0) and Peterborough (1-0) and although they lost their last home game to Oxford in the CheckaTrade Football League Trophy, it was quite a changed team.

Played for Both Sides

Town haven’t given Bryn Morris permission for this one, which is just as well as he's one of Wanderers top scorers with three goals in league games. Joe Jacobson and Adam El-Abd are both ex-Shrews with Joe Jacobson helping us to get promoted in 2011/12. He left for Wycombe at the end of the following season with well over 100 appearances under his belt. El-Abd played 34 times for us in the 2016/17 season, helping us to stay clear of the relegation places.

Four, all from home games.

The Chairboys have not conceded in the final 15 minutes of any home game this season.

The last fifteen minutes of games are also the most productive for Wycombe with four goals scored.

Wycombe have scored 62% of their home goals in the second half.

Wycombe: David Stockdale has been drafted in as an emergency loan after previous emergency loan keeper; Queens Park Rangers' Matt Ingram had to return to his parent club. Striker Nathan Tyson is fit and may feature. Decisions will be made on the fitness of Matt Bloomfield, Adebayo Akinfenwa, Michael Harriman and Darius Charles closer to kick off. Bryn Morris will be unavailable for Wycombe.

Wycombe come into this game after a draw at Sunderland and on the back of some very decent home form. They look to be a hard working team and with the goals pretty evenly spread amongst a few players, there isn't one main threat to counter. We'll need to match their work-rate if we're to get anything but we should go into the game with a little more confidence having won our last three away games in all competitions.

This game is part of the EFL's support of Stonewall's Rainbow Laces campaign. The corner flags will be decorated with rainbow colours, as will both captains’ armbands.

Shrewsbury Town lose out 3-2 on the road against Wycombe Wanderers.

Shrewsbury Town were unable to keep the winning run going, losing out to Wycombe Wanderers 3-2.

Team News: Danny Coyne names an un-changed and un-beaten side from Town’s last fixture with Salford City in the FA Cup.

Wycombe looked like the team who wanted to start fast and take it to Town immediately, but Town did well to absorb pressure, which resulted in Town being able to counter-attack. Coyne’s men took full advantage just a few minutes later with Aaron Amadi-Holloway heading home the ball from Fejiri Okenabirhie’s good delivery.

It took only six minutes for the home side to have a clear chance at the Town goal. Luke Waterfall’s attempted clearance was blocked and thrown back into the box. Former Shrews man Adam El-Abd controlled the ball well and slotted the ball into the corner of the goal – brining the scores level.

El-Abd was given a yellow card by referee Andy Haines for a foul on Okenabirhie as the forward looking to run down the wing.

Despite the fast start to the game, neither team were having clear-cut chances during the next 20 minutes. Town and the home side were doing well to limit the opposition to long-range efforts.

In the 40th minute Wycombe took the lead due to a terrific effort from Chairboys number three Joe Jacobson. The left-back fired his effort from outside the box and the ball nestled in the very corner of the goal – giving Steve Arnold no chance.

Town didn’t let that goal stop them from attacking the home side at any given chance. Waterfall came inches away from getting an almost immediate equaliser with a headed effort – only to see the ball crash off the post.

The home side went into the break up on the score sheet after an impressive 35-yard effort from Joe Jacobson took the lead for the Chairboys.

The second-half started polar opposite to how the first had begun. The return to the pitch didn’t weald any goalmouth action after 10 minutes with both teams cancelling each other out in the middle of the park.

The battle between the two sides was beginning to be dominated in the middle of the pitch. The home side were looking to retain possession but Town were constantly looking to progress forward to no avail.

The home side extended their lead in the 71st minute through Alex Samuel. The forward picked up the ball just inside the box and let off a driven shot, which zipped across the grass into the back of the net.

A counter-attacking move just a minute later saw Town grab a goal back. Norburn did well to hold onto the ball, which allowed the midfielder to place a through ball into the path of Okenabirhie. Town’s forward drove into the box and let off a powerful shot across goal, which went in via the side netting – bringing the score to 3-2.

The game drew to a close with the home side looking to minimalize Town’s opportunities going forward. The Chairboys were doing well to pin the ball in Town’s half.

The game came to an end with the home side clinching the three points.

Tickets are now on sale for our Sky Bet League One trip to Adams Park to take on Wycombe Wanders.

We have been allocated an initial 400 tickets for the Lords Builders Merchant Stand and this will be unreserved seating.

Please note that all prices go up by £2 on the day.

Ambulant disabled tickets are charged at the relevant price category and can be booked through the club (wheelchair users must contact the WWFC Ticket Office).  Please note that a disabled person is only entitled to a free carer’s ticket if they are of medium rate disability or above, proof must be provided.

Tickets go off sale at 3pm on Friday 23rd of November. 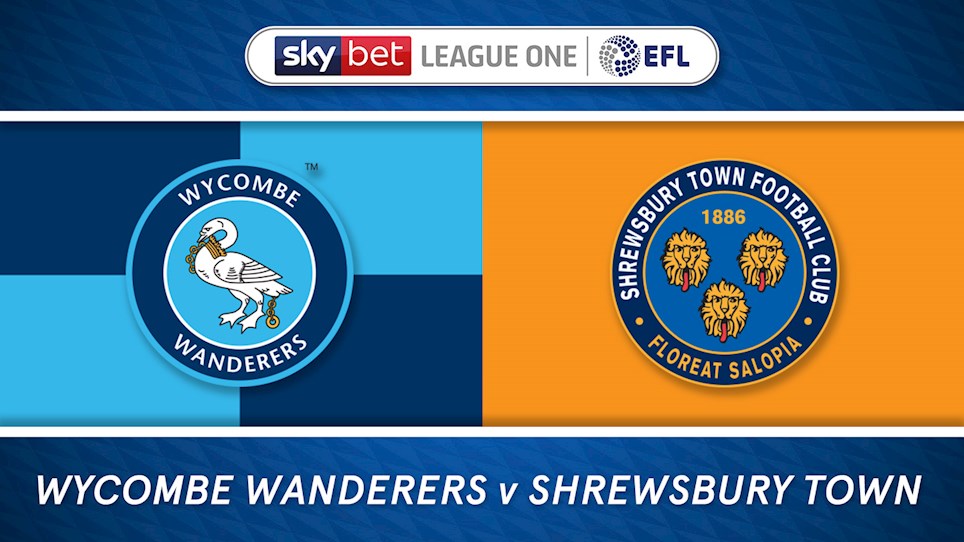