Tonight at 7pm we face Tranmere Rovers in the Checkatrade Trophy group stages. Tranmere are currently in 7th position in League Two after promotion from the Conference last season. They've only lost twice in the league this season and are unbeaten in their last three games with the two most recent games resulting in a home win against Lincoln and a 4-3 away win at Morecambe. Their previous fixture in this competition was at home to Crewe but they lost that 4-3.

Both Micky Mellon and John Askey may look to use this game as an opportunity for fringe players.

This certainly is an interesting game against a manager who left this stadium a couple of years ago after having done a great job in getting us up and keeping us. He also brought Manchester United to us for the first time in our history and Chelsea who we pushed pretty much all the way to the 90th minute. Another of his feats was to give us our first cup victory against top flight opponents in an away fixture when his League Two winning team unceremoniously dumped Leicester City out of the League Cup. He's one of the few managers who left this club with his head held high with Shrewsbury Town in a much better position than when he arrived. That includes bringing in some of last seasons best players like Abu Ogogo Shaun Whalley and Mat Sadler!

So I'm thankful for what Micky did but that has to go by the wayside when tonight's game begins. He brings with him Larnell Cole and Mark Ellis who both played under Micky for Shrewsbury Town. Hopefully, all will receive a warm round of applause for their efforts. 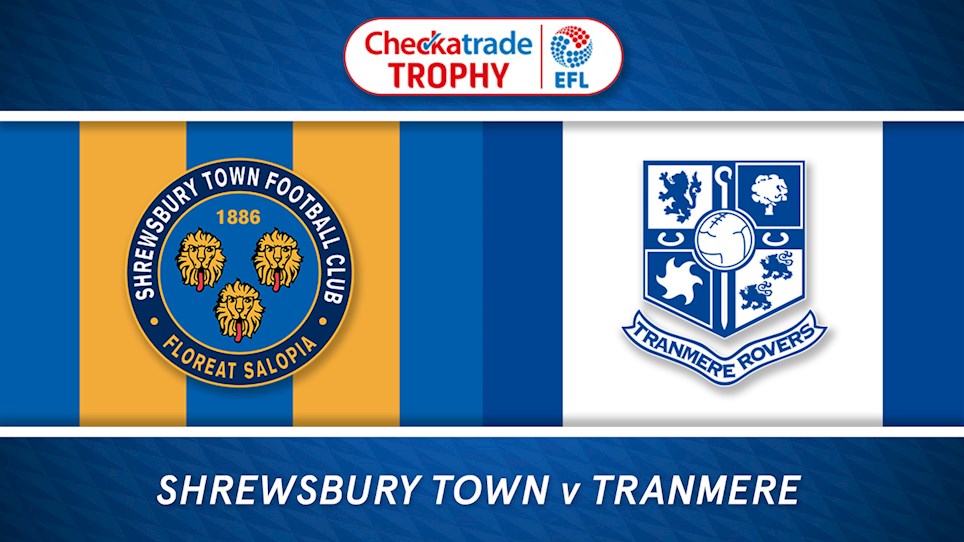 
Details of the Checkatrade Trophy home game against Tranmere Rovers

Town earn a win against Tranmere Rovers in the Checkatrade Trophy.

Shrewsbury Town earn another win, this time out in the Checkatrade trophy with a six-goal advantage.

The first 10 minutes of the half turned out to be a cagey affair, until Lenell John-Lewis found the net from just inside the box.  Greg Docherty picked up the ball in the middle of the park, dribbled past two Tranmere defenders before finding John-Lewis and the striker took his chance, slotting the ball into the bottom left-hand corner of the goal.

Town doubled the lead just six minutes later in 17th minute. This time around John-Lewis found Docherty with a neat pass near the edge of the box. Docherty still had work to do, but Town’s number eight did well to shift past his man and dispatch a powerful shot, that nestled into the top right corner of the goal.

The Tranmere keeper’s night went from bad to worse in the 22nd minute. The shot-stopper miss-judged Docherty’s free kick delivery and fumbled the ball near the six-yard box. Omar Beckles pounced on the loose ball from a yard out to poke home the ball, making the score three nil

Town were continuing to dominate the play as the half was reaching the latter stages. The Shrews defence was doing a solid job to seal out Tranmere’s front men. Going forward, Docherty was troubling the Rovers back line at any given chance.

A proactive half came to an end and saw John Askey’s men go into the half-time break with a healthy three-goal advantage over the visitors.

Beckles was given a yellow card in the 52nd minute for a deliberate handball near the middle of the park.

A costly mistake from Harvey Gilmour allowed Town an opportunity at goal just 10 minutes into the half. Fejiri Okenabirhie latched onto a misplaced pass and the forward struck a low and powerful shot from outside of the box, which found its way into the bottom corner of the goal.

Tranmere’s Mark Ellis was given a yellow card in the 66th minute for a rash challenge on Okenabirhie.

Unlike the first half, the second period was a much tighter affair, with both teams looking more even in the middle of the park.  Although, Town’s central midfielders were doing well to frustrate the opposition and stifle any sparks of an attack.

Okenabirhie got his second goal of the game in the 73rd minute. Docherty did well to find Okenabirhie on the edge of the box and Town’s front man let off a curling effort, which found the back of the net after the ball slipped from Wharton’s hands, making the score-line 5-0.

As the game was closing out only Town looked like the team who were going to score. Town’s desire had not faltered all the way through the game and Askey’s men were still putting pressure on the visitors, despite the score line.

Right on the stroke of full-time, Town scored and Okenabirhie grabbed his hat trick. The forward latched onto a pass and ferociously struck the ball into the bottom right-hand corner from just inside the box.

The game ended with a 6-0 score line as Town earn a win in the Checkatrade trophy.


Details of the Checkatrade Trophy home game against Tranmere Rovers

Shrewsbury Town are pleased to confirm the prices for the Checkatrade Trophy group game against Tranmere Rovers.

The game takes place on Tuesday 9th October with a 7pm kick-off at the Montgomery Waters Meadow.

As per last season, for group matches only the Roland Wycherley East Stand and DM Recruitment North Stand will be open for these games.

Due to ongoing discussions with TicketMaster the 'Add To Fancard' option has been removed.  Any FanCard or Season Ticket holder who purchases a ticket will have a physical ticket printed for them, or you can use the print at home option.