Marcus Braddock looks ahead to this evenings trip to Walsal

Tonight, Shrewsbury Town take on Walsall in our eleventh game so far in League One. Walsall sit 12 places above us in seventh place with eighteen points from five wins, three draws and two defeats. At the weekend, The Saddlers were beaten 1-0 at home by Accrington, their second home defeat in a row after Doncaster won 4-1 at Banks's Stadium two weeks earlier.

Walsall have three top scorers in League One, all of whom have three goals in League One. Andy Cook scored his three in seven starts and three substitute appearances. The 27-year-old striker arrived at Banks's in the summer after scoring 49 times in 64 starts and 14 substitute appearances for Tranmere. Cook also scored in the second round of the League cup against Macclesfield Town.

Morgan Ferrier also arrived in Walsall this summer from Boreham Wood where the forward had a record of scoring in every other game. The 23 year old has also scored once in the League Cup although his was in the first round in the 3-1 away win at Tranmere.

Midfielder Zeli Ismail also has three goals and one in the League Cup and like Ferrier, he scored in the 3-1 win at Tranmere. The 24 year old started his career with nearby Wolverhampton Wanderers but only played a handful of games for them. He has plenty of experience gained on loan from Wolves, playing for seven clubs whilst under contract there.

1 at home to Blackpool in there 0-0 draw on September 1st.

The Saddlers stats are quite interesting, as they seem to mirror each other in places. Walsall have scored an average of 1.4 points at home and have won 40% of their games at home, beating the league averages of 1.33 and 34% respectively.  However, they've also lost 40% of their home games and have also conceded 1.4 goals per game, both of which are both over the League One average of 1.32 and 34%.

Neither team have any new injury concerns.

Walsall is one of those games that carry a little extra meaning to supporters because it's a bit of a derby. Historically it's been a difficult place for us to get anything, the last time we won there in the league was in December 1993. So a win for us would be a bit of a surprise from that perspective and looking at our differing records so far, a draw would seem like a good result. However, the Saddlers don't have the greatest home form and we need to put the weekend’s disappointment behind us.

Town earn a point on the road against Walsall

Shrewsbury Town earned a point on the road at the Banks’s stadium.

An end-to-end fixture looked set to create goals, but neither team could claim all three points.

Team News: John Askey makes one change to his starting line-up that faced Gillingham last week. Greg Docherty starts on the bench and is replaced in the starting 11 by Alex Gilliead.

The first 10 minutes of the game started as everyone expected -with both teams battling hard for the ball. Despite starting well, the best chance of the game fell to the home side. Zeli Ismail struck a fine ball towards goal from a free kick, but Joel Coleman was equal to it and made a great save to deny the winger.

A great counter-attacking move from Alex Gilliead nearly ended with a Town goal. The winger ran at the Saddlers back four and slipped the ball to Shaun Whalley on the edge of the box. Town’s other winger beat his man but narrowly missed the target with a curling effort.

Ollie Norburn was inches away from catching out the Walsall goalkeeper, Liam Roberts, with a long-range effort. The central-midfielder found a pocket of space on the edge of the box and let off a powerful shot, but Roberts got down well to parry the ball away.

Ismail had a golden opportunity to put the Saddlers in the lead in the 27th minute. The winger latched onto a great cross, but Ismail skied the ball from three yards.

Anthony Grant came to Town’s rescue just two minutes after Walsall’s previous chance with a goal-line clearance. Josh Ginnelly did well to beat Coleman with a powerful shot, but Grant did equally well to clear the ball of the line for Town.

The game settled down and was starting to be come a more tight affair as the half was drawing to a close. Neither team were having clear-cut chances in the backstretch.

Right on the stroke of half-time Town had a chance to take the lead. Whalley delivered in a cross from a free kick, which resulted in a Town corner. A Walsall head met Whaley’s delivery and the half-time whistle went.

Both teams went into the break having had good spells during the half, but neither team could get the ball over the line to take the lead.

The second-half started identically to the first. Town and the Saddlers were battling ferociously to retain possession in the middle of the park.

The ever-present Shaun Whalley came close to putting Town in the lead with a half volley within five minutes of the half starting. The winger struck the ball from just inside the box, but Jon Guthrie did well to block the ball.

Ginnelly was given a yellow card in the 57th minute for a late challenge on Grant just outside of the box.

A great save from Coleman kept the score level in the 65th minute. Ginnelly broke through the Shrews back four and was one-on-one with Town’s keeper. Coleman stood strong and parried the ball away.

Clear goal-scoring chances were hard to come by as the game was reaching the latter stages. Both teams were doing well to trouble each other’s back four, but neither side could muster up a shot at goal.

George Dobson came close for the Saddlers five minutes before time. The Saddlers captain let off a long-range effort that whispered just over the bar.

End to end would have described the fixture perfectly. Up the other end of the pitch Norburn almost nicked the lead for Town in the 90th minute. Whalley slipped Norburn through, but Roberts made a great save to deny the midfielder from a tight angle.

The game came to an end with the scores as they started. An end-to-end game didn’t create any chances and the points were shared.

Tickets are now on sale for our away game with Walsall.

We have been allocated an inital 1,000 tickets for the game.

Ticket price when purchased in advance.

These are not available online and can only be purchased via the Ticket Office.

Only full price individual tickets are available on the website.

Should tickets be available on the day, Family Tickets will need to be purchased  at the Ticket Office window with all other available tickets to purchase on a cash only turnstile.

Prices increase by £2 on match day.

Ambulant/Wheelchair disabled ticket prices are relevant to prices categories above with a carer free of charge.

There is an ‘Away Fans Bar’ which opens at the Banks’s Stadium ahead of the game.

Tickets go off sale at 2pm on Tuesday 2nd of October. 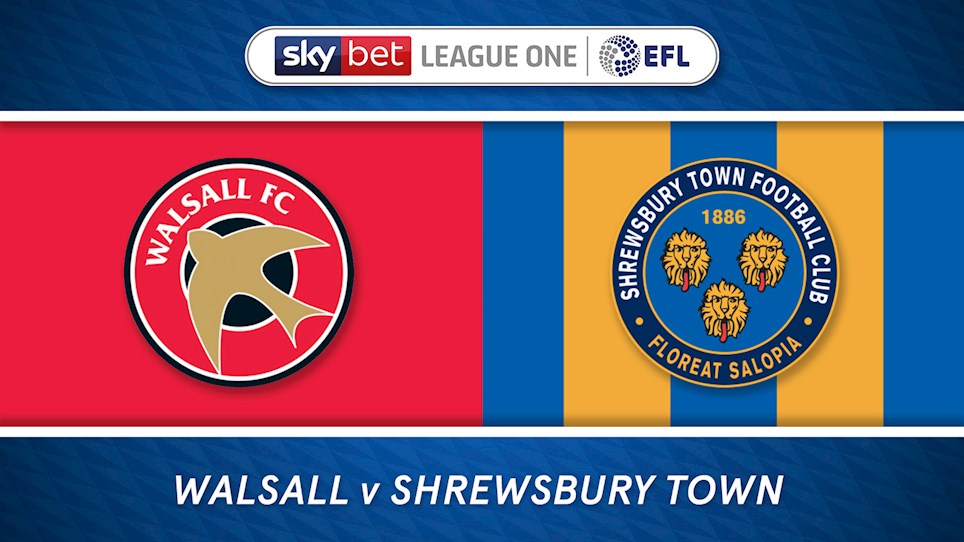