This weekend, Shrewsbury Town have one of the longer journeys in League One this season when they travel Portsmouth. Pompey sit in second place in League One having won five games and drawn once, giving them sixteen points and a +9 goal difference.

Although Pompey have the better record in the games we have played, we've had the best of things in recent years with five wins in our last five games. Before that, Portsmouth won four in a row which takes us back to 1986. The first record of a game between Portsmouth and Shrewsbury Town was an F.A. Cup in January 1910 game Pompey progressed to the next round with a 3-0 home win.

In League One, Portsmouth have three goalscorers sharing eleven goals between them. Top Scorer is Ronan Curtis with five, second is Jamal Lowe with four and third is Gareth Evans with two.

Top scorer Curtis joined in closed season from Derry City and has scored his five goals in just six league games. His record with Derry was pretty prolific too with 17 goals in 22 league appearances.

Craig MacGillivray was our reserve keeper last season but still managed five clean sheets including our 1-0 win at Portsmouth. It's always a shame to see good players leave but having spent much of a season on the bench, I can understand why he left. So far this season he's been ever present between the sticks in League One for Portsmouth and has played a part in his teams three clean sheets.

The basic stats show that Portsmouth have four clean sheets to their name, three of which were recorded in their last three games. Broken down that's Tuesday's 4-0 win at home to Gillingham in the FL Trophy, a 3-0 home win last weekend against Plymouth and a 0-0 draw at Doncaster a week before that.

When they have conceded it's only been one goal and in home games they've only conceded once so far this season. They've only conceded three in the league all season but there does appear to be a pattern as all three were scored in the last fifteen minutes of their games.

Town may be without James Bolton and Abo Eisa but Josh Emmanuel will be available.

Portsmouth will have to do without top scorer Ronan Curtis who is on international duty.

This looks a really difficult game, two teams with massively different starts to the season. Portsmouth are looking like real contenders so far this season and the space between the two teams in the league one table would suggest a home win but there are a couple of factors that could tip things in our balance. The first is that top scorer Ronan Curtis will be missing and he's responsible for close to 50% of Pompey's goals this season. Admittedly they do have excellent replacements in Brett Pitman and David Wheeler, both of whom scored on Tuesday night against Gillingham.

Our form suggests to me that we are steadily turning things around and although we've yet to win, our four draws in five games are encouraging.

Having said all of that, I'm not kidding myself and realistically a draw would be a decent result against one of the form teams at a Fratton Park that's seen just the one league goal conceded. We are going to need an excellent performance throughout the game. 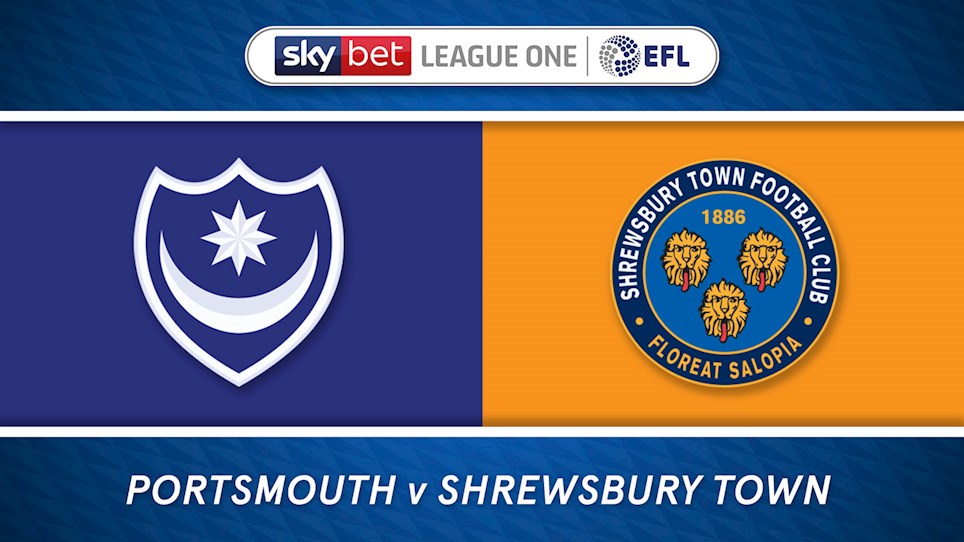 
Ticket details for our trip to the Fratton Park

A point a piece at Fratton Park after a good performance from Town, a late penalty for the home side makes if feel a disappointing result for the visitors

Shrewsbury wouldn’t let Portsmouth get out of their own half in the first half. Fratton Park was kept quiet for the first 45 minutes moans and groans were starting to echo around from Portsmouth fans. Town did everything right apart from find the net.

In the 7th minute, Whalley suddenly found himself in lots of space down the right. He whipped the ball into the box to find John-Lewis two yards out of goal but the shot was just wide of the post.

20th Minute Town created their best move of the half. Lots of intricate passes in midfield, Norburn then threaded a ball through to Beckles who crossed the ball in early. Whalley met the cross in the box but it was deflected out for a corner.

Several minutes later Beckles fired a shot low and hard but was just left of the goal.

Whalley also had an incredible effort on goal from over 35yards. The ball looked to be flying in the top left of the goal but was whiskers wide.

Portsmouth had their first real chance of the game when they were awarded a Free Kick in the 32nd Minute, the ball was whipped by Evans in to the centre of the 6 yard line but Hawkins glanced his effort wide.

Town were awarded a Free Kick just on the edge of the Penalty Box. Whalley took the Free Kick but fired it straight into the wall.

Grant was millimeters away from giving town the lead on the stroke of half time with a great shot inside the box forcing the keeper to scramble over to make sure it was going out.

Both teams went into the break equal on the score sheet. A completely dominant performance from Town but Askey’s side were unable to capitalise and take the lead.

Portsmouth started the second half on the front foot putting Town under lots of pressure but it was well absorbed by the back line. Several corners and Free kicks amounted to nothing for Portsmouth.

Portsmouth almost found the breakthrough as a Town clearance fell to Wheeler’s feet he turned and shot but Coleman gathered the ball easily.

In the 60th minute Town had a huge penalty appeal as a fantastic run from Gilliead saw him brought down in the box. The referee waved it away. Gilliead was left in disbelief.

Coleman made an excellent save as Evans found himself free in the box to head the ball towards goal. Coleman dived to his right to knock it out for a corner.

In the 73rd minute Docherty scored with almost his first touch of the game after coming on as a substitute. Cross came in from Whalley, Burgess went to head it but it looped straight up and dropped to Docherty who kept his calm to volley it into the net.

Town looked to be holding on until they conceded a penalty. The assistant saw the foul from Gilliead on Thompson. Pitman stepped up to the spot and placed the ball in the right corner on the goal.

The game came to an end with both teams earning a draw and taking a point. Askey’s men dominated large periods of the game but couldn’t find the goal that would give his side all three points.


Ticket details for our trip to the Fratton Park

Ticket details for our trip to the Fratton Park

Tickets are now on sale for our away game with Portsmouth.

The game is ALL-TICKET for Town fans and tickets must be purchased in advance.

We have been allocated just over 480 tickets for the game.