Marcus Braddock looks ahead to this evenings trip to Accrington Stanley

Tonight, Shrewsbury Town travel to Lancashire to take on Accrington Stanley in Sky Bet League One. So far this season, Stanley have only played twice in the league so far this season, losing 2-0 at home to Lincoln on the opening day of the season and drawing at Wimbledon 1-1 last Saturday.

Their entry into the Carabao League Cup lasted as long as ours did which gives us both one less competition to worry about. They've scored the same amount of goals as we have in League One and it was scored by striker Colby Bishop, who arrived from Leamington where he's been quite a prolific goalscorer. Bishop also scored last Tuesday in the 3-1 home defeat in the League Cup against Sunderland.

Our last meeting was last season when we were beaten 2-1 at Accrington after beating Stanley 1-0 at the Meadow earlier in the season. Our best result against Accrington was a 5-0 win in 1959 and the highest-scoring game between us was a 3-3 away draw in December 2006 with Michael Symes, Derek Asamoah and Leo Fortune-West scoring for Town and Robbie Williams, Phil Edwards and Andy Todd getting the Stanley goals.

Tonight's referee is Scott Oldham from Lancashire who has so far officiated the games between Portsmouth and Tranmere (2-0) and also Coventry versus Exeter (4-1). So far this season he's handed out five yellow cards and 0 red ones. Last season he was in charge when we beat Barnsley 3-1 at home and when they beat us 2-1 at Oakwell. He was also in charge when we were beaten at Bradford City.

Accrington seem to have no injury problems, Town have a similar squad to pick from as on Saturday.

Sam Ricketts says he's anticipating a hard-working performance whilst also expecting to make as many changes as last Tuesday because this is a league game.

New Stanley forward Colby Bishop has said he wants to score more goals for Accrington after opening his account for the club.

As has already been mentioned, John Coleman usually produces hard-working teams with a little guile and finesse thrown in so we're going to have a hard game in Lancashire tonight. It’s the first League game of the season at home for Accrington so they're going to be more focussed than ever on getting a result. The homework will have been done and they'll know what to expect but the same could be said for us. We have an excellent defensive record to defend and a third clean sheet should be an important objective tonight, as is scoring. I think we have enough about us to get a good result tonight, we've held two good teams so far and hopefully, we can hold another tonight whilst doing the business at the other end of the pitch.

Another goalless first half for Town and Accrington Stanley as neither team could find the back of the net once again.

Stanley got the first half underway however Town began the first half-hour looking the strongest team. Especially with link-up play between Shaun Whalley and Luke McCormick.

The first chance of the half came within the first five minutes as Sam Finley fires a cross into Courtney Baker-Richardson who leapt brilliantly but ended up firing the ball high over Max O’Leary’s net.

Town’s first chance was also within the first five minutes as Ryan Giles fired a ball into the box that met Dave Edwards’ on the edge of the box who attempted a volley but it was deflected and goes out for a Town corner. From the corner, Sean Goss finds Edwards on the front post who heads it just over Dimitar Evtimov’s goal.

Steve Morison, Edwards, McCormick, and Whalley linked up well with each other in the first 30 minutes of play, creating chances but they were just unable to find a goal.

Whalley did well to hold the ball up and keep possession whilst he managed to find Edwards who unfortunately puts it just over Evtimov’s goal.

Town became slightly predictable down the right-wing and linking up with Giles which Stanley seemed to have sussed out and began to close him down quickly. On the other hand, Giles had a lot of the ball down the wing and creating chances with crosses into the box.

Just shy of the 30-minute mark, Town quickly regrouped and took a quick drink break as Baker-Richardson went down holding his hamstring. The first change of the game as Dion Charles replaced Baker-Richardson.

Whalley created great chances after having a good shot which was deflected out for a corner. Goss stepped up to take it and immediately it came back out to him after being turned behind for another corner. Second time lucky, Goss played the ball back into the box, he ball just missed Edwards at the front post, it was glide through the players and found Omar Beckles at the back post who put it the wrong side of the post.

Donald Love had some covering to do after finding himself in the right-back position to deny Charles going through on goal.

Stanley looked to end the first-half strong maintaining possession. They were applying mounds of pressure on Town’s backline hoping to break the deadlock. The half ended with a chance from Maguire on the edge of the 18-yard-box that was fired well over O’Leary’s net and out of the stadium.

Stanley began the second half as they ended their first half – strong. Within the first minute of play, Stanley found themselves with a corner however Sam Finley could only find the side netting.

The first yellow of the game was with Jordan Clark as he went down after claiming Love pushed him in the back. The ref turned it around and gave Clark a yellow for simulation.

On the hour mark, new signing Louis Thompson came on for youngster Luke McCormick. Thompson bought so much energy and power into the midfield after creating an amazing run from one 18-yard-box to the other, Thompson mishit the ball but Whalley won it but just fired it to the side of the goal.

Colby Bishop found himself being fouled by Beckles and won a penalty for Stanley. Bishop stepped up and smashed the ball into the back of O’Leary’s net. Stanley were one up with just over 25 minutes to go.

Just over five minutes later, Stanley found themselves two up with a screamer of a goal from first-half substitute, Dion Charles.

Town’s first goal came from defender Joe Maguire, Giles forced a cross which hit Evtimov and he pushed it onto Maguire which then falls into their own net. Town were one goal behind with just over 15 minutes playing time remaining.

Sam Ricketts made two changes shortly after. Taking off Morison and Whalley replacing them with Daniel Udoh and Fejiri Okenabirhie, both of them made a huge impact to the game instantly.

Giles’ run down the left-wing forces Stanley to face another corner. Up steps midfield-maestro Goss and finds Fey in space and he puts the ball into the back of the net with a class backheel. He levels the score-line and there are just over five minutes remaining.

Beckles manages to clear the ball from his 18-yard-box with a ball that’s heading towards Stanley’s 18-yard-box. Udoh is chasing the ball down and it is a difficult ball for Maguire to defend. Udoh is strong to hold off Maguire and he slides the ball home underneath Evtimov. He puts Town ahead with only added time remaining.

Stanley weren’t giving up easily. A long ball falls to centre-half Ross Sykes who smashes the ball on the half-volley way over O’Leary’s net and way back into the stands.

Town were two-nil down with thirteen minutes to go. A superb second-half performance from Town to secure all three points as they look to go ahead again at Montgomery Waters Meadow this Saturday against Burton Albion.

Tickets are now on sale for our Sky Bet League One trip to the Wham Stadium.

We have been allocated an initial 540 tickets in the Coppice Terrace and Studio Stand for the trip to the Wham Stadium.

Disabled Wheelchair are sold in accordance with the disabled person’s age and priced as above. The carer’s ticket is complimentary with proof that carer is required. Please be aware that the buyer will be asked to produce their documentation for entry into the ground.

Tickets will go off sale from the Montgomery Waters Meadow ticket office at 12 noon on Tuesday 20th.

Town fans will be able to pay on the day of the game at the Wham Stadium.

If you can't make it to the game you can listen to full match commentary, or watch the game live on IFollow Shrews or download the app here to listen if you are out and about - IFollow App. 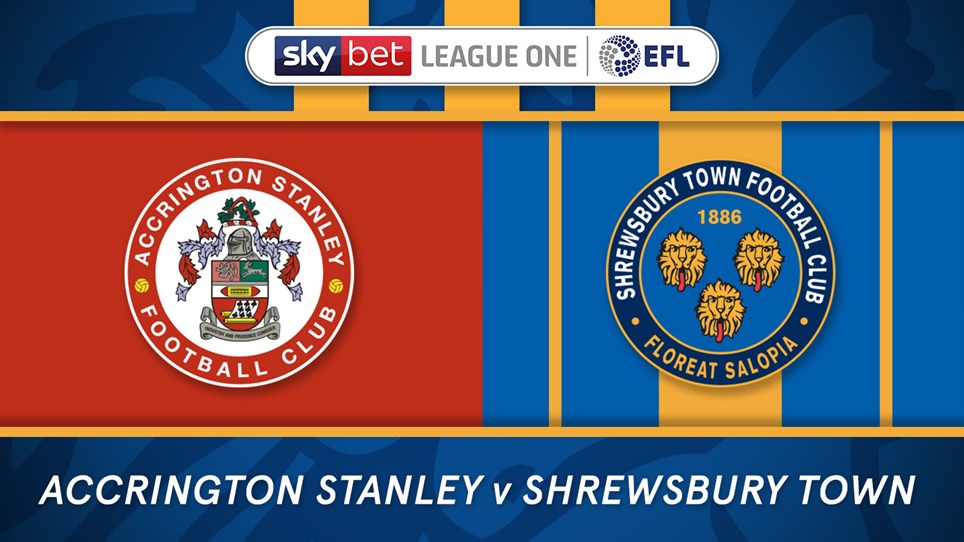