This weekend, Shrewsbury Town travel to the far east of Anglia to face Ipswich Town in Skybet League One. It's a little surprising to see the Tractor Boys this far down the league, as they've tended to inhabit the top two divisions in recent decades. However, last season was a difficult one for Ipswich as early-season hopes turned into relegation misery. They started the season with a new manager but it didn't work out and they parted company in October, leaving new manager Paul Lambert with a tough job. In the end, the hole he was left was just too big to climb out of, so now we have our first league visit to Ipswich since 1989.

So far this season, everything is going to plan in League One, for the Tractor Boys they head the table after five games played although they're equal on points with four other teams. Last weekend they played Bolton away and unsurprisingly won 5-0, the third club in a row to score five against the Trotters makeshift team. It was their third win of the season, having beaten Burton away on the opening day and Wimbledon at home 2-1. They also managed draws at home to Sunderland and away at Peterborough but lost 3-1 away to Luton in the Carabao League Cup which means they've not played since Saturday.

So far, James Norwood is top scorer for Ipswich with four goals, all scored in his last three games with two against Bolton. The 28-year-old made the switch from Tranmere Rovers in June and played along-side Ollie Norburn before he joined Shrewsbury. Another Ipswich player who scored twice against Bolton was Kayden Jackson who was with the Tractor Boys last season after a season with Accrington.

As mentioned earlier, this is our first game in the league with Ipswich Town since the late eighties but anyone of a similar age to me will remember when we played them in the early 1980s in the F.A. Cup. It was when the great Sir Bobby Robson was in charge and helping them win the 1978/9 F.A. Cup and the 1980/81 UEFA Cup. It was a golden period for both clubs with Ipswich riding high in Division One and Town playing at their highest ever level in Division Two. Ipswich fans had stars like Paul Mariner, Mick Mills and Alan Brazil and we had our own stars in goalscorers Steve Cross and Jake King who helped us pull off one of the biggest upsets in our history by beating Ipswich 2-1 in 1982. We'd held them at the Gay Meadow 0-0 the previous year but had been well-beaten 3-0 in the replay and we also beat them 2-0 in the cup in 1983/4 but by then Sir Bobby had moved on to the England job and it didn't quite feel the same as the 82 win. The two cup wins make up two-thirds of our wins against Ipswich whilst they've won twelve times in total with nine games ending in draws. Our best league result against the Tractor Boys was a 2-1 win in 1987 but we've never won at Portman Road. Ipswich's best win against us was 5-1 and was achieved twice, once at Portman Road in January 1957 and once at Gay Meadow in 1988 in Division 2.

Referee
Trevor Kettle from Rutland. Mr Kettle is a vastly experienced official with well over a decade of EFL games under his belt. This is the first time he's been in charge of a Town game this season but he was in charge when we beat Wycombe 2-1 at the Montgomery Waters Meadow and also when we won 1-0 at home to Coventry City. In the 2017/18 season, he sent Ben Godfrey off during a Football League Trophy defeat at the Meadow and was in the middle for our 2-1 away win at Bristol Rovers.

Pre-Match Press
Sam Ricketts has said that the current injury list won't force any major changes to the way we will be playing.
Paul Lambert spoke of the need for solidarity within the team, after a good start to the season.

Squad News
Fejiri Okenabirhie will be out of action for a while with a hamstring injury. Sean Goss could feature but it's a little early for Ro-Shaun Williams and Ollie Norburn who are back in light training.

Summary
This is the sort of game that you dot want when you've got injuries to key players but Sam Ricketts is keeping positive and why shouldn't he after a good start to the season. The forward line has become the focus of things recently and that's been intensified with the injury of Fejiri Okenabirhie, something Paul Lambert will have noted. Ipswich has kept just one clean sheet so far this season and that surely has to be a target for Ipswich. I'm sure Sam Ricketts will have noted the lack of clean sheets and planned with that in mind. Having said that, with our injuries impacting each area of the team, I'd be happy enough with a draw although I think we can beat anyone on our day.

Defeat on the road for Town, slow start and down to 10 men in the first half made it a challenge at Portman Road

A difficult afternoon at Portman Road as 10-men Town struggled against a tough Ipswich side.

Two goals inside the first 10 minutes for the hosts Ipswich showed how the game was to pan out. After a poor ball from Aaron Pierre attempting to find captain Dave Edwards in the middle, Ipswich won back possession finding James Norwood on the right-hand-side who played a through ball into Kayden Jackson who fired into the back of Max O’Leary’s net.

Town came close just after with Shaun Whalley down the left-side, he floated a cross into the box to find Steve Morison’s head but he placed it over Tomas Holy’s bar.

Shaun Whalley found himself first in the book after stopping Ipswich to take a quick free-kick. With 10 minutes left of the first half, Whalley found himself receiving a second yellow card after losing the ball saw him put in a late challenge. Whalley saw red and Town played the remainder of the match with only 10 men.

Just shy of the 10-minute mark, Josh Laurent gave a penalty away after tripping up Kane Vincent-Young just inside the 18-yard-box. Up stepped Norwood who fired it under O’Leary. Ipswich found themselves 2-0 with only 10 minutes gone.

Town had a few chances on the break but were struggling to find an end product. Town’s first chance came from Whalley, before he saw red, after receiving a throw on the half-turn and firing it from 20-yard, however, Holy gathered it.

The Tractor Men came close again shortly after as Sean Goss had the ball in the midfield and looked back to play into the back four, however a loose pass was quickly picked up by Norwood and was put just wide of O’Leary’s net.

From O’Leary’s kick, Town went on the attack and won a corner. Up stepped Goss who found Ethan Ebanks-Landell sliding in at the back post but could only manage to hit the crossbar which was then deflected out and landed for Pierre who smashes it high over Holy’s bar.

As half-time was approaching Town continued to attack with Giles ran the ball down to the by-line, he pulled it back to Lauren who smashes a first-time hit that looked to by flying in but Holy got a hand to it and put it out for a corner. Goss steps up and finds Morison at the back post who could only use his knee which looks to be flying in again, Holy saves again.

Town got the second half underway and began looking like the stronger team. Pressing high, keeping possession and creating chances. Laurent pressed on Ipswich’s defence and forced them into a throw, by the corner flag. The ball found Morison who was surrounded by three defenders and the ball ends up with Holy.

Town created some good chances during the second half but struggled to find the back of the net. A good chance came from Laurent around 30-yards-out but Holy managed to keep hold.

Just shy of the 70-minute mark, Ipswich secured a third and final goal. After a low driven cross from Jackson found the head of Flynn Downes, who connected with a diving header around the penalty spot.

Town made their first sub shortly after. Daniel Udoh came on to replace Morison. Udoh forced a Town corner after putting pressure on Luke Chambers. Goss took the kick and found Edwards’ head but was deflected out for another corner after the ball flew through the box.

Laurent played some great football in the middle with good feet and found Goss on the left who hit a long ball cross-field to find Donald Love down the right, but Love’s first-time volley was fired out for a goal-kick.

Town played some good football throughout the second half with only having 10-men but struggled to find an end product.

They look to go again Tuesday evening against Port Vale in The Leasing.com trophy.

Tickets are now on sale for our Sky Bet League One trip to the Portman Road.

We have been allocated an initial 780 tickets in the Cobbold Stand and Co-op Stand for the trip to the Portman Road.

Tickets for wheelchair users are located in the East of England Co-op Stand and not with Town supporters, this area is a mixed home/away disabled area.

Ambulant disabled supporters are located in Block S in the Lower Tier of the Cobbled Stand, again this is a separate area to the rest of your supporters.

There are car parking spaces available for visiting disabled supporters, these can be purchased by contacting Ipswich’s Disability Liaison Officer on 01473 400 556.

Tickets go off sale at 3 pm on Friday 30th, after then it is pay on the day at Portman Road with no prince increase. 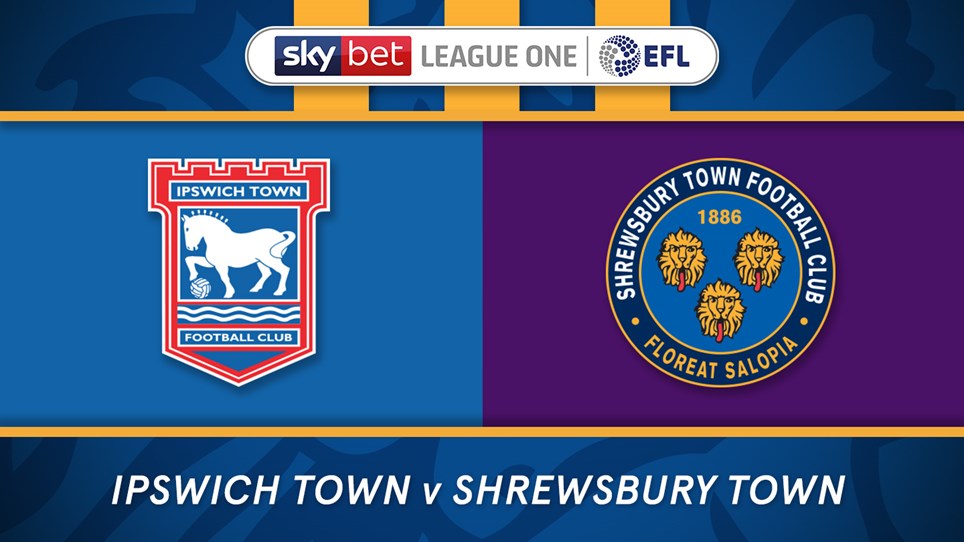