Sean Goss misses the game with a knock, in came Josh Laurent and Brad Walker to the starting line-up. Luke McCormick hasn’t fully recovered from the knock he picked up at Accrington but is ok for the bench. A few other knocks and bumps came into play in Sam Ricketts team selection for the game.

Town had a good opening from the kick-off, the ball was moved wide to find Morison, he got forward and delivered an inviting ball across the face of goal but it had a little too much on it for Whalley to convert.

Town were creating some good openings and on 6 minutes a long clearance from O’Leary saw Whalley chasing down the ball, he allowed it to drop and then muscled off his marker before playing it wide to Morison, he took a touch and played it to the edge of the box for Laurent, he tried the volley but didn’t connect cleanly.

Town were moving the ball quickly and taking the game to the visitors, good pressing from Edwards saw the ball with Morison out wide, he played it back to Love who then switched it cross-field to find Giles, he fired in a low shot but it was deflected over for a Town corner.

Burton were starting to get some good sights on the Town goal and on 21 minutes Fraser got in behind the Town defence, he was in space and looked to shoot but good covering from Pierre saw him get a block in and O’Leary then collected.

Town had a penalty shout just before the half-hour mark, Whalley pounced on a slip in the Burton defence and was away on goal, he had defenders snapping at his heels, he turned one and then burst into the box before going down under the challenge, ref Swabey was on the spot and saw nothing a miss and waved play on.

Burton were still creating good openings and when The ball found Akins in the Town box he showed good strength to hold off Pierre and get past him, he cut the ball back but Beckles was covering and put it behind for a corner.

The visitors won a free-kick out on the right after Pierre was adjudged to have fouled Akins, the ball was whipped in with a good looking delivery, O’Toole got up highest but his header was wide of the target.

Town had a good chance on 40 minutes, a quick break saw the ball with Laurent in the middle, he drove forward, skipped past a defender on the edge of the box and fired in a low shot, but O’Hara was down quickly to save.

Town had a free-kick on the stroke of half-time after Whalley was upended just outside the box, it was Whalley who took the kick and whipped an inviting ball up and over the wall, but no one was close enough to apply to the final touch.

There were chances at both ends straight from the restart, first Burton looked like they might break the deadlock but good covering from Pierre saw him snuff out the danger. Then at the other end, good work from Love found Edwards in the box, he hit in a good looking shot but it took a deflection off Whalley and the chance was gone.

Town had a great chance to take the lead, the ball found Whalley in space in the box, he couldn’t find the angle to shoot so took it to the by-line and crossed back into the danger area, he found Laurent who took the ball down to set-up Edwards, he fired in a shot from inside the box but it flew just over the bar.

Sam Ricketts made his first change of the afternoon bringing on Fejiri Okenabirhie to replace Steve Morison.

Town had a good chance following a quick break, the ball was with Edwards who drove forward, he played it wide to Giles who held it up before playing to Laurent, he turned his marker and cut inside and then curled in a decent shot that was just wide of the target.

Burton had a good chance on 69 minutes from a corner, the ball was whipped into the Town box and Akins rose well and connected powerfully, but luckily he put it the wrong side of the goal.

Okenabirhie went into the ref’s book after Mr Swabey saw enough in Frey’s challenge on O’Toole to warrant a yellow. Shaun Whalley was the next Town player to make way with Dan Udoh coming on for his home debut.

Town hit with a great counter-attack after a neat backheel from Okenabirhie found the run of Thompson, he kept driving forward and had options with Udoh to the left and Love to the right, he threaded a ball into the run of Love but it had a little too much on it and the chance was gone.

Burton were finishing well and when Akins cut it back into the box, the shot was driven goalwards but Beckles was there with a great block, there were big shouts from the Burton box for a handball but the ref was having none of it.

Town had good chances at the end after good battling from Udoh saw the ball drop to Okenabirhie in on goal, but the flag went up, though the finish from Love after the ball dropped to him was good.

The draw of the Postcode Ticket Giveaway has taken place and the winning postcode is WV15 6DN.

Close to 500 tickets were given away last season with people getting the chance to take in a Town home game for free.
If you are in WV15 6DN then keep an eye on your letterbox for your free ticket vouchers. 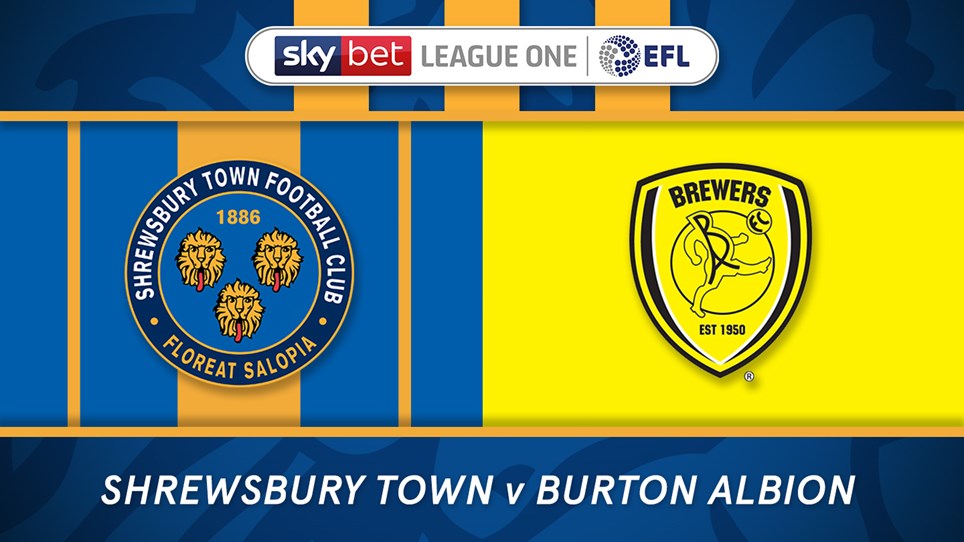