The new season is almost here and our first game is against last seasons unlucky play-off semi-finalists Portsmouth. Kenny Jackett put together a strong team last season but ultimately failed at the penultimate hurdle when Sunderland broke their hearts by scoring a winner in extra-time at Fratton Park.

In the closed season, Jackett saw one of his best players bought by fellow south coast club Brighton for a fee reportedly in the region of £3-4 million, that's pretty good money for a league one defender

Jackett has also added to his defensive options bringing in Paul Downing on loan from Blackburn, Sean Raggett from Norwich on loan and James Bolton who gave us 2 years service before heading south. This week, Pompey top goalscorer Jamal Lowe moved to Wigan in a multi-million-pound deal and they look to have spent a fair chunk of it immediately on striker John Marquis from Doncaster Rovers.

We've played Portsmouth a total of 25 times including an F.A. Cup game in January 1910 that Pompey won at home 3-0. Our highest scoring win against Portsmouth was a 6-1 home win in 1977 and their best result against us was a 4-0 home win in what is now known as the Championship. Our most recent win against the south coast outfit was in January 2018 when we beat them 1-0 at Fratton Park. Their last win against us was a 2-0 win at Montgomery Waters Meadow last season.

Ronan Curtis and Jamal Lowe topped the assist list for Pompey with eight each. Oliver Hawkins chipped in with six and Gareth Evans got five for the season.

Portsmouth recorded 12 clean sheets in last seasons Skybet League One campaign, eight at home and six away from home.

Ollie Norburn isn't quite ready after his injury in closed season but Joe Murphy is likely to be available.

The first game of the season is always the one I look forward to most, probably because we've not had any competitive games for a fair while. It's one that can be difficult to predict the result but I would imagine that Pompey will be favourites after last seasons finishes and that would be backed up by the sort of money they are able to spend. Defensively speaking Town have looked fairly strong in pre-season with Aaron Pierre and Ethan Ebanks Landell settling in well. Upfront both Daniel Udoh and Steve Morison have arrived to help last seasons top scorer Fejiri Okenabirhie although may yet see another added with the transfer window open a little later this season for EFL clubs. The midfield was already pretty well stocked with youth and experience but Sam Rickets has signed Luke McCormick from Chelsea on loan and he's looked very impressive.

Sam Ricketts preferred formation could be described as a 3-5-2 system with three central defenders giving the two fullbacks the freedom to operate as wing-backs to supply opportunities from the flanks. This means that we'll have a central midfield core of three players and depending on how we play there will be a combination of defensive or attacking duties. One of the advantages of this system is the ability to attack quickly and in numbers but still retain a defensive core to cover breaks.

How this all works in practice will decide how we do in 2019/20 and I'm full of anticipation for the new season.

Ryan Giles hit home a screamer for Town which secured all three points which made it a great win for the opening game of the season.

A quick-thinking free-kick from Shaun Whalley that set Giles to smash home a 30-yard screamer into Craig MacGillivray’s net. Portsmouth’s Ross McCrorie bought down Whalley just outside the centre circle which led to Giles’ goal.

Ross McCrorie received his second yellow card of the game after a late challenge on Donald Love. Town looked to expose and dominate the game for the last 10 minutes of play.

A goalless first half at Montgomery Waters Meadow, although the second half was full of excitement. Both teams started their 2019/20 season campaign strong and yet to concede within the first 45 minutes of play, however with 25 minutes to go for the final whistle, Giles’ screamer secured all three points for Town.

With nine new signings starting the opening game of the season, Town looked strong. After being on the end of six corners in the first half, the backline did not want to be the first team to concede this game.

The second half bought us, yellow cards, a red card, end to end play and a world-class goal from left wing-back Giles.

Max O’Leary was used many times within the first half after Town being slightly dominated by the press and counter attacks from Portsmouth.

Giles gave Town a very good opportunity of scoring in the first 45, as he whipped a left-footed cross over to MacGillivray’s back post where Aaron Pierre was there just to head the ball wide of the net.

Steve Morison gave Town more hope in the first 45 minutes after he sweetly smashed a half-volley inches over MacGillivray’s net.

Portsmouth looked to end the first half strong, maintaining possession with a shot by John Marquis that was blocked on the edge of the box by Ro-Shaun Williams. Portsmouth started their second half strong just as they ended their first half, however, it just wasn’t enough to get something from the game.

Portsmouth made the first two subs of the game, shortly followed by two subs for Town. The impact from Josh Laurent and Whalley gave Town the push that they needed.

Portsmouth had a goal cleared from a John Marquis shot that looked like it was heading in. Fantastic defending from Aaron Pierre to put it out for a corner.

For the last 25 minutes of the game, Town looked in control and dominated as they were a player up, but also a goal up. Even centre-half Pierre joined in on the action as he turns away and through two of Pompy’s defence.

With six minutes added on after the 90, Portsmouth had a last-ditch minute corner, which fell to Portsmouth on the half-volley and smashed it way over O’Leary’s goal and into the away stand.

Three points on the board for the opening game of the season and a positive mentality that Town can take into next week’s game away at MK Dons. The crowd and support have been fantastic with a grand total of 7880 here at Montgomery Waters Meadow.

The draw of the Postcode Ticket Giveaway has taken place and the winning postcode is SY5 6HL.

Close to 500 tickets were given away last season with people getting the chance to take in a Town home game for free.
If you are in SY5 6HL then keep an eye on your letterbox for your free ticket vouchers. 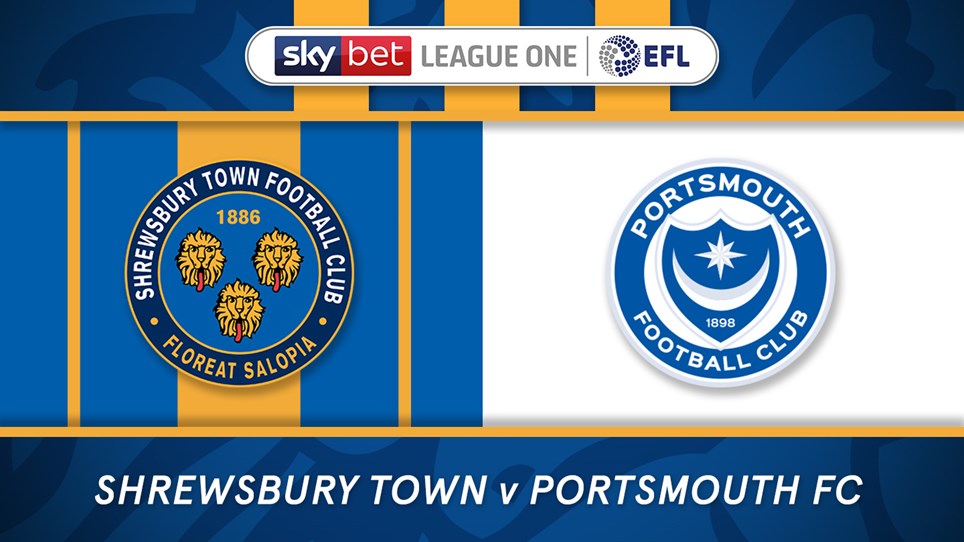