Marcus Braddock looks ahead to the weekend trip to Blackpool

With just four short days until Christmas, Shrewsbury Town are off to the seaside to face fifth-placed Blackpool. It's been a pretty good season so far for the Tangerines, who have lost just four times this season in Skybet League One this season. Just like Coventry last weekend, they've drawn quite a few times although much more so away than at home. Of their ten home games this season, the Seasider's have won six, drawn two and lost two, with their most recent home defeat occurring in October when they lost 2-1 to Rotherham at Bloomfield Road. That's also their last defeat in League one, meaning that they're unbeaten in their last seven league games. Recent form has seen Blackpool win three of their last five games and drawing two, scoring 12 times and conceding seven.

Two at home and four away from home.

Town midfielder Ollie Norburn will miss the match through suspension.

Neither team has any new injury problems.

Sam Ricketts has been refuting claims by the current Coventry Manager that Town are an overly physical team. The post-match comments were voiced after Coventry's defeat last weekend, a game in which Coventry committed two more fouls than Town.

Simon Grayson has been talking about the importance of squad rotation at this time of year when games are more frequent.

This will be yet another tough game for Sam Ricketts' team, Blackpool are not in the top five places without good reason. From the stat's you can see that we have two main threats to counter and that's Liam Feeney and Armand Gnanduillet, who get most of Blackpool's assists and goals. It would be a mistake to think that these are their only real strengths. We have first-hand experience of how good Sully Kaikai is from his short spell at Montgomery Waters Meadow. He represents the level of the Blackpool squad, extremely able and equally dangerous. This is another one of those games when a draw would be a decent result and a win would be a great gift, particularly to our away supporters who turn out in all weathers, whatever the time or place.

Okenabirhie penalty enough to give Town deserved win on the road

With captain Ollie Norburn suspended after picking up five yellow cards, Sam Ricketts makes some changes. Brad Walker comes in to make his first league start, Omar Beckles starts whilst Ro-Shaun Williams is benched and Dave Edwards will wear the captain’s armband for the 90 minutes.

Shaun Whalley earned himself a starting XI shirt after his victorious performance over Coventry last week, however, Ryan Giles starts on the bench and Jason Cummings missed today’s match after suffering from a bug.

Fejiri Okenabirhie’s goal was the difference of the 90 minutes at Bloomfield Road as Town take home another three points making it back to back wins.

Neither team could break the deadlock after the first 45 minutes, however, both teams had their fair share of chances. The home side came closest on the first occasion after Liam Feeney fired in a ball that was just over Armand Gnanaduillet’s head. The ball was fired back into the box quickly after but shot-stopped Max O’Leary was quick off his line to punch clear.

Town’s lone striker, Fey chased down a loose ball and found Shaun Whalley linking up with him. Whalley cut in on the edge of the box and hit a bouncing ball with his left but Jak Alnwick does well to get down and gather the ball.

O’Leary pulled off the save of the game just inside the first 20 minutes of play. Captain Jay Spearing curled in a cross from afar and Gnanduillet does well to reach it. The header was dipping just under O’Leary’s bar but his cat-like reflexes manage to tip the ball over the crossbar and out for a corner.

Fey could’ve opened the scoreline after O’Leary drilled a ball upfield, it landed at the feet of Whalley, Whalley laid off Fey but Ryan Edwards was there to deny any shots.

Donald Love came so close to scoring in the first 45 minutes. His first chance came after Scott Golbourne fired in a cross and Blackpool’s Alnwick and Edwards collide making Alnwick’s punch fall at the feet for Love. Love shoots but it was just inches wide.

Donald smashed an oncoming volley just over Alnwick’s goal. Town continue to pile on the pressure, again, Love was on the end of another Golbourne cross however his chance was missed.

Not only are Town having luck upfront, Town’s backline is just as solid. Omar Beckles got his body between Gnanduillet and the ball to deny any on-coming shot. O’Leary was quick off his line to collect the ball.

Blackpool came closest to scoring first again after a corner was fired in and headed onto the post after Town struggled to clear away the danger.

A Town free-kick was floated into the box and Blackpool struggled to deal with it. Gnanduillet is pulled up after being caught with a handball in the box and Town win a penalty. Fey stepped up to take and smashed it straight down the middle allowing Alnwick no chance of saving it.

Town look to go on the break again after Whalley won the ball down the right and began weaving his run throughout the Blackpool players. Whalley is bought down by captain Spearing on the edge of the 18-yard-box and referee Stockbridge cautions their captain.

Blackpool made their first two substitutions with only 30 minutes remaining. Matty Virtue and Ollie Turton make their way for Sullay Kaikai and Joe Nuttall. Whilst Sam Ricketts makes his first substitution as goal scorer Fey makes his was for Dan Udoh.

The hosts still looked for an equaliser after struggling to break down Town. Ben Heneghan had a good chance but his header rolled wide of any danger for O’Leary.

Whalley played to Udoh, Udoh laid off Laurent and ran it to the byline, after an interception the ball rolled out for a corner but Whalley’s crossed flew through the many bodies in the box.

Town had another great chance with only minutes remaining on the clock. Beckles cleared the ball to Golbourne down the left and Golbourne curled a pass for Whalley to run onto. Whalley is clean through on goal but somehow missed the target from close range.

Sam made his second substitution of the game as Brad Walker looked to be struggling. Walker was replaced by Sean Goss. As the fourth official indicated a minimum of six minutes extra time, Ricketts took charge by bringing Whalley off as Lenell John-Lewis made his way onto the pitch.

Tickets are now on sale for our Sky Bet League One trip to Bloomfield Road.

We have been allocated an initial 616 tickets for the game.

Tickets can be purchased on the day, cash only, from the kiosk located next to the away end. There is no price increase.

Tickets go off sale from the STFC ticket office at 3 pm on Friday 20th November. 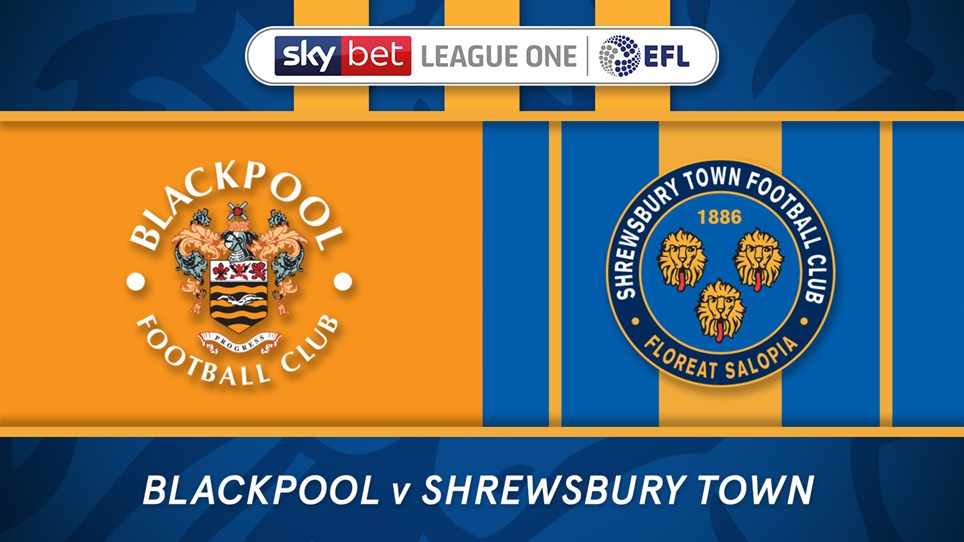