Marcus Braddock looks ahead to Sunday's trip to Bolton

The last time we played Bolton was a couple of seasons ago and we lost both games as the Trotters followed Sheffield United into the Championship. Since then, the fortunes of both those clubs couldn't be more diverse with United becoming the toast of the Premier League and Wanderers rooted to the bottom of League One. The reasons for their low position is a 12 point deduction for entering financial administration, which is always sad to see from a fans point of view. Obviously the lack of finances is also a contributory factor to their league position and as sad as it is, this is a pattern we've seen before in this division. Like Icarus, as clubs attempt to fly ever higher, they diminish their means for staying there and end up passing us as they fall.

As we already know, the impact of their financial punishments has been that relegation is almost certain but for a superhuman effort that on current form seems unlikely. The early weeks of the season saw them lose or draw pretty much every game until September when they started to draw more than they lost. This seems to have roughly coincided with new owners arriving and appointing Keith Hill as manager with Wanderers suffering just five defeats in their fifteen games since then. They've also kept five clean sheets since Hill arrived, as opposed to just one before his arrival.

The Trotters have six points so far in SkyBet League One which includes the 12 point deduction, so even without the deduction, they would still be in the bottom three by two points. However, if looked at over the last eight games, Bolton's form is actually better than our own by two points with a 50% win record and only a couple of defeats. Their last two of games have seen them win 3-2 at home to Southend and then draw 0-0 at Sunderland on Boxing Day in League One.

They've been pretty good at home since October, losing just once, in the F.A. Cup against Plymouth and beating the likes of Fleetwood, Man City Under 21's and Milton Keynes. The one major blip for Hill's Bolton was the 7-1 demolition they suffered at the hands of Accrington which was a reminder of some of the heavy defeats before Hill arrived although the Trotters were down to ten men after a quarter of an hour when defender Josh Earl was sent off.

Top scorer for Bolton is 36-year-old Irishman Daryl Murphy with six goals since joining them in September. The 6'2 striker has had successful spells in England with Ipswich, where he scored 50 times in 133 games and more recently with Notts Forest, where he scored thirteen times in 60 games between July 2017 and closed season 2019.

Top on assists for Bolton is 28-year-old Doncaster Loan midfielder Ali Crawford, who has three after just 9 games since joining in September. Crawford started his career with Hamilton where he made over 200 appearances and scored almost 40 goals. He made the move to England in 2018 when he Joined Doncaster but he's not been a regular starter at the Keepmoat Stadium and opted for game-time at Bolton. Sadly, he's been sidelined since last October, which leaves striker Joe Dodoo who has two assists so far this season.

The 24-year-old striker was signed in October and has two goals to add to his two assists from thirteen games in all competitions. The ex-Leicester City trainee has also spent time with Rangers, Charlton and Blackpool since arriving in the U.K. from Ghana aged eight.

Neither manager has reported any fresh injury concerns. Ollie Norburn still is getting over a bug and might not feature.

Sam Ricketts has mentioned his fondness for Bolton, having spent four years there, he's also cautioned against complacency, given their recent problems.

This is going to be a much more difficult game than it may have been if we'd played Bolton earlier this season but it won't be the first time a team has had an injection of cash partway through the season. I have a feeling that the next time we play Bolton, it may be a fair a bit more difficult again, with a transfer window about to open. However, the current reality is that we can expect a tough game against a hard-working team that will give very little away.

Bolton took the lead but Town equalised through Udoh, Bolton down to 10 men but Town just couldn't get that second goal

A point apiece for Bolton and Shrewsbury. 10-man Bolton manages to play out the remainder of the game after many Town chances. Dan Udoh with the equalising goal mid-way through the second half.

The first 45 minutes of play were tough for Town as they headed back to the changing rooms a goal behind after Thibaud Verlinden was the difference.

Town started the game brilliantly and looked the team on top. Shrewsbury kept possession, played some great football and had the first chance of the game inside the first two minutes.

Dan Udoh played through Ryan Giles as Town went on to break, Giles squared the ball into Shaun Whalley where he was waiting at the back post, however, Bolton’s backline managed to recover well and clear away the danger.

Minutes later, a long ball from shot-stopped Max O’Leary caused confusion between Remi Matthews and his defence again after a mis-hit punch landed well for Whalley again. Whalley controls the ball and smashed a half-volley inches wide of Matthews’ post.

After the first 10 minutes, Bolton began to get their hold in the game. Their first chance came from Verlinden as he broke down the left-wing and clipped in a curling cross that landed on the head of Daryl Murphy but it was just over O’Leary’s bar.

15 minutes into the first half and the hosts were forced to make a change. Captain Liam Bridcutt made way for Adam Chicksen. O’Leary then sprang into action again during the first half after producing a class save from Luke Murphy’s header.

Bolton had another great chance after Joe Dodoo had his shot deflected on its way through to the goal but O’Leary did well to get down and gather the ball.

With just over 30 minutes on the clock, the home side manages to break the deadlock. A long ball over the top from Ronan Darcy sees confusion in O’Leary whether to come or go. Verlinden takes his chances and manages to chip the ball over O’Leary.

Whalley got the second half underway and Town started the second half strong. Udoh came closest first after captain Norburn played the ball out to Love down the right, Love whipped a ball in just inches away from Udoh’s head but Matthews did well to collect it.

Aaron Pierre came close shortly after. Scott Golbourne’s cross landed on the head of Pierre but his header was just over the bar.

With almost 10 minutes of the second half played, Dan Udoh found the equaliser. Whalley made the goal but was unlucky not to finish it. Udoh latched onto a loose ball in the box and slotted it home past Matthews, making the scoreline level.

The hosts came down to 10 men after Jason Lowe saw a straight red for a reckless challenge on Norburn. The free-kick saw Whalley’s ball headed away and behind for a Town corner in front of the Town fans.

Pierre came close again after being on the end of Whalley’s corner ball. Pierre’s headed effort is just over Matthews’ bar. Town continues to look dangerous and look for the winning goal.

Whalley with another great corner finds Norburn at the back post and he smashed a volley but Chicksen did well to block it. Norburn’s second effort took a deflection and went behind for another Town corner.

Bolton made their second substitution of the game as their goalscorer, Verlinden was replaced by Sonny Graham.

Shrewsbury continues to look dangerous on corners. Whalley’s ball found Pierre and his effort was cleared off the line. The ball then fell to Ro-Shaun and he put the ball over the bar.

Sam made his first change of the game with only 10 minutes remaining. Goalscorer Udoh made way for Jason Cummings as Town still looked to get the winning goal.

Whalley and Laurent had fantastic chances. Both efforts from point black range and Matthews managed to block both shots as Town are hungry for the winner.

As the fourth official indicating five minutes added time, Sam made his second change of the game as Love made his way for Fey. Bolton made their third and final change as Joe Dodoo was replaced by Chris O’Grady.

Late heartbreak for Town again as Whalley scored what looked to be the winner, however, the linesman flagged for offside.

Tickets are now on sale for our Sky Bet League One trip to University Of Bolton Stadium.

Tickets are now on sale for our Sky Bet League One trip to the University Of Bolton Stadium.

PAY ON THE DAY DETAILS - Supporters will be able to purchase tickets directly from the turnstiles at Block E of the Franking Sense South Stand. Tickets will be sold on a cash-only basis from 2 pm onwards. Ticket prices do not increase on the day.

We have been allocated an initial 800 tickets for the game with Town supporters housed in the South Stand lower tier.

Please note all concessions must show identification at the turnstiles to gain access to the stadium.

Car parking facilities are available for away supporters priced at £7 per car, £12 per minibus and £20 per coach, payable on entry to the car park. 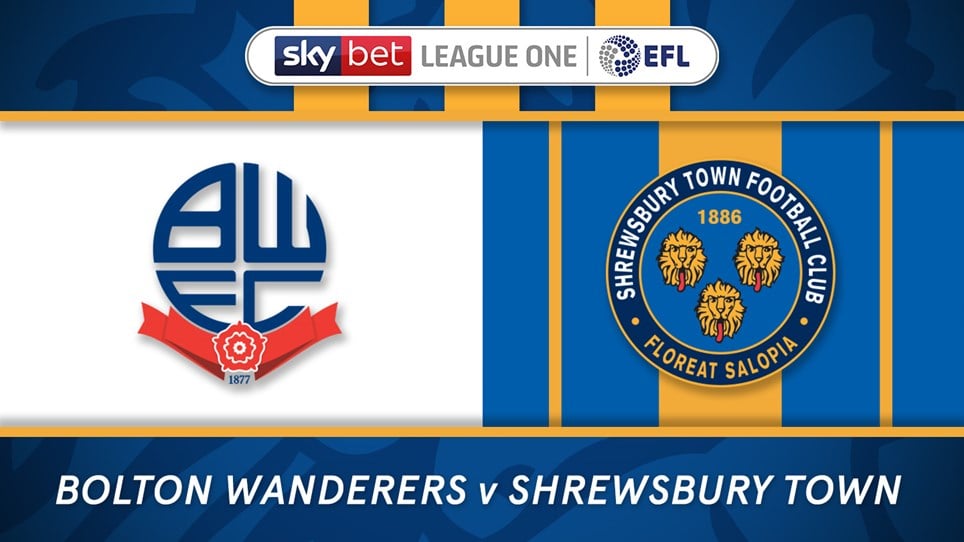 
Tickets are now on sale for our Sky Bet League One trip to University Of Bolton Stadium.