Marcus Braddock looks ahead to this evenings Leasing.com Trophy game

Having qualified for the Leasing.com Trophy via the group stages, Town face Manchester City U21's at Montgomery Waters Meadow. City qualified via victories over Rochdale and Bradford in their first two games, teams that we could only draw with at home. Their final game in the group stage was a defeat at the hands of the improving Bolton who beat them 3-1.
Top Scorers
in this competition, City have five goals to their name with midfielders Adrian Bernabe, Tommy Doyle and Morgan Rogers and striker Jayden Jezairo Braaf getting a goal each. the other goal was an own goal scored by Boltons Yoan Zouma.
Head to Head
We've played Man City u21's once before, at the beginning of last season when John Askey was in charge. the game ended in a draw with Lee Angol scoring for Town and  Nabili Zoubdi Touaizi getting a late penalty to take the game to penalties which we won.
Referee
Peter Wright. Games this season:16. Yellow cards: 50. Red cards 2. Mr Wright has been in charge of us twice already this season, once at the Meadow when we beat Newcastle United u21's 3-0 and most recently at the Meadow where he sent Donald Love off.
Assistant's
Oliver Bickle and Peter Gooch
Summary
As ever it's difficult to guess how this one will go. I've seen a fair bit of footage from this seasons Premier League 2 and Uefa Youth Cup and the standard looks pretty good. They've also beaten some good teams in this competition already and will, no doubt, be looking to progress. However, they have to unpick our defence before they can score and that's our greatest strength. They also have to stop us scoring and we've improved in front of goal recently with 9 goals in four games. The most important thing to remember tonight is that the game kicks off at 7.30 pm and not the usual 7.45.
COYB!!!

It's Man City who progress to the next round of the Leasing.com Trophy 6-5 on penalties

Sam Ricketts make six changes to the side that started against Mansfield Town in the Emirates FA Cup on Saturday. In come Omar Beckles, Ryan Giles, Sean Goss, Brad Walker, Daniel Udoh and Lenell John-Lewis to the starting line-up. New signing Ousmane Fane is on the bench and Ollie Norburn starts after having his red card overturned.

The best chance of the opening exchanges came from Man City, they got in down the left and the ball was put into the Town box, Doyle took it down and hit a low shot but O’Leary was equal to it tipping the ball around the post at full stretch.

Town created a good chance on 6 minutes, good pressing down the left saw the ball come back to Golbourne, he curled an inviting ball into the 6-yard box and John-Lewis rose well to head the ball, but it was just over the bar.

City were set-up to play expansive football with players staying out wide and hugging the touchline. A ball down the City left saw Rogers get in behind the Town defence, Williams came across to close him down, Rogers looked to get past but Ro-Shaun held his ground and saw the ball behind for a Town goal kick.

On 15 minutes Ryan Giles picked up the ball out on the left, he drove forward and hit a good looking effort from 25 yards out but Grimshaw in the City goal did what was needed to deny Town.

Town had a nice counter attack on 22 minutes after repealing a City attack, the ball was played down the left into the run of Giles, he carried his run forward before curling an inviting ball into the City box, John-Lewis was there and connected well, but the ball went just wide of the post.

It was Town who took the lead on 23-minutes after some good pressure, the ball came back to Scott Golbourne 25 yards from goal, he was in space and looked up before driving a superb shot into the top of the far corner.

Town were creating some good chances, and a lot of these were coming from counter-attacks. A ball through midfield found Udoh just over the halfway line, he got past his marker and drove for the City box, he cut the ball back towards John-Lewis who had found space in the box, but a City foot got in before Lenny could connect.

City had a great counter-attack after Touaizi showed great past to burst into the Town half, he was driving for goal but Goss showed great pace to get back, Touaizi then laid the ball to his left to set-up Rogers, he drove in a low shot but O’Leary was there with a great block with his feet.

Doyle placed the ball just outside the Town box, he connected well and the ball looked to be heading for the bottom corner but once again O’Leary was equal to it with a great save.

Town had a good chance after the restart, John-Lewis was fouled by Dionkou in front of the family stand. Norburn placed the ball and drove an inviting ball towards the back post, but it had just a little too much on it for Beckles and then John-Lewis.

Town were awarded a free-kick just outside the City box after another foul on John-Lewis. Goss, Norburn and Walker stood over the ball but it was Walker who stepped up and hit a good-looking shot but Grimshaw was down quickly to collect.

City were comfortable on the ball, as you would expect from a side such as them. They were sticking to their principles and passing the ball around sharply to try and create the spaces for chances. Carlo Poveda showed good feet to skip through the Town midfield and into the box, but the defence stood strong and Carlo Poveda had to start again, the ball came back in but the header was over the bar.

On 66 minutes Town made their first change with Fejiri Okenabirhie who replaced Lenell John-Lewis, who had got some more good minutes under his belt as he continues his comeback.

City got back on level terms after Golbourne gave away a free kick on the edge of the box, it was Doyle who was over the ball and he hit a good strike in which gave O’Leary no chance.

The goal gave City a lift but Town were continuing to create chances, good work from Goss saw the ball come back to Okenabirhie, he had options but choose to fire in a shot from the edge of the box which fired over.

On 78-minutes Town made a second change with John Laurent making way for Luke McCormick. Then minutes later Town made their final switch with Dave Edwards coming on to replace Daniel Udoh.

With the full-time whistle approaching the game was getting stretched and there were chances at both ends. City had a couple late on after Dele-Bashiru showed good pace down the left, he fired a ball across the face of goal but Golbourne was there to turn it behind to safety.

City had a great chance to win it right at the end, Keke Simmonds did a lovely turn on the edge of box to put him in on goal, he smashed in a good looking shot but O’Leary was there with a great save.

And with the score level it was onto penalties.

Shrewsbury Town are pleased to confirm the date and ticket details for the Leasing.Com Trophy group game against Manchester City U21s.

The game will take place on Tuesday 3rd December with a 7:30 pm kick-off at the Montgomery Waters Meadow.

Only the Roland Wycherley East Stand and DM Recruitment North Stand will be open for these games.

If you can't make it to the game you can listen to full match commentary, or watch the game live on IFollow Shrews or download the app here to keep in touch if you are out and about - IFollow App. 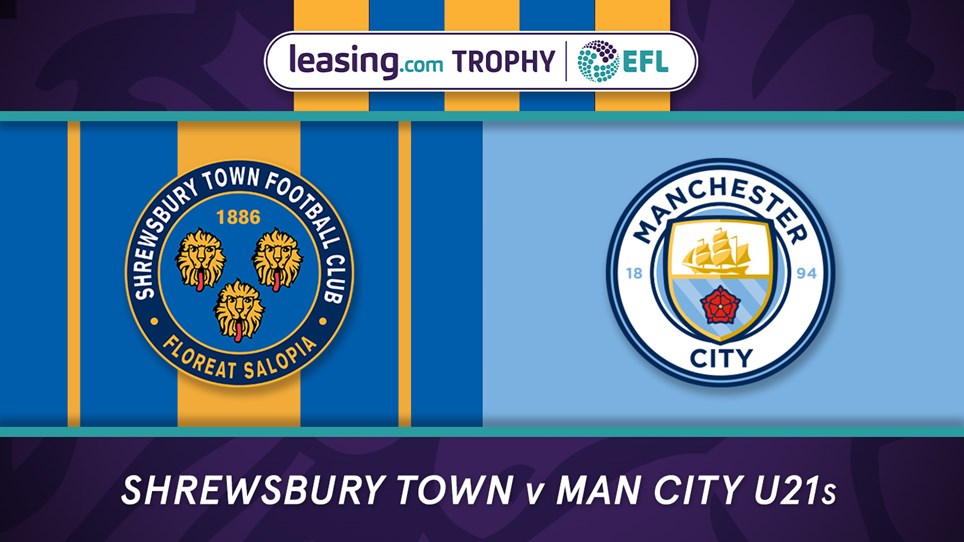