All square at Grenbole Road after good performance from Town

A point a piece at The Kassam Stadium where neither team could find the opening goal. The game ends 0-0.

Sean Goss and Fejiri Okenabirhie started today’s game after Jason Cummings began on the bench. Scott Golbourne continues to keep his place down the left-hand side as Ryan Giles is on the bench this afternoon.

Oxford’s top goal scorer James Henry starts the game looking to break through Town’s strong back-line in an attempt to add to his goal tally.

After the National Anthem, both teams walked out to do their respective handshakes. Town in all purple and Norburn got the game underway.

A solid start for Shrewsbury this afternoon as they headed into half-time at nil-nil. However, Town looked the team on top for the majority of the first 45 minutes. Shrewsbury’s first chance of the game came inside the first two minutes of play. Scott Golbourne gave away a corner for Oxford, however, shot-stopper Max O’Leary gathered the ball to safety.

O’Leary fired a ball down the right-hand-side to Donald Love and Love fired a ball into the 18-yard-box towards Fejiri Okenabhire, Fey held onto the ball until he got support. Sean Goss was the first man to support. Fey laid the ball off to Goss who smashed a shot towards goal but The U’s managed to clear.

Town were having so much joy down both wings during the first half. Another chance came from Love again, down the right-wing heading for Dave Edwards but it was just over his head. The ball landed at the feet of Golbourne on the left, who fired another cross in, but Rob Dickie did well to head clear.

Minutes later, Town are still eager to break the deadlock after a great phase of play by Shrewsbury after Love’s throw found Edwards and Edwards played a ball through Oxford’s back line where Josh Laurent was making the run. Laurent ran to the by-line and fired in a low cross, but the ball was put out for a Town corner.

Sean Goss whipped in a cross and Jordan Archer attempted to punch the ball away but didn’t manage to connect well with it. Another corner for Town and this time, captain Ollie Norburn stepped up. Norburn’s ball found its way to Aaron Pierre at the back post, his free header was heading towards goal. James Henry stood tall and headed away the ball off the line.

Norburn played a huge part in the first 45 minutes. A great ball from the middle of the park flew out to Golbourne down the wing. Golbourne curled a pin-point cross onto Edwards’ head but Archer did well to keep hold of the ball and deny Edwards the breakthrough goal.

Again, captain fantastic Norburn won back possession of the ball in the Centre circle and produced a great run through The U’s midfield. Norburn was bought down by Dickie who received the first yellow of the game.

Town came close again after a well-worked free-kick saw Edwards almost bag the first goal. Norburn passed to Golbourne and Scott curled in a cross towards the back-post where Edwards was eagerly waiting. Edwards hit it first time, but Archer did well to deny him again.

Oxford thought they managed to break the deadlock after Henry found himself through on goal and put the ball past O’Leary, however the linesman had other ideas and flagged him offside. The game remained goalless.

Just shy of the half-time whistle, Oxford saw themselves having to make a substitution after Forde collided with Love and came worse off. Forde was replaced by Elliot Moore for the remainder of the game.

Shrewsbury began their second half as they ended their first half, hungry for the first goal. Town broke in the middle of the park with Norburn after a great run, Norburn played into Love down the right, Love attempted a cross but was denied as the ball fell into Archer’s gloves.

Another great chance for Town as Laurent looks to break and run at Oxford’s back line. Laurent held the play and waited for support, Laurent attempted a cross to the back post where Goss was waiting but the cross was blocked, and it was out for a Town corner. Norburn took the corner that fell nicely for Edwards, but the ball bounced off his legs into Archer’s hands.

With 30 minutes remaining, Oxford made their second change of the game. Rob Hall was replaced by Jamie Mackie. Ro-Shaun Williams was on hand to head the ball away from danger after an Oxford free-kick looked to be a threatening one.

Oxford managed to create a chance after a good phase of possession by working their way up the field. The ball reaches the box and a huge goal-mouth scramble took place and somehow the ball was put out for a corner. Oxford’s corner came flying in, well over all players in the box and out for a Town throw.

Norburn was bought down by the manager’s technical area with just under 20 minutes to go. Just before the free-kick was taken, Oxford made their third and final change as top-goal scorer James Henry was replaced by Sam Long. Whilst Ebanks-Landell received a yellow card for stopping the home side quickly taking a free-kick.

With only 15 minutes of play remaining, Sam made his first change of the day. Fey was replaced by best-mate Dan Udoh.

Matt Taylor attempted to take matters into his own hands after firing a shot from the edge of O’Leary’s 18-yard-box which saw the ball fly into row Z.

Oxford found themselves on the break after a long-crossed ball from Taylor went flying into the box and O’Leary came to the rescue to deny the home side the opening goal. Josh Ruffels was at O’Leary’s back post as the ball fell at his feet, O’Leary rushed out and blocked the ball with his legs to put the ball behind for an Oxford corner.

With only minutes remaining of normal play, Edwards picked up Town’s second yellow card of the game after he tripped Dickie in the centre circle. Minutes later, Edwards was replaced by Ryan Giles for the remainder of the game.

Pierre took a blow straight to the face after blocked a rocket-shot from Tariqe Fosu. Pierre’s blocked denied Fosu as the ball looked to be heading goal bound.

As the fourth official indicated a minimum of four minutes extra-time, Sam made his third and final change as Brad Walker came on to replace Sean Goss. Oxford managed to break and win a free kick in a dangerous area, Fosu’s strike fell nicely for O’Leary to make the easy save.

Tickets are now on sale for our Sky Bet League One trip to Grenoble Road.

We have been allocated an initial 800 tickets for the game with Town supporters.

Ambulant disabled supporters pay the relevant price (Adult/Concession/Junior) and are entitled to a PA ticket free as long as Disabled supporter is on medium to high rate disability allowance.

Tickets can be purchased from the North Ticket Office adjacent to the away turnstiles on the day, this is CASH only.

There is free car parking for up to 2,000 cars on a first come first served basis, there are areas of residents only parking in the local vicinity which are enforced. 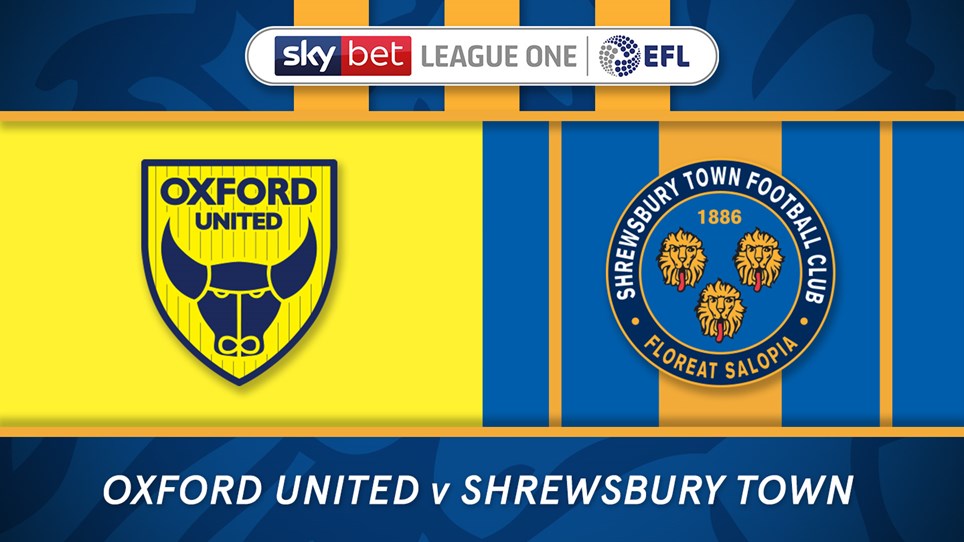