This weekend Shrewsbury Town travel south to Bristol to play Rovers as the rain and wind continue to hammer the nation. Rovers have been having a similar run of results as we have, winning once in 16 games . They currently sit in 13th place with 42 points from 32 games, four points ahead of us having played exactly the same amount of games in Sky Bet League One. Their home form has been marginally better than away with six wins and six draws from 16 games at The Memorial Stadium. Their last home win was from their last home game against Blackpool, who they beat 2-1 with goals from Alfie Kilgour and Josh Ginnelly. Blackpool had scored first after two minutes but Rovers scored twice in the second half, after Blackpool defender Ben Henaghan was sent off in the 43rd minute.

We've played each-other 69 times since our first meeting in Division 3 (south) in August 1951. We drew 3-3 away in that first game and we've drawn fifteen times since then. Overall, Rovers have had the better set of results with 30 wins to our 19. Having said all of that, we've done well at Rovers in the last couple of seasons winning 2-1 in 2017/8 and drawing 1-1 last season.

Six at home and three away.

Rovers have scored an average of 1.3 goals and conceded 1.1 in Skybet League One this season.

Their best periods of the game in terms of goals are the 15 minutes before half time and full time, scoring 6 times in each period. They also concede more goals in the last 15 minutes of the game than any other period with five conceded.

They've failed to score in just over 30% of their home games.

Shaun Whalley and Conor McAleny will both be missing because of longer term injuries, as is Ollie Norburn.

This is going to be an energy sapping game in what could be a torrential downpour if the forecast is anything to go by. Whichever team prevails, they'll have to dig deep and it may not be a great advert for the passing game. If you're off to the game, wrap up warm and dry and stay safe there and back.

Shrewsbury Town secure all three points on the road against Bristol Rovers.

Town’s afternoon in Bristol came to an end with Sam Ricketts’ men securing all three points at the Memorial Stadium.

Daniel Udoh’s second-half strike was the difference between the two sides as all three points headed back to Shropshire.

The first 10 minutes of Town’s afternoon in Bristol got underway with neither teams having clear chances in the opposition box. A feeling out process continued as Town looked to work out Rovers.

In the 17th minute, Daniel Udoh forced Jamal Blackman into making a good save. Town’s forward received the ball inside the box but the home side’s keeper converged well to parry the ball away.

Rovers number 28 Rollin Menayese was shown a yellow card just before the 30-minute mark for jumping into Udoh with unnecessary force.

Rovers’ keeper made another great save to deny Town taking the lead with five minutes left in the first-half. Callum Lang saw the ball fall to his feet but the forward couldn't beat the man in between the sticks with a powerful driven effort.

Aaron Pierre was shown the second yellow card of the game for a foul just inside the Salop half.

The half came to an end with the two teams all square. Despite chances for Town, the Rovers keeper put in a strong performance to keep his side level on the score sheet.

Max O’Leary was called into action with just minutes on the second-half clock. Alfie Kilgour jumped well to meet a cross and guided an effort towards goal. O’Leary dived well to parry the ball away from the top corner.

Jason Cummings had a chance to give his team the lead shortly after the hour mark. The forward received the ball out wide and drifted inside towards the away side’s goal. Despite a good run, Cummings couldn't find the target and the ball floated over the bar.

However, Town emphatically found the opening goal in the 70th minute. Ro-Shaun Williams’ mazing run towards the Gas’ goal gave Udoh time to find space. The defender cutely found the Salop number 23 with a short pass and the striker buried his effort into the bottom corner.

Williams was shown a yellow card just three minutes later for a late challenge in the middle of the park.

Kilgour was shown a yellow card in the latter stages of the game for a foul on Callum Lang.

The game came to an end with Town taking all three points away from home.

Tickets are now on sale for our Sky Bet League One trip to Memorial Ground.

We have been allocated 500 for the game with Town fans having the choice of seated or uncovered terracing.

Tickets are priced at Adults £12, 65+/16-21 £10, U16 £7, Carer is free of charge. Disabled/Carer tickets are reserved in the South Stand front Row A. Also Disabled/Carer is available in the terrace.

Tickets go off sale from the ticket office at 3 pm on Friday 28th February. 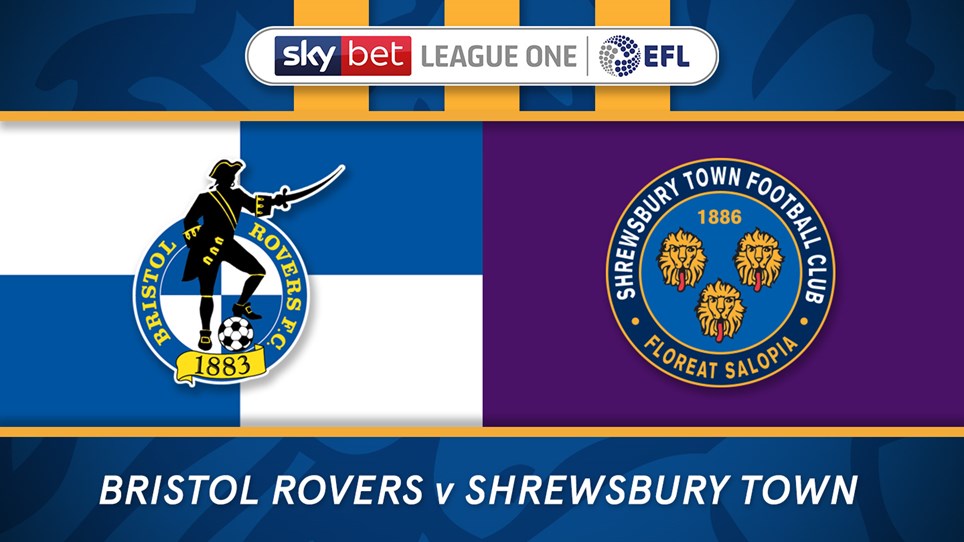