Tonight, we head to Merseyside for our Emirates FA Cup fourth round replay to face a team of youth players with Liverpool's first team currently on holiday. Jurgen Klopp won't be there either, he also needs a break from all that pointing and shouting. For many, this could prove to be in our best interests because it gives us a realistic chance to win this game although my feeling is that we can never afford to think we've won before the actual game. That sort of complacency can bring you obvious problems and criticisms. The Liverpool Under 23 team generally play in the Premier League 2 and have been used in the Checkatrade Trophy, but youth manager Neil Critchley says that the team tonight is likely to be teenagers and under 20 players.

Andrew Madley from West Yorkshire. Mr Madley has been in charge of 17 games, mainly in the top two divisions and has shown six red cards and 59 yellow. This is the first time he will have been in charge of either team this season.

As far as I'm aware, we have no new injury problems for Town, Ollie Norburn is a doubt having not played for us since the original tie against Liverpool.

Sam Ricketts has already spoken to the media about the disappointment with the way Liverpool have behaved, and I have to agree. We know we're a fly compared to the juggernaut that is Liverpool, but it feels like they've acted as if we weren't even there. I doubt they meant to do so and to be honest, we need to put this to bed and concentrate on ourselves. It's sad to see that Ollie Norburn isn't likely to play. To me, we look a more cohesive unit, but we did manage to earn this replay in his absence, so hopefully, we'll cope without him. A win at Anfield would be lovely, but I can also see benefits from not progressing, so this is one to enjoy and see what happens. Whatever the result, I think we've earned more than a little respect from this cup campaign, and I'll be coming home proud tonight.

Shrewsbury Town lose out 1-0 to Liverpool in the Emirates FA Cup.

Assistants: A. Holmes and N. Greenhalgh

Town were unable to progress past Liverpool in the fourth-round replay fixture at Anfield after narrowly losing out 1-0.

Ro-Shaun Williams unfortunately put the home side in the lead when he scored an own goal.

In the roaring atmosphere of Anfield, Shrewsbury Town started their fourth-round FA Cup replay mission brightly. Town utilised the wings well and looked dangerous on the break. Liverpool’s youngsters’ class was also there to see, with their slick passing and intelligent movement off the ball.

The Reds were awarded a free-kick near the edge of Town’s box in the 25th minute. Curtis Jones stood over the ball but struck his shot straight into the arms of Max O’Leary.

O’Leary was called into action in the 30th minute due to a great phase of attacking play from the home side. Liam Millar fired in a dangerous cross but Town’s keeper jumped well to punch the ball away.

Scott Golbourne was the first player to be booked during the game. Town’s left-back went for the ball but the referee deemed his boot to high.

Neco Williams came inches away from putting his team in the lead with 35 minutes on the clock. Town allowed Williams space on the edge of the box and his shot narrowly missed the target.

Williams was booked just four minutes later for a foul on Aaron Pierre inside Town’s box.

The half came to an end with the two teams all square after limited opportunities.

O’Leary’s quick reaction were needed once again shortly after the half had resumed. Jones received the ball inside the box and let off a powerful shot. O’Leary got down well to save the shot with his feet to keep the game level.

Town managed to find the back of the net in the early stages of the game through Shaun Whalley. However, the goal was ruled as offside via VAR.

Donald Love was shown a yellow card in the 66th minute for a foul on Adam Lewis.

As the half ticked on, the home side began to posses more of the ball. The pace and energy from the young Liverpool side was clear to see and did cause Town some problems.

The home side managed to take the lead in the 75th minute. A lofted ball came towards Ro-Shaun Williams and the defender unfortunately headed into his own net.

The game came to an end with Town losing out 1-0.

Tickets for our Emirates FA Cup Fourth Round replay with Liverpool at Anfield have now sold-out.

The 8,000 tickets went on Thursday 30th January with priority given to those supporters with season tickets, and then those with loyalty points.

Tickets moved onto general sale at 5 pm on Monday 3rd February, and the remaining 1,500 tickets were snapped up by 8 pm the same evening.

The Ticket Office is compiling a waiting list should any tickets become available, email tickets@shrewsburytown.co.uk.

If you have purchased online for collection you will be able to collect them from main reception at the Montgomery Waters Meadow, please give 24 hours for ticket staff to print and process the ticket.

Collections will be available until 2 pm on Tuesday, after that all uncollected tickets will be taken to Everton's Bullens Road ticket office.

We have arranged with Everton FC to use their Bullens Road away ticket office for collections only on the night ahead of the Emirates FA Cup Fourth Round replay at Anfield.

It is then a short walk across Stanley Park to Anfield.

We want to thank Everton for their help allowing us to use their facilities.

There is no parking at Everton so park up in the designated parking areas and then collect your tickets before taking the short walk to Anfield.

Bullens Road is close to where the away supporters coaches will park up.

Ticket collections will continue until around 8 pm to give those who may arrive late the chance to pick-up their tickets.

If you have purchased a ticket with your Season Ticket or FanCard you will need to collect a physical ticket before going to Anfield.

Town fans are advised that parking is very limited at the stadium and are encouraged not to bring their cars to Anfield stadium. 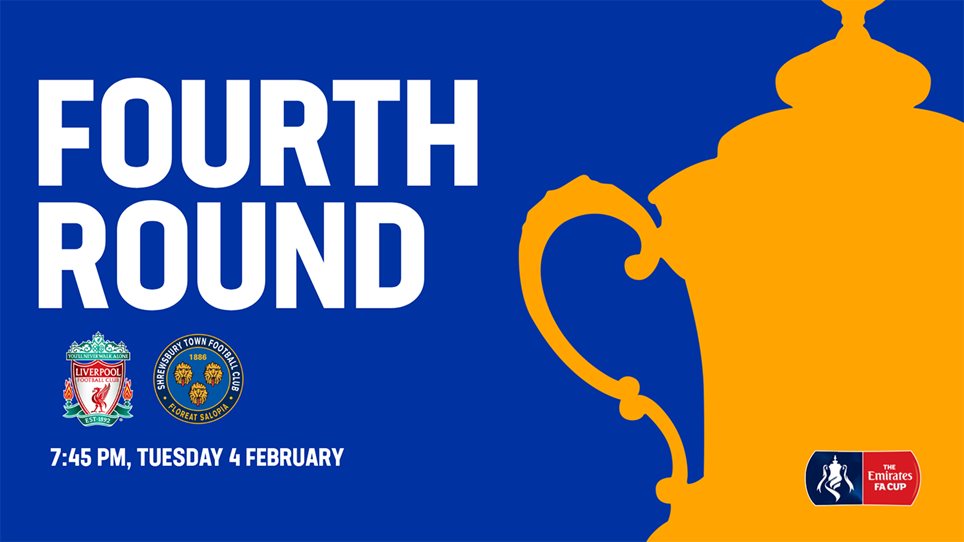