Marcus Braddock looks ahead to this weekend's trip to Portsmouth

As storm Dennis menaces the population, Shrewsbury Town's team bus heads down south to Fratton Park, home of Portsmouth. Pompey, are in a bit of a run of form at the moment having won nine of their last eleven games. However, the eleventh game in that run, the one that ended it, was away to Coventry on Tuesday in a 1-0 defeat. The two looked likely to share the points with the score stuck at 0-0 deep into the game but Matt Godden managed to find space between the defenders to slot home a looped ball into the box. It was a hard-fought game between two sides that could well win automatic promotion. Both Coventry and Portsmouth have games in hand on the teams above them which could yet prove decisive come the end of the season.

Eleven. Seven at home and four away.

Their best period of the game in terms of goals scored is the first fifteen minutes of the second half, during which they've scored six times.

Pompey's points per game at home is quite high at 2.3, well above the league average of 1.7.

They've not lost at Fratton Park all season but have drawn over a third of their home games.

Kenny Jackett and Sam Ricketts have both talked about managing the squad effectively with so many games at this time of the season. Town will be without Shaun Whalley, Ollie Norburn and Brad Walker.

When you look at our form and that of Portsmouth, you get the impression that this could be a bit of a one-sided affair. Portsmouth have just finished a good run and will be wanting to start another against a Shrewsbury Town who are feeling the fatigue of a cup run. They're not the only team suffering, Pompey have done well in the F.A. Cup with Arsenal still to face in a couple of weeks but when you're on form, it doesn't seem so debilitating. I know the chances of a Town win this time is unlikely but odder things have happened and I know we can beat Portsmouth because we did it at the start of the season. We just have to find that motivation and try and grind out a result.

Shrewsbury Town lose out to Portsmouth at Fratton Park.

Town’s afternoon in Pompey ended in disappointment, as the Shrews couldn’t secure any points against Kenny Jackett’s team.

Ellis Harrison and John Marquis were the pair who notched the goals to keep all three points at Fratton Park.

Town’s afternoon against top-six Pompey got underway with both teams looking to progress forward and create chances. As well as the home team, Town were having positive spells in the final-third. Conor McAleny continued to use his pace and dribbling to cause problems

Two players were booked for Town within the first 20 minutes. Ro-Shaun Williams and Ethan Ebanks-Landell were both shown yellow cards for fouls in the middle of the park.

Ellis Harrison came close to putting the home side in the lead with just under 30 minutes on the clock. Marcus Harness fired in a great low-driven ball but the Portsmouth number 22 couldn’t find the target from close range.

McAleny stung the palms of Alex Bass in the 34th minute after a strong effort. The forward created a yard of space for himself just inside the box and forced the Pompey keeper into a diving save.

Neither team were able to notch an opening goal in the first-half and the two teams went into the break all square.

Christian Burgess was shown a yellow card shortly after play resumed. Dan Udoh smartly dribbled past his man but was brought to the ground by the defender. The resulting free-kick narrowly missed the target for Salop.

Town were knocking on the door and nearly found a way through in the 55th minute. Kayne Ramsay found himself in great space on the wing and narrowly missed a Town forward with his driven cross.

Just seconds later McAleny managed to test the Pompey keeper again. The forward latched onto a poorly cleared ball and found the target with a half-volley. Unfortunately for Town, the keeper was equal to the effort and parried the ball away to safety.

The home side were the team who managed to find the break though goal. Ellis Harrison met a cross near the back post to head home the opener in the 64th minute for Pompey.

Kenny Jackett’s men began to have more chances as the clock ticked towards the 90th minute. Pompey’s pressure eventually told as the home side managed to double the lead. John Marquis found space in the Town box and slotted home into the right corner of the net.

Sean Goss was shown a yellow card in the latter stages of the game for a foul on Marquis.

The game came to an end with Town unable to secure any points against the home side.

Tickets are now on sale for our Sky Bet League One trip to Fratton Park.

The game is an ALL-TICKET fixture so no tickets will be available for purchase on the day.

We have been allocated 400 for the game with Town fans housed in the Milton End Block MER.

Wheelchair users can contact PFC Ticket Office on 0345 646 1898 to buy but the Wheelchair and Carer spaces are located amongst the home wheelchair section in front of the Fratton End. 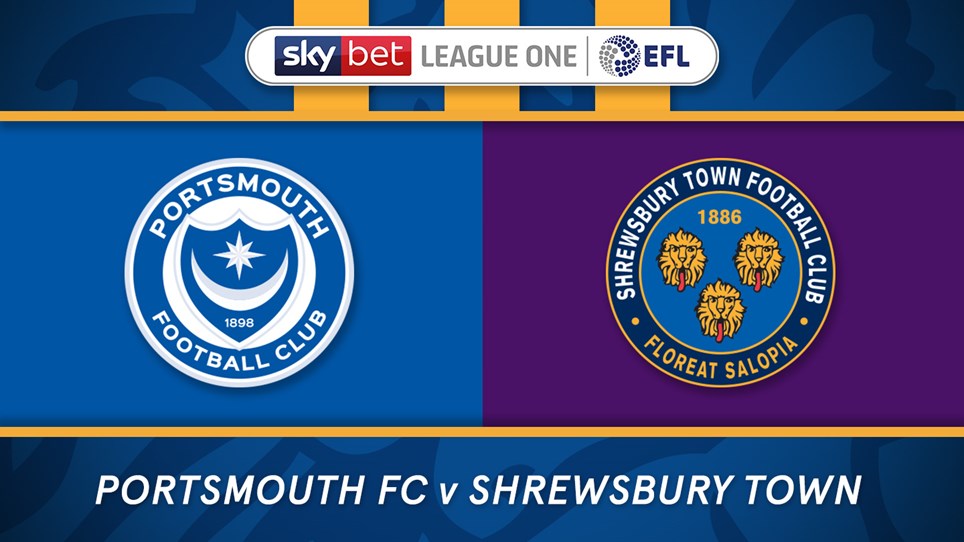