Following on from Wednesday's damp squib in Gillingham, Town travel to Rochdale this weekend. Currently sitting in 18th position, Dale have had a difficult few weeks since just before Christmas with only two wins and six defeats in their last ten games. They last won at home on January 11th when they beat Bolton Wanderers 2-0 at home with goals from ex-Town man Jimmy Ryan and Luke Mathiason. Their other win in their last ten games was a 2-1 away win at Accrington with goals from Ian Henderson and Stephen Dooley.

When we last met Rochdale in mid-August at Montgomery Waters Meadow when honours were even, and no goals were scored. It was our 51st meeting and the 11th draw between the two teams, with Rochdale historically the better team with 24 wins to our 16.

Top goalscorer for Dale is veteran striker Ian Henderson who is proving that he's as good as ever with 14 goals in all competitions. The ex-Norwich and Colchester front-man has played more games for Rochdale than any other team with well over 300 games under his belt. In that time he's scored liberally with 121 goals since joining Dale in 2013. Midfielder Callum Camps is the second-highest goalscorer with eight, including 2 in cup competitions. The 24-year-old is a successful product of Rochdale's youth system and made his debut as a 17-year-old in 2013 in a 2-2 draw with Port Vale. Camps is also Rochdale's top goal creator with five assists so far this season, with Ex-Manchester United youth player Oliver Rathbone the next highest with three in all competitions. At home, they've failed to score in 31% of their games and have lost without scoring in 23%.

Dale have kept six clean sheets this season, three at home and three away from home. They've also conceded 19 times, four more than they've scored, which is pretty similar to the clubs around them.

They score more goals in the first half with 57% but have conceded 63% in the second half. The most noticeable period in the game defensively is the 15 minutes after half time, during which they've conceded six, more than in any other period. Their best fifteen minutes in terms of goalscoring is the final 15 minutes of the first half with five. Oddly, they don't finish the second half so well with just one all season.

The man in the middle this weekend is Carl Boyeson from East Yorkshire. Mr Boyeson is a hugely experienced referee who started his career in 1993 in Hull. He has hundreds of games under his belt and should be a well-known name to many football supporters. He was last in charge of a Town game in September when we drew 0-0 away with Rotherham. In his games this season, he's dished out 50 yellow cards and just three red cards.

Rochdale will be without goalkeeper Rob Sanchez and influential midfielder Callum Camps this weekend, while Town will be without Josh Vela, Romaine Vincalot with Ollie Norburn looking doubtful. In their pre-match interviews, both managers mentioned the schedule of games and their efforts to prepare well enough in the time available.

The actual game looks to be another difficult one. As highlighted by Sam Ricketts, Rochdale like to pass the ball about a bit, which may suit us better than Gillingham's more direct approach on Wednesday. We're probably fortunate that Callum Camps is out of action because he's a real danger for Dale, but that doesn't mean there isn't a decent replacement for him and an unknown quantity to deal with. I'm hoping for a less jaded performance than on Wednesday. It's relatively common to see a little bit of a dip after a big game like the Liverpool one. We see a similar thing in the changeover from Champions League to Premier League only on a larger scale. Hopefully, we're now fully recovered and raring to go because a point or three would be handy while we still have games in hand.

Town narrowly lose out 1-0 to Rochdale.

An 88th minute goal settled the game as Rochdale secured all three points against Town.

Tyler Smith was the player on the score sheet for the home side as he managed to notch a goal in the 88th minute.

Debutant Conor McAleny nearly began his Town career in the perfect way by going close to taking the lead for his team. The forward intercepted a Dale pass but the home side defender recovered well to block his shot.

The home side continued to pass the ball around the pitch, as Town would have expected. However, it was Town who looked the most dangerous on the break. The Salop front three continually pressured The Dale defence and began to force mistakes.

Town had a penalty claim denied in the 25th minute. McAleny danced around a number of Dale defenders before Eoghan O’Connell barged the forward onto the floor.

Jason Cummings was the next player to go agonisingly close for Town. Josh Laurent counter-attacked well towards The Dale box and played the striker through. Cummings let off a powerful effort but Robert Sanchez was equal to the shot and parried the ball away.

The half came to an end with the score level. Town grew into the game and began to control vast amounts of play and continually troubled The Dale but didn’t find the finishing edge.

Town started the second-half brightly and were the team in the ascendancy. Donald Love was key for Town as his crosses into the box repeatedly made the home side work to keep Salop away.

Laurent came close to breaking the deadlock in the 58th minute. Love fired in a driven cross and Laurent was in the box to meet the ball. Unfortunately for Town, his contact wasn’t strong enough and the keeper cleared the ball.

The Shrews were knocking on the door and nearly broke through with just over 60 minutes on the clock. Callum Lang got on the end of a ball inside the box but his driven effort was well denied by the keeper.

With less than five minutes on the clock, the home side managed to nick a goal against the run of play. After a goalmouth scramble, Tyler Smith managed to stab home from close range to find the opening goal in the 88th minute.

The game came to an end with the home side securing all three points.

Tickets are now on sale for our Sky Bet League One trip to Crown Oil Arena.

We have been allocated an initial 400 tickets for the game.

Ambulant disabled are charged at the appropriate age band rate for their ticket, however, should they need a full-time carer to accompany them, the carer is admitted free of charge. Proof of carer status of middle to high disability is required.

When buying tickets for young person please bring photographic ID which includes their date of birth. Rochdale AFC do not offer student concessions. 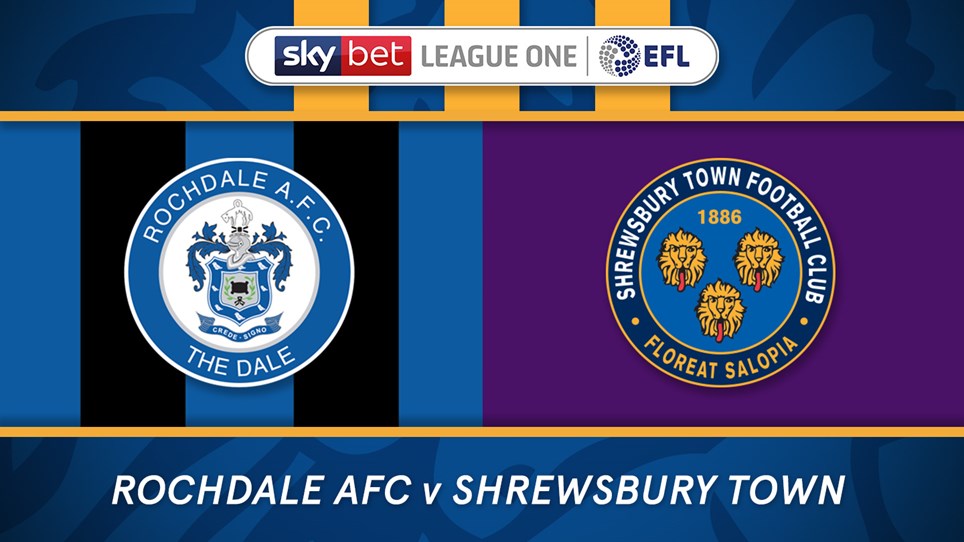