Marcus Braddock looks ahead to tonight's trip to Doncaster Rovers

Tonight, Town travel to Doncaster Rovers' Keepmoat Stadium for our 22nd Skybet League One game of the season. Rovers are just behind us in 15th position although they've played one game less and have one less point, so a good result for one side over the other side would come in rather handy. They started the season quite well with a six-game unbeaten streak in the league, only tasting defeat in the EFL Cup at the hands of Grimsby. Their first league defeat came in mid-September at Blackpool, and although they were unbeaten in their next two, it was the start of a more mixed spell of results which has seen them drop down the division. Their last five results have seen them draw twice, lose twice and draw once which included wins at home to Oxford and away at Peterborough.

Clean Sheets
Three at home and Two away.

Summary
Another difficult game tonight against a team that should be well motivated for tonight's game, with the possibility of going two points clear of us with a game in hand. However, Rovers haven't got the best home record this season which also needs to be factored in. The biggest couple of factors for me are the two wins in their last three games against solid sides. Limiting Peterborough and Oxford's goalscoring is no mean feat, and I wonder if it signals a post-Christmas recovery. Our own away performances have been pretty good, we're unbeaten in our last six away games in all competitions, so it's likely to be a tight game.
COYB!!!
Marcus

Shrewsbury Town fall to a 2-0 loss at the hands of Doncaster Rovers.

A disappointing away trip for Salop came to an end with Doncaster Rovers securing all three points.

Goals from Niall Ennis and Tom Anderson was the difference between the two sides as Rovers registered a 2-0 win.

It wasn’t the start Sam Ricketts’ men would have desired at the Keepmoat as Niall Ennis managed to put the home side in front within five minutes. Ethan Ebanks-Landell’s attempted headed clearance found its way to Ennis who had the easy job of heading home from close range.

Despite going a goal down during the early stages of the game, the Shrews continually looked dangerous in the Doncaster half during the first 30 minutes. Ollie Norburn and Scott Golbourne were the brighter sparks for Town as Ricketts’ men looked to play their way back into the game.

Ennis came close to doubling the score for Rovers in the 36th minute. The striker met a great floated cross but couldn’t guide his effort towards goal as Max O’Leary rushed from his line.

A tightly contested half came to an end with Rovers going into the break with a one-goal advantage.

The home side started the second-half in similar form to the first. Ennis had another chance to fire in an early goal for his team. The striker managed to get one-on-one with O’Leary but Town’s keeper made a great save to push the ball away from danger.

Ebanks-Landell was shown a yellow card in the 55th minute for a foul in the middle of the park.

Town continued to push for an equaliser and received a number of free kicks around the home side’s box. Despite playing in a number of crosses, Town were unable to convert and were left frustrated with just over an hour on the clock.

Aaron Pierre made a vital block for his team with the clock ticking towards 70 minutes. The defender’s awareness allowed him to get in the way of a close-range shot that looked destined for the back of the net.

The home side managed to find the back of the net with 15 minutes left in the tie. Tom Anderson rose well inside Town’s box to beat his man and head the ball home for 2-0.

The game came to an end with Salop unable to break down the Rovers defence as the home side secured all three points.

Tickets are now on sale for our Sky Bet League One trip to the Keepmoat Stadium.

We have been allocated an initial 502 tickets for the game.

Ticket sales and collections on the say will be from the Club Doncaster Academy reception from two hours prior to kick-off onwards. This is located next to the away turnstiles.

Tickets go off sale from the STFC ticket office at 12 noon on Tuesday 7th January. 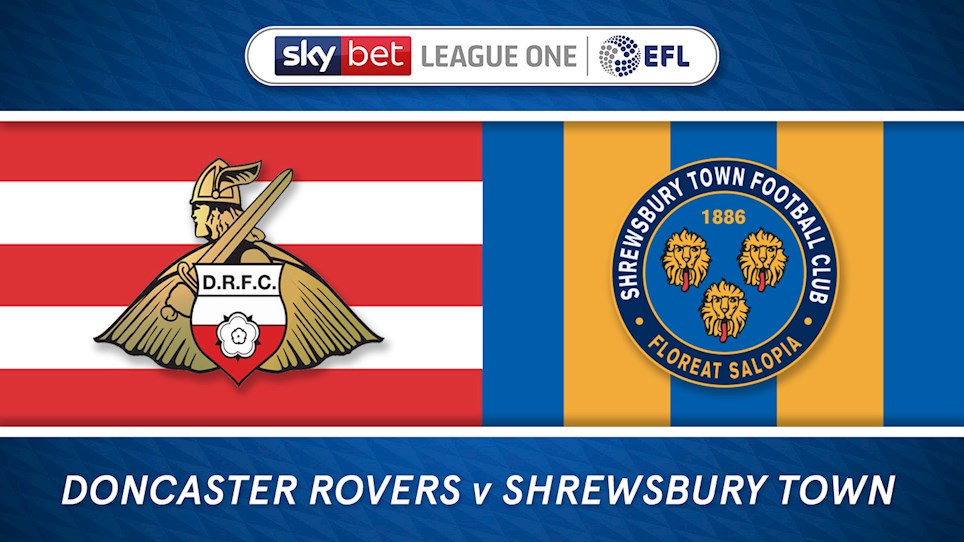