With the noise of Sunday night still ringing in their ears, Shrewsbury Town head south to Kent and Gillingham. Wins have been as hard to come by for the Gills this season, they had to wait until the last day of August to see their first and had a further fortnight to win for the next. This pattern has been followed pretty much all season with a win every two or three weeks. When wins have been consecutive, they've been in different competitions, meaning there have been no back to back league wins all season. The first round of the F.A. Coincided with an improved patch of form and since then, the Gills have only lost twice in all competitions, including a defeat at home to Premier League West Ham in the F.A. Cup and an away defeat to AFC Wimbledon. If you exclude the West home defeat, Gillingham haven't lost since November 23rd and haven't lost at home since the start of that month with Rotherham beating them 3-0.

Five at home and four away from home.

Gillingham tend to finish strongly with eleven goals in the last fifteen minutes of either half.

They also start the second half well with 5 goals in the fifteen minutes after half time.

They've conceded eight goals in the final 15 minutes of the first half than they have in the rest of the game combined.

Gillingham have no new injury concerns.

Ollie Norburn might be a doubt after limping off against Liverpool. New signing Josh Vela has taken a knock in training and is out of action temporarily.

This is another really important game for both clubs. For Gillingham, a win will put some distance between them and the teams below and also propel toward the top ten. For us, a win would mean leap-frogging Gillingham with a couple of games in hand still to play. If we have any serious thoughts of a decent position at the end of the season, this is where we need to start. Any remaining stardust from higher-profile games needs to be shaken off. As lovely as a cup run is, we need to stay focussed on the essential work in League One. Liverpool certainly aren't letting it get in the way and we should try and do the same.

Shrewsbury Town lose out 2-0 on the road against Gillingham.

Town’s evening in Gillingham didn’t go to plan as the home side managed to beat the Shrews 2-0.

Two first-half goals was the difference between the two teams as The Gills secured all three points.

Town’s evening in a cold Gillingham got underway with both teams looking to apply pressure in the final-third. Daniel Udoh and Callum Lang’s pace continually looked a threat as The Shrews looked to break down the home side.

Town came close to breaking the deadlock just after the 20-minute mark. Udoh fired a powerful cross along the box but Shaun Whalley couldn’t aim his headed effort towards goal and saw the ball rise above the bar.

Despite Town going close, it was the home side who managed to notch the first goal. Stuart O’Keefe picked up the ball just outside the box and beat Max O’Leary with an effort that nestled in the bottom corner.

The away side were awarded a penalty in the 39th minute. Ethan Ebanks-Landell was beaten for pace and fouled his man just inside the box. Oliver Lee stepped up and calmly slotted the penalty away for his team.

The half came to an end with the home side earning a deserved two-goal advantage.

Town started the second-half brightly and nearly pulled a goal back through Josh Laurent. The midfielder struck an effort from outside the box but narrowly missed the target and saw his effort rebound away off the post.

John Akinde was shown a yellow card in the 62nd minute for a foul on Ryan Sears.

The home side were the team in the ascendancy as the game ticked towards the 70-minute mark. Ben Pringle proved to be a threat on the left-wing and continually made Town’s defence work.

The Gillingham boss, Steve Evans, was booked by the referee for throwing the ball away in the 73rd minute.

Sam Hart was also booked minutes later for a foul on the by-line.

Town were trying to force themselves back into the game but found it difficult to break down the home side’s defence. Laurent came close when he found half-a-yard of space in the box but couldn’t hit the target.

The game came to an end with the Shrews losing out 2-0.

Tickets are now on sale for our Sky Bet League One trip to MEMS Priestfield Stadium.

We have been allocated an initial 240 tickets for the game.

Disabled supporters pay the relevant price and are entitled to a Personal Assistant ticket free of charge, as long as they are in receipt of the higher rate of DLA or Enhanced level of PIP.

There will be a £2 increase on all tickets on the day of the game. 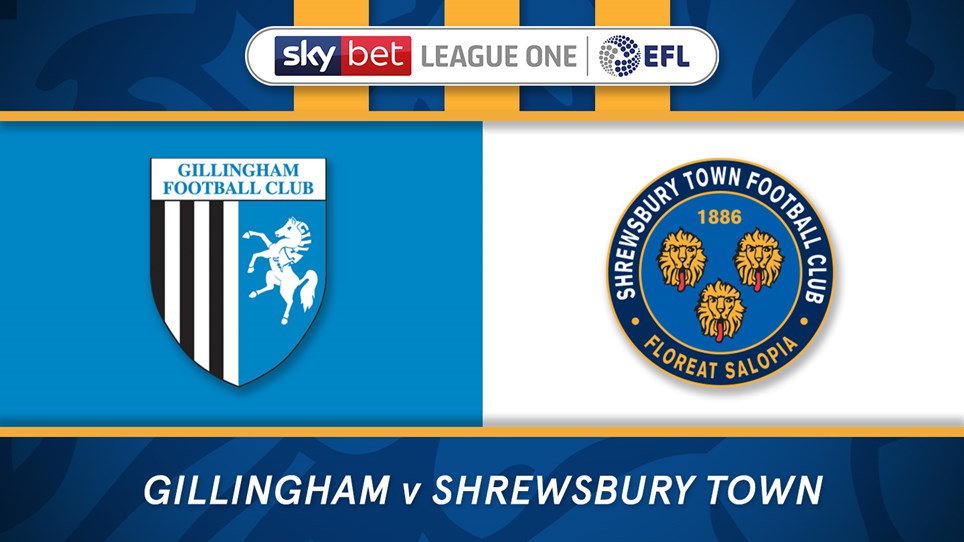