This weekend, The Emirates F.A. Cup rolls into town again for the fourth round and as you may have read, we got a pretty decent draw. This brings with it, a full house and the all too brief glare of the worlds football media. There is a chance that this could be the biggest game that I'll ever write a preview for, so I'll try to keep mistakes to a tolerable level.

Our opponents are the current World and European champions and are so far unbeaten in what is increasingly looking like their first Premier League title. They have been beaten a couple of times in the cups this season with Napoli winning 2-0 at home in the Champions League in September and Aston Villa knocking them out of the League Cup in a 5-0 home win against a less familiar-looking Liverpool team.

The likelihood is that some of those less well-known names will be featuring but there was a sprinkling of start dust over the squad that faced Everton in the third round. In recent weeks, Mr Klopp has made his feelings known about the rate of games for the more successful teams. In all honesty, I can't say that I disagree with him but it would be nice to see some of the biggest stars of the game, bathed in Salopian floodlights.

The last and only time we've played Liverpool in a competitive game, I couldn't get a ticket so I went fishing. Although I caught a solitary Gudgeon that day, I may have got the better end of the deal as Town were well beaten in a 4-0 defeat which included goals from Stan Collymore, Jason McAteer and Robbie Fowler.

In the Premier League, Mohamed Salah and Sadio Marne have scored eleven goals each and both have four goals from cup competitions. Roberto Fimino has seven in the league and a couple in the cup competitions although those two were both winning goals in their two World Club Cup games.

In a team full of world stars, the top assist provider this season is Liverpool born, Trent Alexander-Arnold. Operating on the right flank, Alexander-Arnold seems equally adept going forward as he is defensively. The 21-year-old has also represented England throughout his youth career and has now made the progression to the full team with 9 appearances and one goal so far.

Since they won the World Club Cup, Liverpool have conceded one goal, that's one in eight games. In their last fourteen, they've only conceded in three games, once in the semi-final of the world club cup, five times against Villa, and once on Thursday night against Wolves. Throughout the season they've kept thirteen clean sheets in all competitions.

Josh Vela and Sam Hart are both available. Ryan Sears and Romain Vincalot will miss out.

Liverpool are likely to be vastly changed compared to the squad that beat Wolves.

Liverpool are an excellent team in excellent form, so it's safe to say that they'll push us as hard as anyone this season. I'm not being defeatist when I say this, but there's a chance we may have to go to a replay. Lame jokes aside, if you look at the bookies, there is one obvious favourite but the odds of a Town win aren't as stratospheric as you might imagine.

The conventional wisdom says that clubs like us should just enjoy our day in the spotlight and give a good account of ourselves. That might be decent advice but I hope we don't pay them too much respect, we'll get nothing from standing off and letting them play their game.

Wolves were very close to a result on Thursday night and I notice that when pressed Liverpool looked less assured, so maybe that's the way to go. I honestly think we can get a positive result, regardless of how good a team Liverpool are but we need to be pretty much immaculate to do so. As has already been mentioned, there have been bigger upsets. Back in the early years of the century, we beat Everton when they were one of the best teams in the country when we were in League Two. Everton named a full-strength side that day and we still beat them, so we all know what's possible. However, my expectations are realistic even if my hopes are a little high.

Shrewsbury Town hold Liverpool to a 2-2 draw in the Emirates FA Cup.

Shrewsbury Town upset all the odds to earn a 2-2 draw against Liverpool in the Emirates FA Cup fourth-round.

A strong second-half performance from The Shrews saw Sam Ricketts’ men pull back from 2-0 down.

Right from the first whistle, the away side’s class was there for all to see. Despite Town having good possession and causing problems, it was the Reds who capitalised on their first chance. Curtis Jones received a through-ball just inside the box and slotted home the opener.

Town had their own chance to register a goal against the European Champions in the 24th minute. Ollie Norburn put Shaun Whalley through clean on goal but Adrian made a good save to deny the forward’s effort.

Callum Lang and Whalley were the two Salop players who looked dangerous on the break. The pair often picked the ball up deep and countered on the Reds defence but neither were able to break through.

With just over five minutes left in the half, Whalley nearly pulled Town back onto level terms. The winger again found space in the box but dragged his shot just wide of the post.

Despite Town’s best efforts, the away side went into the break with a one-goal advantage. Both teams had chances, but the Premier League outfit were able to capitalise.

The second-half started in the worst way possible, with the away side gaining another goal. Donald Love was the unfortunate player for Town who scored an own-goal as he tried to clear a Liverpool cross.

Josh Laurent nearly pulled a goal back for Salop with 10 minutes gone in the half. The midfielder picked up the ball just inside the box but couldn’t guide his driven effort on target.

The Shrews were getting chances and nearly made one opportunity pay off. Lang saw himself through on goal but the striker couldn’t notch a goal for Town from a tight angle due to a great save from Adrian.

Town were awarded a penalty in the 66th minute as Laurent was fouled inside the box. Jason Cummings stepped up and pulled Town back into the game with a low driven effort into the corner.

Against all the odds, Salop managed to fire level through Jason Cummings with 15 minutes to go. The striker found space in the box and slotted the ball into the corner of the net from close range.

The game came to an end with Salop earning a replay fixture at Anfield.

We are now sold out of tickets for the Emirates FA Cup game with Liverpool. The Ticket Office are keeping a waiting list in case any tickets become available, if you want to go on it email tickets@shrewsburytown.co.uk or visit the Ticket Office. 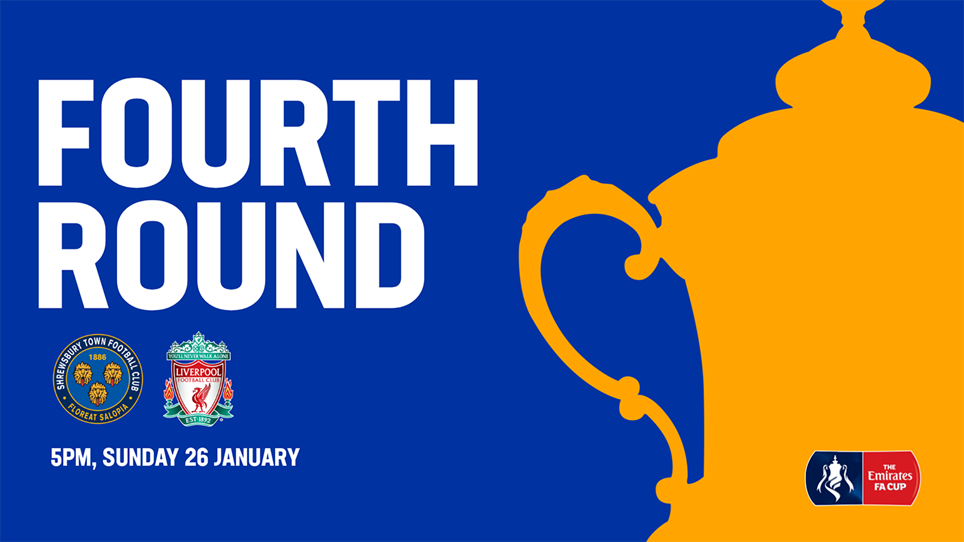