Marcus Braddock looks at this evenings game with Peterborough United

Having narrowly lost to 2nd placed Wycombe on Saturday, we play Peterborough tonight with home advantage. After a 3 game wobble at the start of the season when they lost to Fleetwood and Oxford (twice), Posh have only lost twice in Skybet League One. Having scored three or more goals on seven occasions so far, their main strength looks to be a tendency to score plenty of goals. Their eight clean sheets so far in all competitions also hints at a solid defence so tonight may be our sternest test in the league this season.

We've played posh 54 times in cup and league and things are all square with 18 wins each and 18 draws. Just to add to the symmetry, we've also beaten each other once each in the F.A. Cup.

Posh don't seem to have any serious injury worries.

Ro-Shaun Williams will be suspended after his sending off on Saturday, we’re still missing

Ryan Giles and Daniel Udoh who both have knee injuries and Romaine Vincelot who will be out for a fair while yet.

Sam Ricketts has spoken about the threat that Peterborough pose going forward whilst Darren Fergusson has suggested that things won't be easy with our tight defence.

Predictably my first observation is that tonight will be a tough game with Posh scoring for fun this season. They already have two strikers in double figures this season, more than some strikers score in a season. They're going to be difficult to hold, let alone beat but we've tackled teams in good form before and we've got the players to do so if they play to their potential. 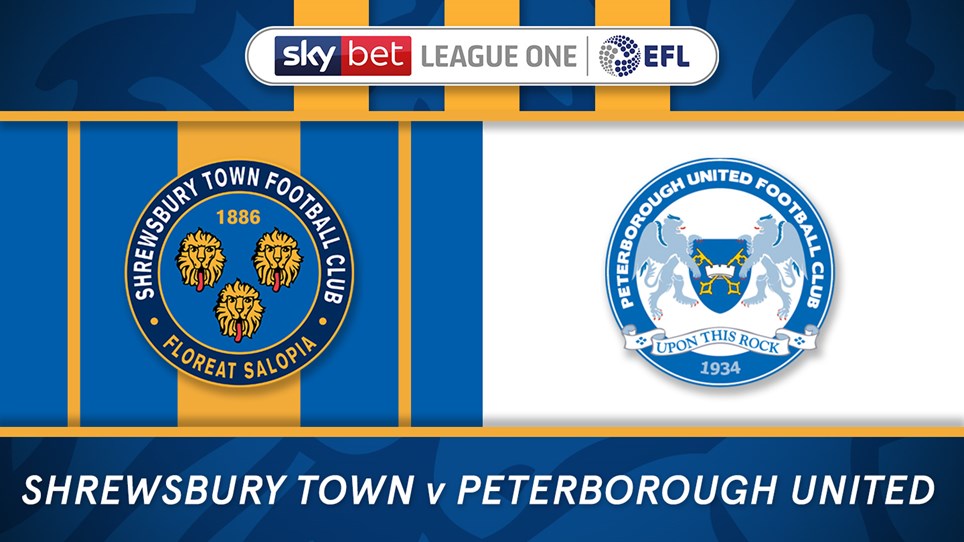 A resolute and brave performance against an in-form Peterborough United saw Shrewsbury Town secure all three points at the Montgomery Waters Meadow.

A first-half goal from Ethan Ebanks-Landell and a penalty save from Joe Murphy ensured Town added another three points to the Sky Bet League one table.

Shrewsbury Town’s fixture with Peterborough United got off to a positive start, with the home side looking to force play in the Posh final third. Town were rewarded for their effort with a succession of corners within the first 10 minutes but couldn’t make the pressure count.

Town were faced with a moment of danger in the 25th minute, as the away side were awarded a free kick on the edge of the box. Marcus Maddison stood over the ball and let off an effort towards the Town net. Fortunately for the home side, the ball rebounded off the Shrews wall and out for a corner – a corner that didn’t trouble Joe Murphy.

It was the home side who were beginning to have success with the ball, particularly on the wings. Donald Love and Shaun Whalley were combining well to ask the away side’s defence questions. Despite managing to fire balls into the box, the Peterborough defence were remaining resolute.

Dave Edwards was gifted a golden chance to put Town in the lead with the clock running down towards the half-time interval. Town’s number four got on the end of a misplaced pass and was bearing down on goal. However, the midfielder was unable to hit the target and struck the ball wide.

In the 42nd minute, Posh forward Ivan Toney was given a yellow card from referee Darren Handley for a foul on Aaron Pierre the defenders’ half.

Town’s persistence finally paid off just before the half-time whistle with the Shrews notching a late goal. A free kick was stuck into the away sides’ box, and after a goalmouth scramble, Ethan Ebanks-Landell managed to poke home the go-ahead goal for his team.

The away side were handed a great opportunity to pull back on level terms with just five minutes into the second period, as Darren Handley awarded Posh a penalty due to an Omar Beckles foul. To the joy of the Town faithful, Murphy stepped up and made a great save to keep his side in the lead.

Edwards was given the third yellow card of the game for a foul on Nathan Thompson on the Posh final third.

Both teams were battling hard for the ball in the second period, with the bulk of the action taking place in the middle of the park. Despite Posh looking to force themselves back into the game, the Town midfield did a good job of nullifying the away side’s advances and space was closed down.

Louis Thompson was booked in the 77th minute for dissent.

Despite being the team in the lead, Town were still pushing to add another goal on the score sheet. Whalley continued to be a pain for the Posh back line and persistently looked to advance into the final third to ask questions.

Murphy was given a yellow card in the final moments of the game, as the referee deemed the keeper to have wasted time.

The game came to an end with Town securing a much-deserved win against the visitors, ensuring the three points remained in Shropshire.

Tickets are now on sale for our home game with Peterborough United.

Ticket prices for a 2019/20 Sky Bet League One fixture can be found here.