This weekend sees Shrewsbury Town travel to Buckinghamshire to face this seasons surprise package, Wycombe Wanderers. So far, it's been a season to remember for the Chairboys who currently sit in second place in Skybet League One with just one defeat from their fifteen games. That defeat, away at Gillingham saw them lose by two goals, a result that seemed unlikely before the game. Only two teams have taken any points at Adams Park this season, Peterborough who shard six goals in a 3-3 draw and Accrington who got away with a 1-1 draw. At home, the Chairboys have kept clean sheets against Portsmouth, Sunderland and Bolton Wanderers but have conceded three goals on two occasions.

Akinfenwa is also top on assists with four with Anthony Stewart and Nick Freeman on two each from defence and midfield respectively.

We've played Wycombe 26 times and we've never won at Adams park in the league. We have drawn there six times including five 1-1's. Our best result against them in any competition is the 0-7 in the Football League Trophy in 2008 and our worst result at Adams Park is a 3-0 win from 1997 in League Two.

Our referee this weekend is Brett Huxtable from Devon. Mr Huxtable has been a Skybet Football League referee since 2016, a season that saw him take charge in our 0-1 win at Scunthorpe and our 2-0 defeat at Bristol Rovers. He was also in charge of our 2-1 defeat at Plymouth last season and our 1-0 defeat at Milton Keynes earlier this season. He's dished out  45 yellow cards but no red ones in his 12 games this season.

It's still too soon to expect to see Ethan Ebanks Landell  but he has returned to training. Ryan Giles and Daniel Udoh both have knee injuries and Romaine Vincalot will be missing for a fair while yet.

As ever, I think this is going to be a difficult one. Wycombe are in great form and looking difficult to beat. Add to that that we've not beaten them at Adams Park in the League and it begins to look like a very difficult task indeed. They defend well as a team and have threats in all sort of areas, meaning we'll be well tested this weekend. Having said all of that, we weren't expected to beat Sunderland but we did.

Sam Ricketts marked an unchanged starting 11 as Town travelled to Wycombe earlier this afternoon. Town saw defender Ethan Ebanks-Landell return to the bench after being side-lined for a few weeks after picking up an injury.

Max O’Leary currently has seven clean sheets out of fourteen games for Town and he will want to make it fifteen as Town look for three points at Adams Park.

Two of Wycombe’s starting 11 have featured for Town previously, Joe Jacobson and Jack Grimmer both star in Gareth Ainsworth’s team and will look to continue their unbeaten run at home.

A dominant first half for Town after having many chances but struggled to break the deadlock. Town were the team on top for the first 45 after creating good place, having great chances and overall being the dominant team.

Town’s first chance of the game came within the first ten minutes of play. Donald Love fired a rocket towards Ryan Allsop’s bottom right corner forcing him to get down, however Love’s shot was the wrong side of the post.

Minutes later, Jason Cummings joined in on the action after being through on goal and having the ball forced onto his right foot. Cummings fired a shot towards goal by Wycombe’s backline did well to block and clear the ball away from danger.

Shrewsbury were dominant, hungry for the first goal. A great switch of play between Town’s wingbacks as Love on the right fired a ball across field to left wing-back Scott Golbourne. Golbourne bounced a ball into Cummings and Cummings, with his back towards goal, managed to turn away from Wycombe’s defence and force a shot.

Again, Golbourne and Love linking up well between themselves and across field. This time, Golbourne floated a cross in towards the back post of Allsop’s goal where Dave Edwards and Cummings were waiting to receive the ball. Cummings knocked the ball onto Josh Laurent who was eagerly waiting for the ball, Laurent attempted a curing left-footed shot, however Laurent couldn’t find the target.

It was time for Shaun Whalley to join in on the action too after Cummings and Love linked up well down the right-hand side. Love found Whalley who was lurking on the edge of Wycombe’s 18-yard-box but Whalley struggled to get the ball out of his feet in time before the ball was cleared away.

Strike partners Whalley and Cummings produce great football between them both after Whalley held the ball up waiting for Cummings to come and join him. Cummings shot and made Allsop stumble and run the ball out of play behind his own goal for a Town corner.

Wycombe’s first effort on goal came just shy of the half hour mark. A long ball from Allsop finds Adebayo Akinfenwa as he bought it down for Scott Kashket. Kashket’s shot was softly driven towards shot-stopped Max O’Leary making it an easy save.

Love made a great challenge in the middle of the field to win Town possession back. Love played in Josh Laurent who went on a great run through the midfield and defence. Laurent found Cummings down the left hand-side and Cummings fired in a low dangerous cross back to Laurent, however, Laurent’s touch was heavy, and the ball ran out of play. Another great chance by Town but were unlucky not to get on the scoresheet.

Town came out in the second half as they ended their first half, dominant and eager for the first goal. A great phase of play by Town, especially down the right. Cummings chased down a long ball and held the play up whilst he waited for Whalley to join in. Cummings played the ball to Whalley and Whalley floated in a cross towards the back post where Golbourne was waiting. Golbourne’s header was just over the bar.

It took Wycombe 50 minutes to get into the game. Their first chance of the second half came after Kashket beat Beckles and Ollie Norburn to the ball. Kashket crossed the ball into Akinfenwa as he waited for the ball inside of the box. Akinfenwa struggled to get the ball out of his feet. The ball landed to Dominic Gape on the edge of the box but his shot was fired well wide of O’Leary’s goal.

Wycombe began to come eager and hungry to score and break the deadlock. A ball cleared off the line by Ro-Shaun Williams after Curtin Thompson fired in a low cross. A corner ball fell to Gape on the edge of the box. Gape connected with it on the volley, but he sliced it wide.

Minutes later, Wycombe were on the attack again. This time the hosts managed to break the deadlock. Rolando Aarons hit the back of the net from inside the 18-yard-box to give Wycombe the lead.  Town hit back instantly after Cummings fired a well taken shot but couldn’t hit the target.

With twenty minutes to go, Town created a great chance after a great spell of possession. Cummings, Whalley and Norburn played between them and the ball fell to Norburn on the edge, Norburn fired a shot at Allsop but the shot was off target.

For the last twenty minutes Town made two changes. Sean Goss and Ferjij Okenabirhie came on to replace Josh Laurent and Dave Edwards.

A late challenge on Okenabirhie from Anthony Stewart and Town were awarded a free-kick a yard away from the penalty area. Whalley stood over the ball in an attempt to curl it into the top right of Allsop’s goal but the shot was off target.

A quick-thinking free-kick from captain Norburn, found Cummings with plenty of space around him mid-way into Wycombe’s half. 30-yards-out and Cummings fired a shot at Allsop.

A huge chance came for Town with just only five minutes of play left. Goss in the midfield played a class ball out to Love on the right hand-side, Love hit a first time cross into the box that landed perfectly on Norburn’s head, but he couldn’t convert it. Norburn was in acres of space but just couldn’t find the target.

Sam Ricketts made his third and final change with only minutes remaining. Donald Love was replaced by Louis Thompson.

Ro-Shaun Williams saw his second yellow card in the space of 10 minutes as the game began to end. Williams’ second yellow was awarded after raising his hands onto Akinfenwa’s chest. A frustrating afternoon for Town at Adam’s Park but Town will look to put things right Tuesday Evening as they host Peterborough United at Montgomery Waters Meadow.

Tickets are now on sale for our Sky Bet League One trip to Adams Park.

We have been allocated an initial 500 tickets for the game with Town supporters housed in the Away Lords Stand with unreserved seating.

Ambulant disabled tickets are shared at the relevant price category and can be booked through the STFC ticket office. Wheelchair users must book through then WWFC ticket office where they will be allocated on a first-come-first-served basis. Please note that a disabled person is only entitled to a free carer’s ticket if they are medium rate disability or above, proof must be provided.

The collection point for any tickets is ‘The Blue Pod’ which is next to the club shop.

Checks will be in place on the day of the game and anybody who has purchased age-related tickets will be asked for proof when entering the ground. Failure to do so will result in a full adult price being charged.

Tickets go off sale from the STFC ticket office at 3 pm on Friday 1st November. 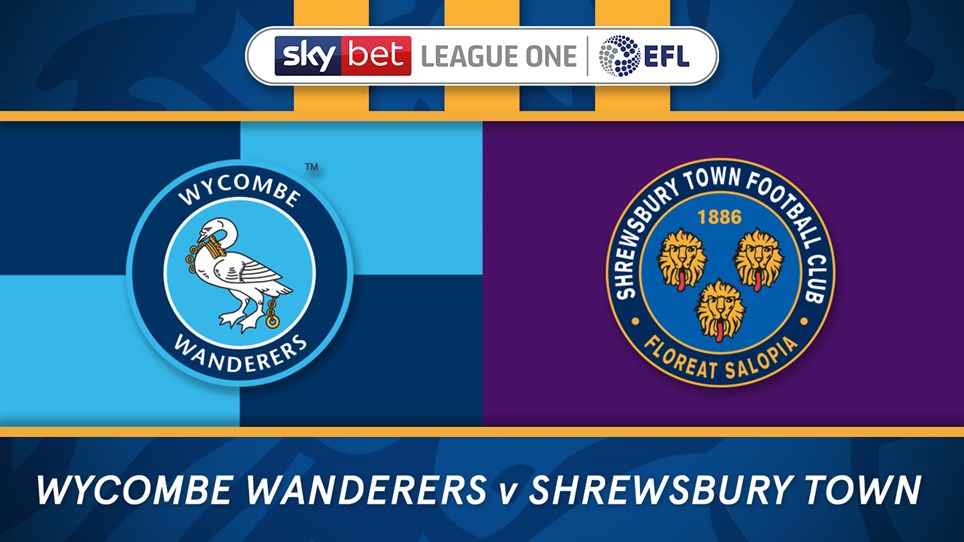